In a BBC Radio 6 interview, Paul McCartney said he enjoys Bob Dylan's cover of the Beatles' "Things We Said Today" on a new Macca tribute album:


"[With] his croaky old voice…he's doing one of my songs called 'Things We Said Today,'" Sir Paul pointed out in the interview, before proceeding to imitate Bob's rendition.  Macca added, "I think I was saying…'If I started singing like that they'd shoot me.'  Bob's great, you know.  I love it…It's just, you're either a fan or you're not, and I'm a big fan of his."

Paul also said his next project is music for "High in the Clouds," an animated feature based on his 2005 children's book. He'll also voice one of the characters i the film.

New and upcoming Beatles books: Beatles and the Avant-Garde, Julia

Spotted a couple of new ones on Amazon.

The Beatles & The Avant-Garde


The only book of its kind, The Beatles & The Avant-Garde tells the story of the Fab Four's more aesthetically challenging material.

With his trademark blend of intellectual rigor with accessibility, Beatles scholar Aaron Krerowicz explains the innovative thinking behind some of the band's most infamous projects (including 'Carnival of Light' and 'Revolution 9') and illustrates how those artistic productions reflect the lives of their creators. Beatles lore assumes that Yoko Ono's sway over John Lennon was solely responsible for the band's avant-garde experiments.

The whole story, however, is much more interesting and complex. This book explores not only how and why Yoko influenced John, but also the many other avenues through which the Beatles found the avant-garde, channeling those influences to create innovative, world-changing music.

In these pages, fans and scholars alike will find valuable insights and a new way of thinking about the Beatles' extraordinary accomplishments.

Julia - The Story Of Julia Lennon


The author Kevin Roach has always been supported during his research by families of the subject. This book is no exception and has been supported by Julia Baird, John Lennon's half sister.

"Mother you had me - I never had you?" These word where the inspiration for this book, these words written by John Lennon in his deeply personal song "Mother." The song wasn't so much sung, but screamed out for its recording on the John Lennon/Plastic Ono Band album, this was in complete contrast to the early song Lennon had written for his Mother on The Beatles White Album titled "Julia."

Listening to the two songs you wonder who was Julia, who was Mother? Who was that person? It is hard to portray the lives of others people to everyone's satisfaction, and the life of Julia has been portrayed by so many without research, and taken the quotes from John's Aunt Mimi. However this excellent book takes you the reader into the life of Julia, starting in 1906 with the marriage of her parents to her untimely death in 1958.

Why was Julia the person she was? Was she just a good time girl who enjoyed being in the company of men because of the attention they gave her, or did she equally have deep, unstable issues that caused her to act out quite wildly? This book is the first book to feature Julia as a central character, and is supported with new (never before) published documentation and photographs from the family collection.

Hadn't seen this one before. 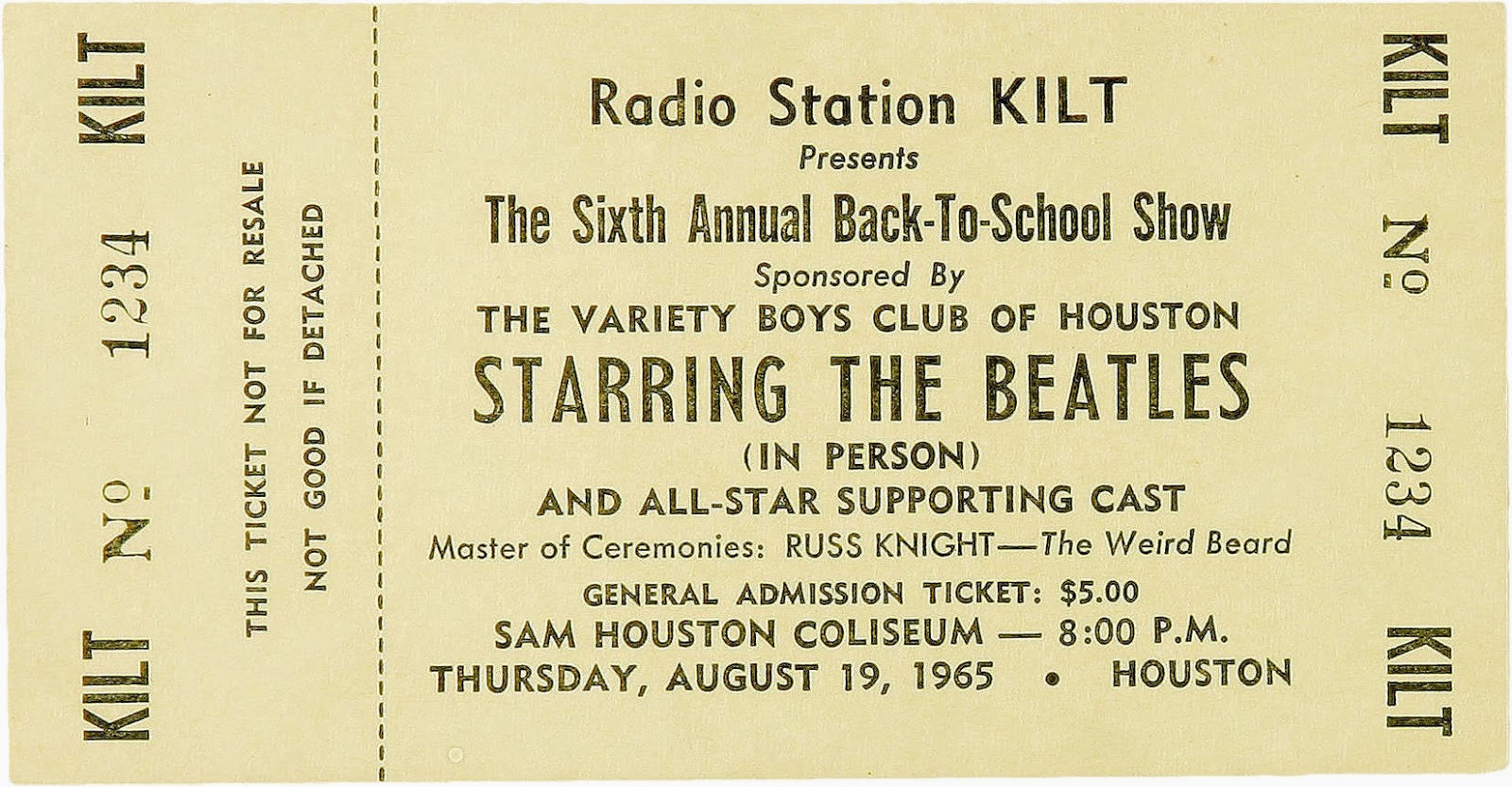 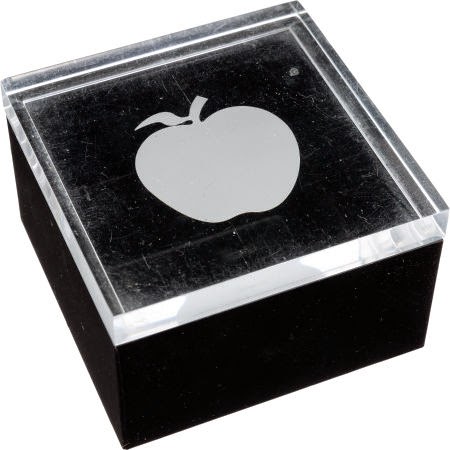 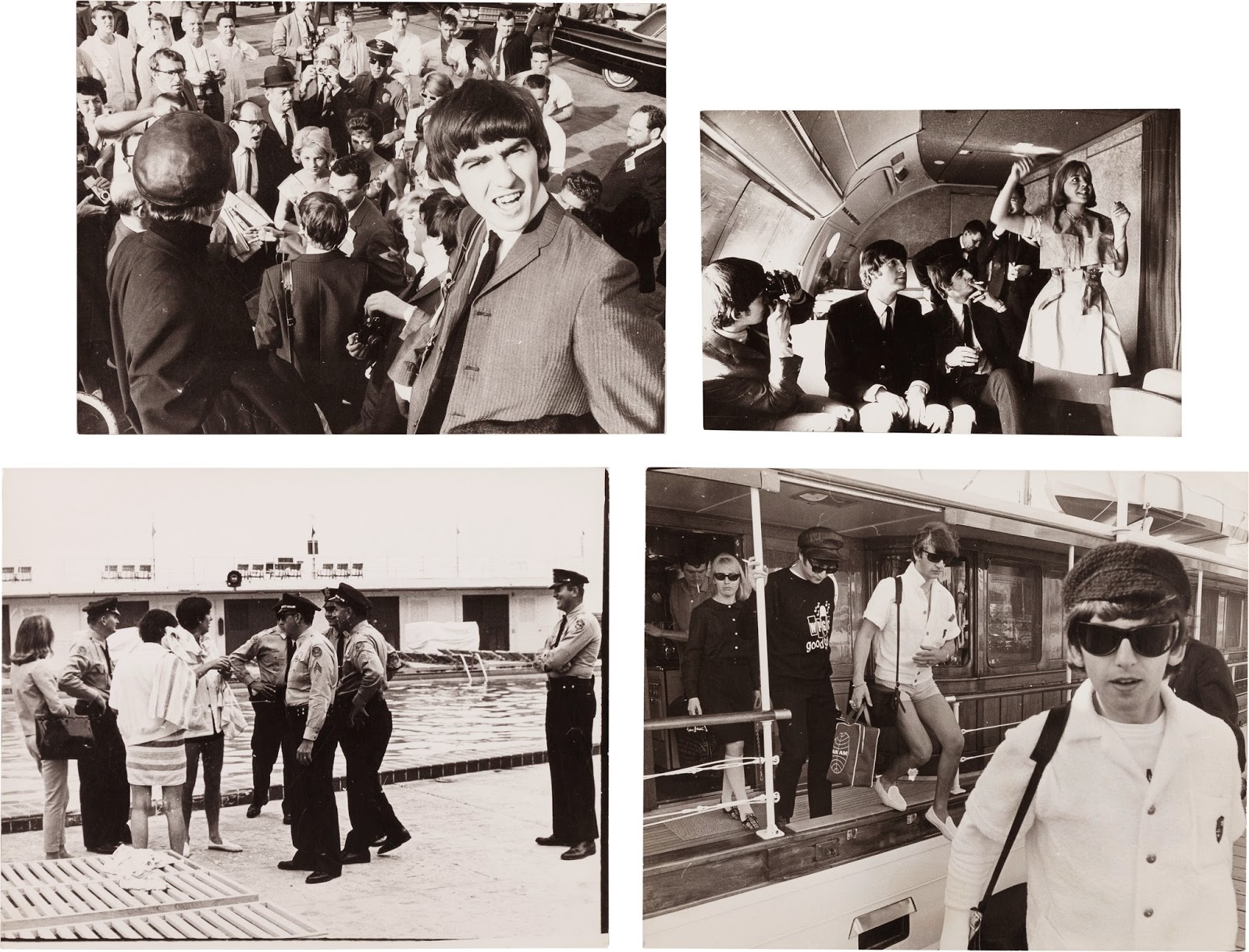 Email ThisBlogThis!Share to TwitterShare to FacebookShare to Pinterest
Labels: Photographs

Email ThisBlogThis!Share to TwitterShare to FacebookShare to Pinterest
Labels: Memorabilia 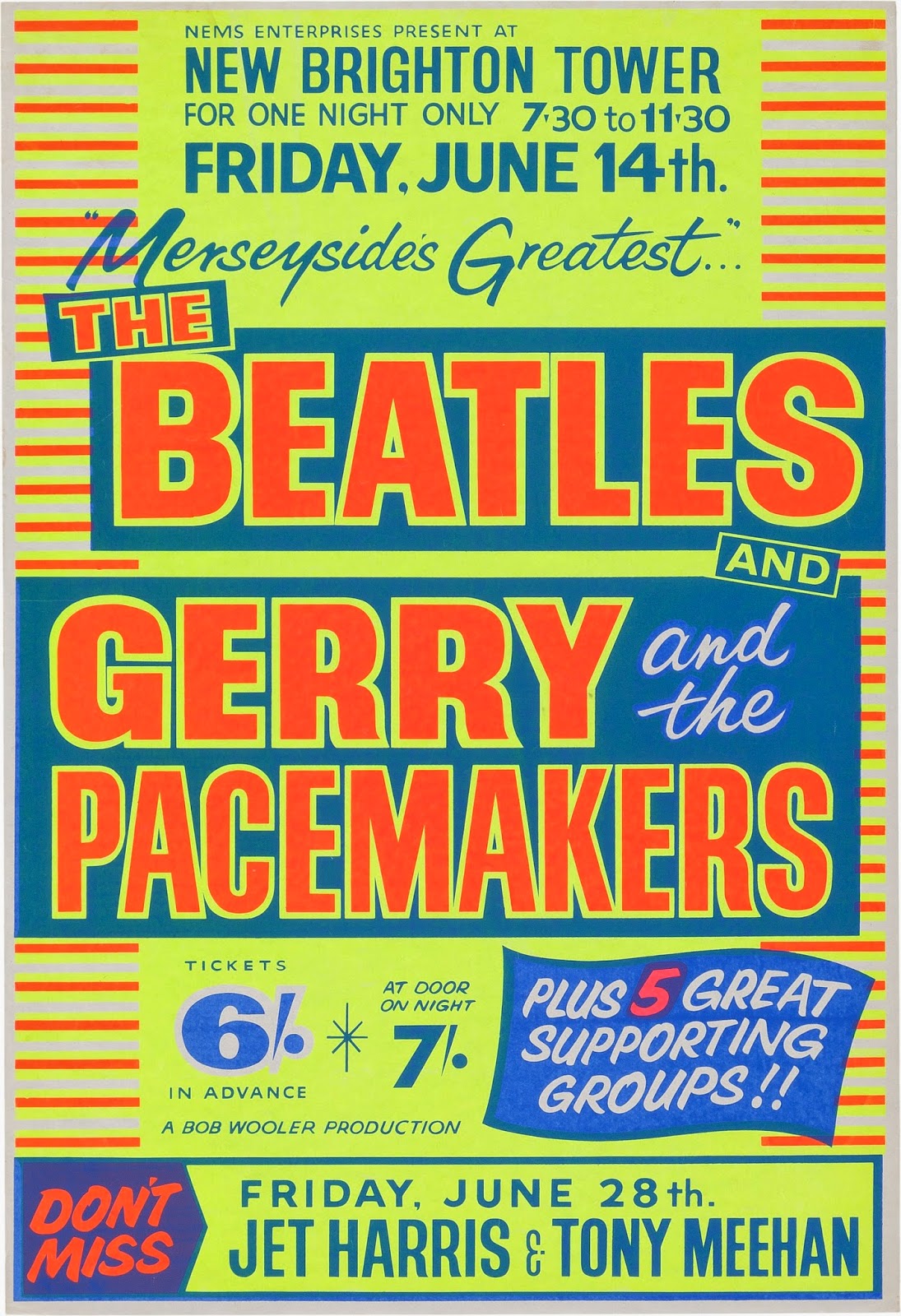 
B&W photo of Paul and John standing in front of bookshelves. According to the original Dick Clark auction catalog, this photo was on display in his personal office, and the image would likely date to 1968 based on the duo's appearance. 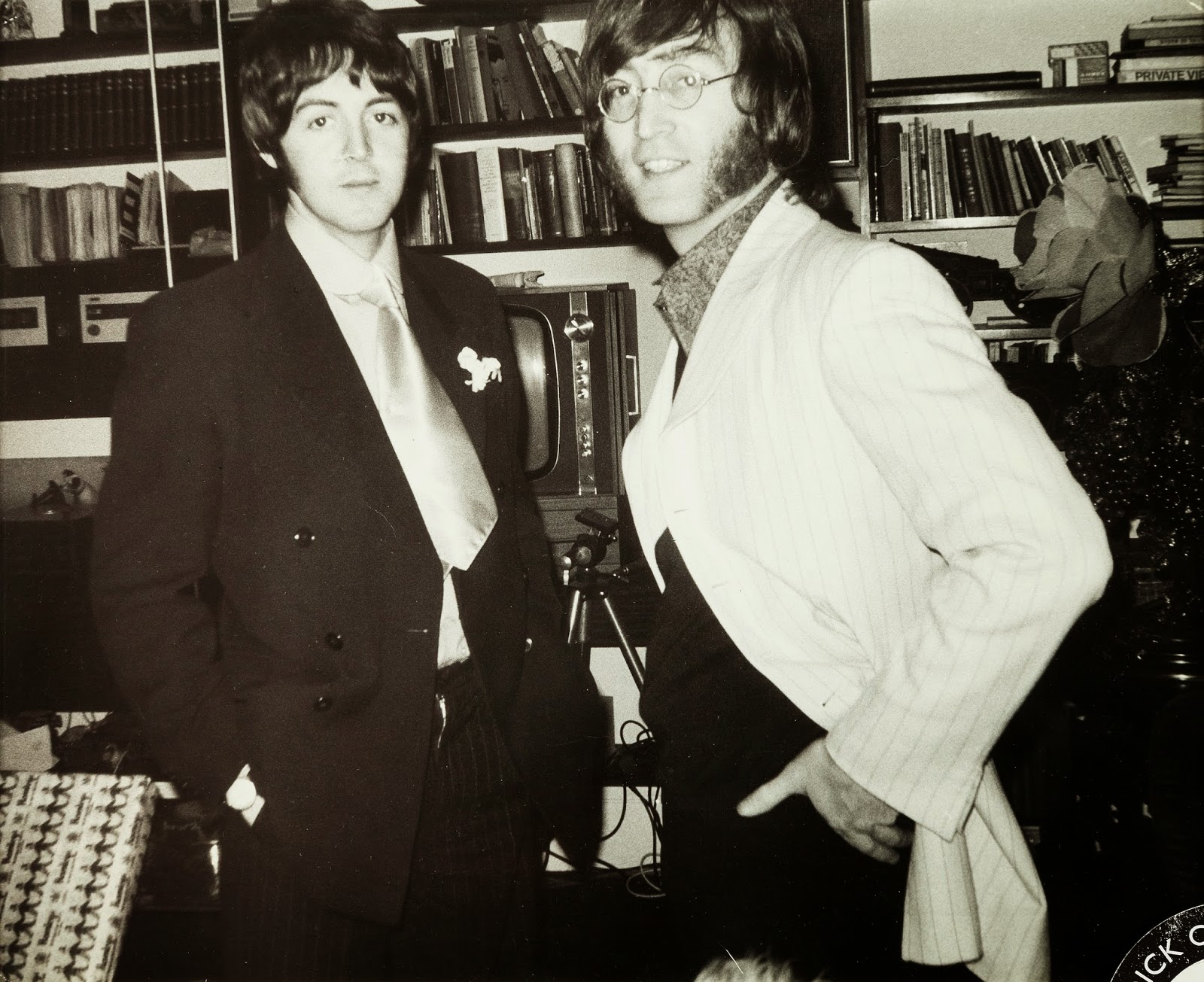 
Capitol spent little time picking out the preferred color scheme for the tame "Trunk Cover" design, as the company hastily replaced the troublesome "Butcher Cover", the original cover for the album. Here's an attractive alternative cover, more colorful than the final choice. 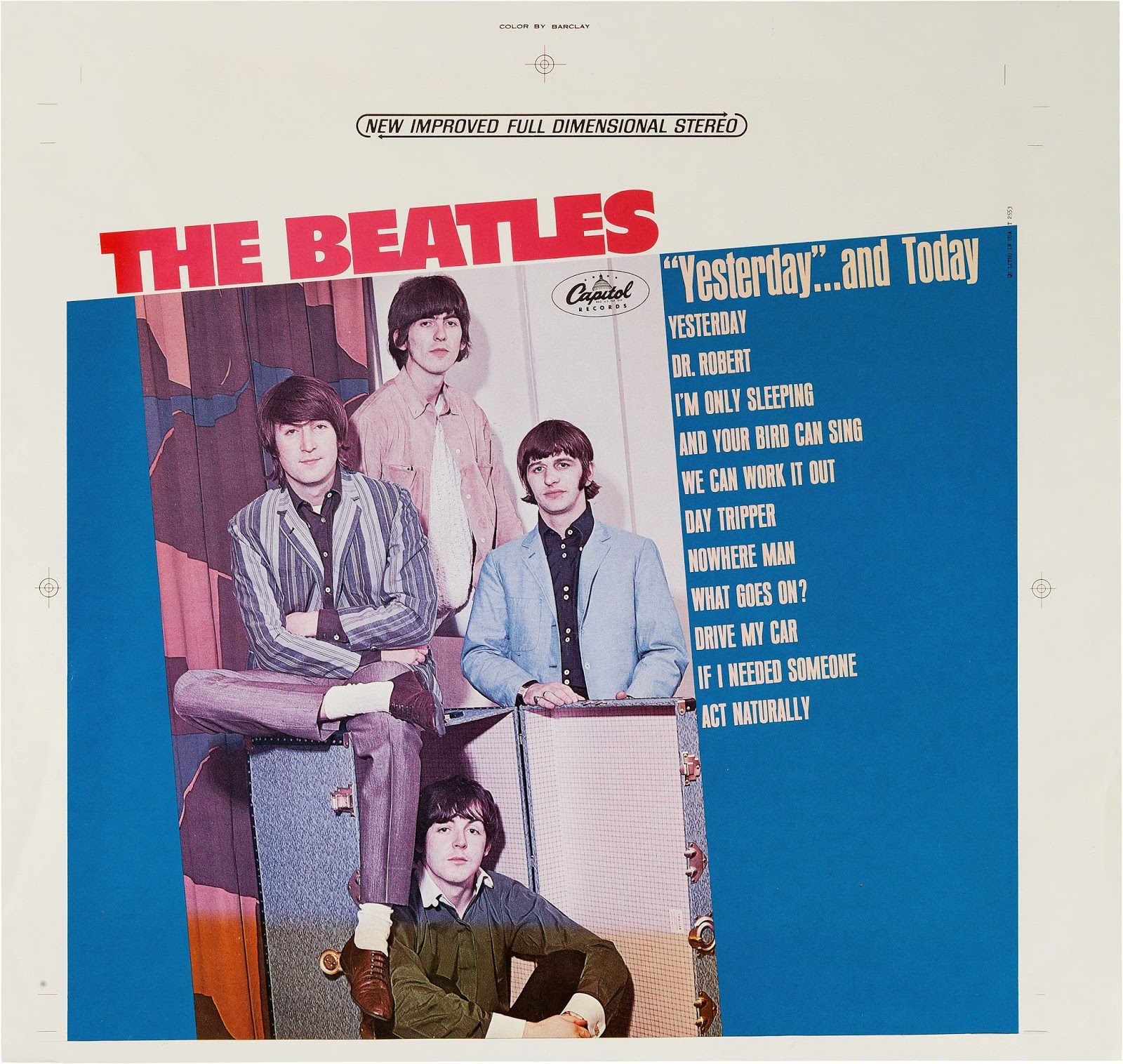 
This is the second audio documentary to be released on LP by Ed Rudy, the New York newsman who famously accompanied the Beatles on their entire February 1964 American visit. Rudy conducted numerous recorded interviews with the Fabs which resulted in an hour-long syndicated radio program which proved so popular with listeners that it was released commercially in 1964 - and even made the Billboard charts! After the Beatles' Summer 1964 American tour, a second radio tour documentary was produced and, again, released commercially (in late 1964, although dated 1965 so as to not confuse it with the first LP). 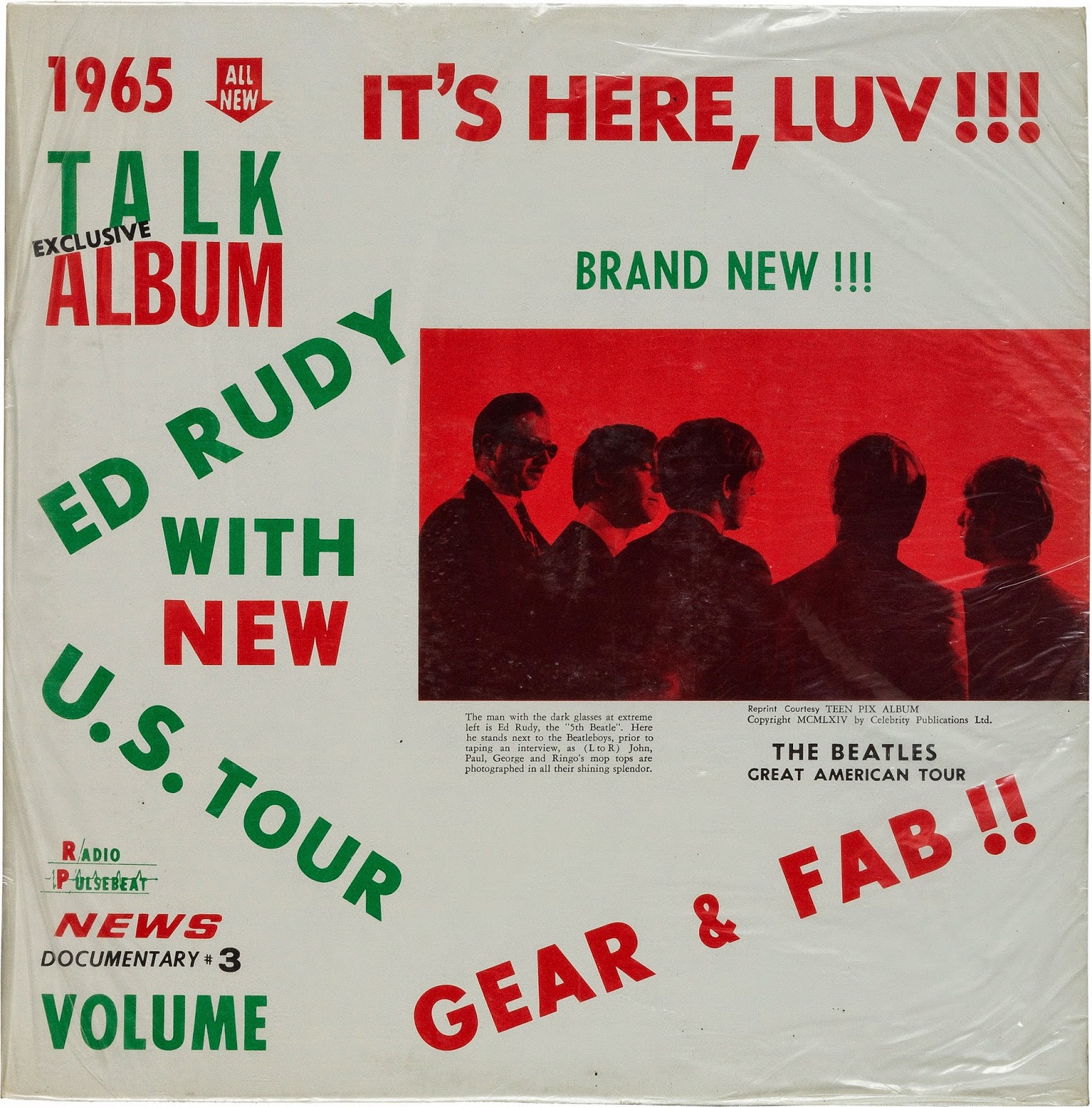 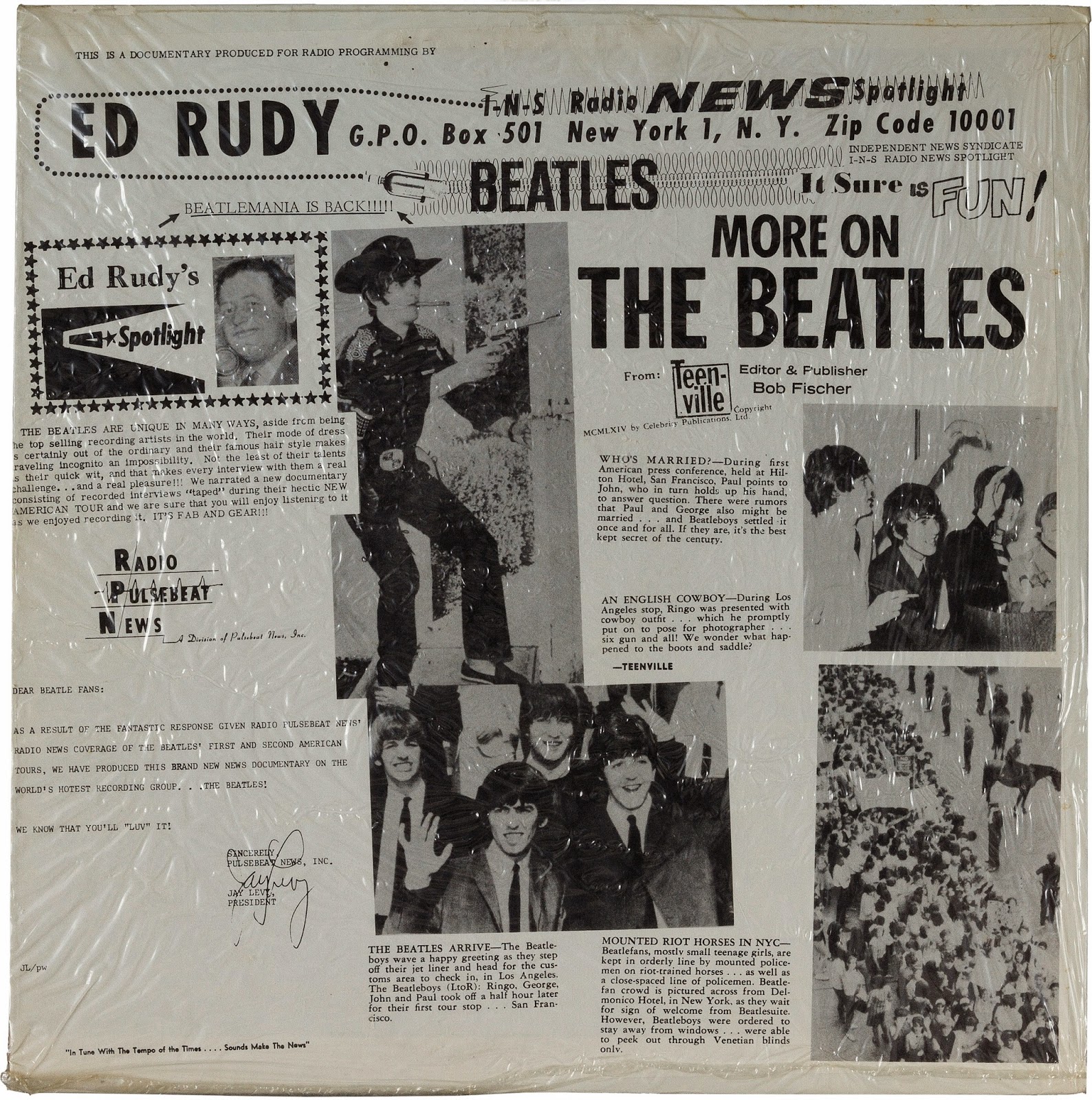 
This is the first time we've seen a copy of this specially-made for radio promotion of the Fab's first Capitol release. The 7" disc featured a few minutes of interviews, plus three songs from the album, "I Want To Hold Your Hand, This Boy, and It Won't Be Long."

Up for big at Heritage Auctions.

An Evening With The Beatles is the title on this 6" x 10" four page program. On September 20, 1964, the Beatles waived their fees and played this concert benefiting United Cerebral Palsy of New York City, Inc. and Retarded Infants Services, Inc. Ed Sullivan, Steve Lawrence, and Eydie Gorme were the hosts. Tickets sold for as much as $100 but there were only 3682 seats in the theatre. It was a sellout, of course, and there are reports of 100,000 fans outside with 200 of New York's finest keeping them under control. This was the last concert date of their first full American tour. Programs are rare. Flattened folds and light uneven toning, overall Very Good. 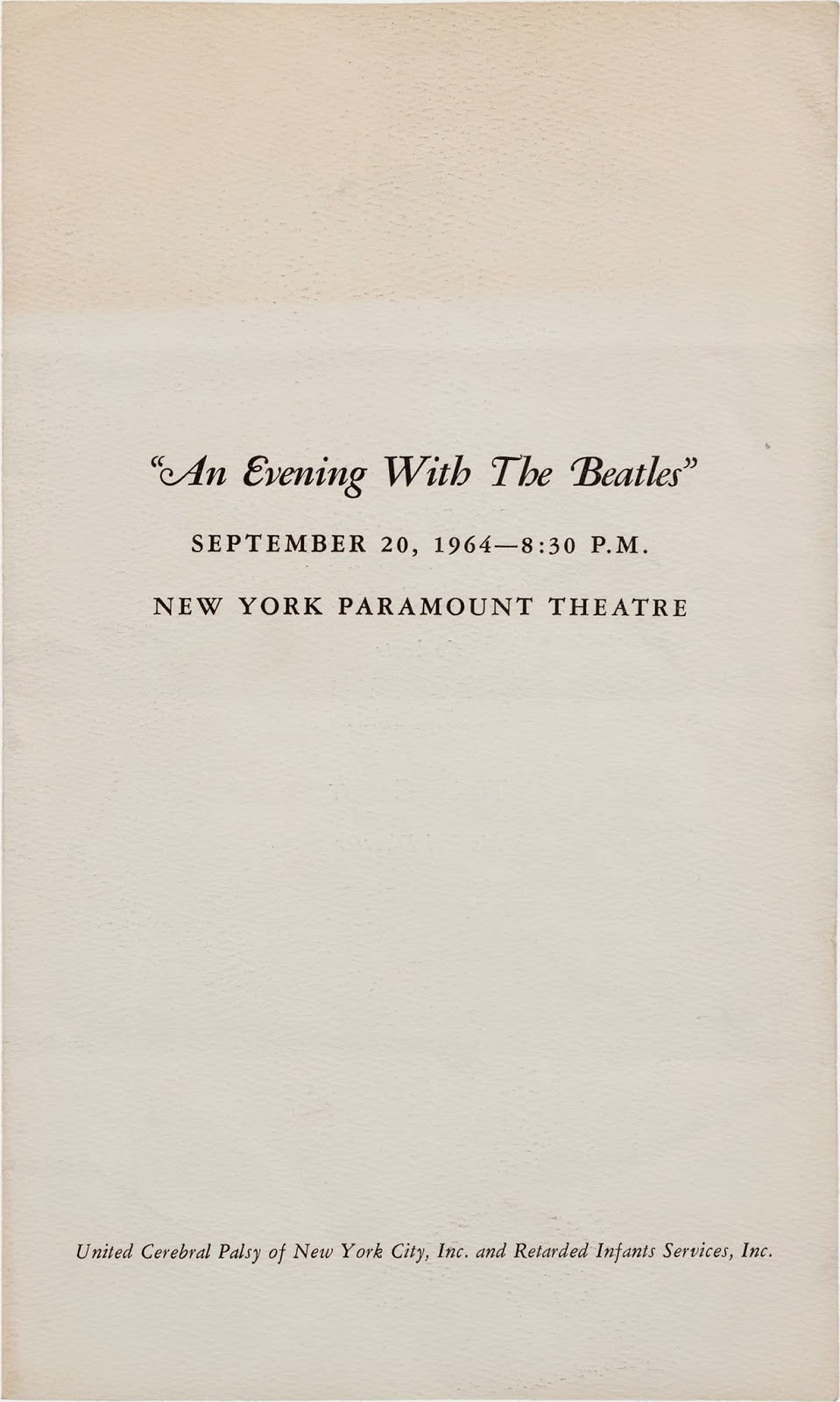 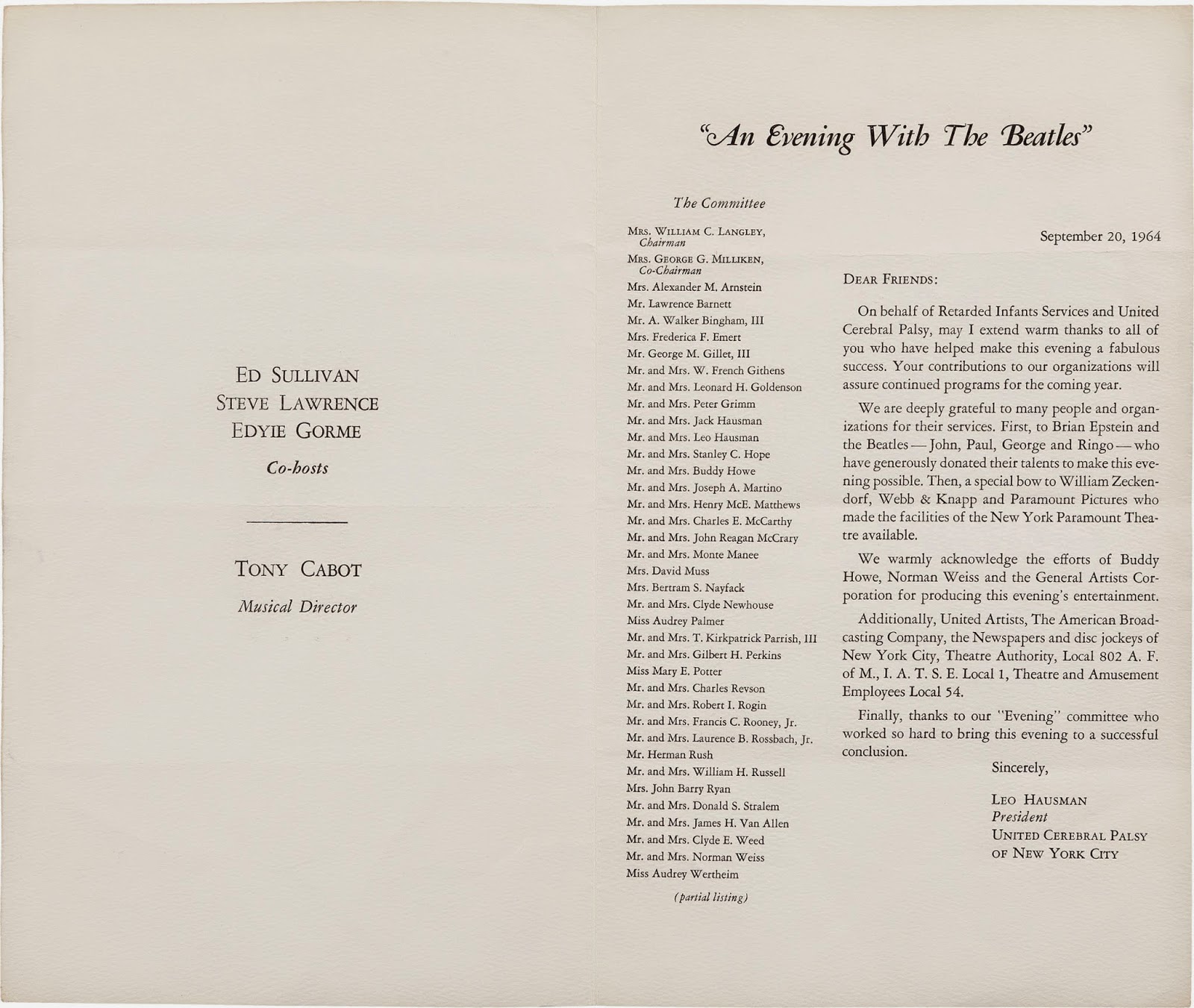 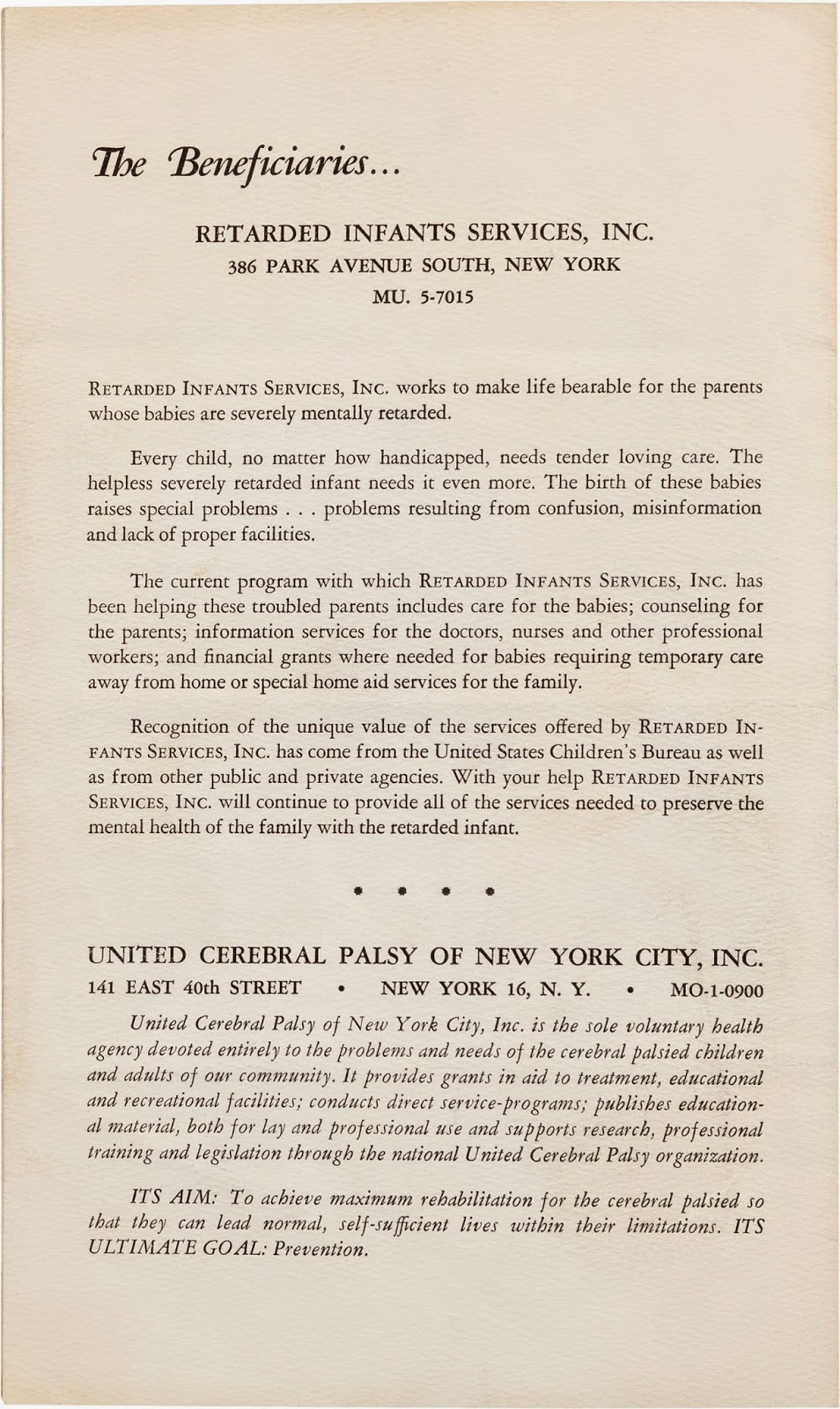 The Beatles were perhaps the most-photographed entertainers of all time, and Astrid Kirchherr is perhaps the photographer whose name is most associated with the group. Having met them shortly after their arrival in Hamburg in August 1960, Kirchherr was instantly attracted to both their magnetic personalities and brash early Rock 'n Roll look - this was still the Beatles of black leather and greased-back Elvis quiffs. Her stark black & white photo of the five piece band - John, Paul, George, along original drummer Pete Best and bassist Stuart Sutcliffe - taken on the grounds of the Hamburg Fun Fair is perhaps second only to Iain Macmillan's Abbey Road cover in the pantheon of iconic Beatles images. It was through Klaus Voorman that Kirchherr was introduced to the band at the Indra Club in Hamburg's Reeperbahn district, and she and Voorman remain important figures in the fascinating story of the Beatles to this day.

Two and a half years after that introduction, the Beatles were in a very different place, both literally and figuratively. Stuart Sutcliffe had left the group and subsequently died, Ringo had replaced Pete Best, and Brian Epstein had become their manager - in doing so moving them out of black leather and into smart suits, and securing them the recording contract which they'd always dreamed of. "Please Please Me", their second single, had gone to number one at the end of February, 1963. Capitalizing on their growing success, they'd been on a breakneck schedule of touring, making television and radio appearances, and recording their first LP - seemingly working eight days a week for months. So when their schedule cleared at the end of April, the Beatles took 12 days off for holidays in the sun: Brian and John went to Spain, and Paul, George and Ringo - in the company of Astrid and Klaus, whom they'd remained friendly with - went to the island of Tenerife, staying at the Voorman family home there. These rarely seen photos from Tenerife show the three Beatles and Astrid relaxing by a swimming pool near the ocean, free from the pressures of Beatlemania that had recently been unleashed at home. Taken with Astrid's portable Rolleicord camera in glorious color, the candid images preserve an amazing moment in time in the Beatles story - one that they may not be aware of themselves - as it may be one of the last times they were free to be in public and not be recognized. The first taste of fame has been experienced, and there will be no going back, ever.

This rare portfolio entitled "Teneriffa '63," dates to 1985 - the first and only time that the color Tenerife photos were produced in a professional edition from the original negatives by Astrid Kirchherr. Originally envisioned as an edition of 100, only 15 portfolios were produced, and only a few - including this one - were sold as complete, unbroken sets. Each of the eleven included prints is approximately 11.5" x 8", with the color images measuring approximately 7.75" x 7.75". Each print is signed by Kirchherr and numbered 11/100, and also included is a signed, dated, and sealed certificate from the photographer. 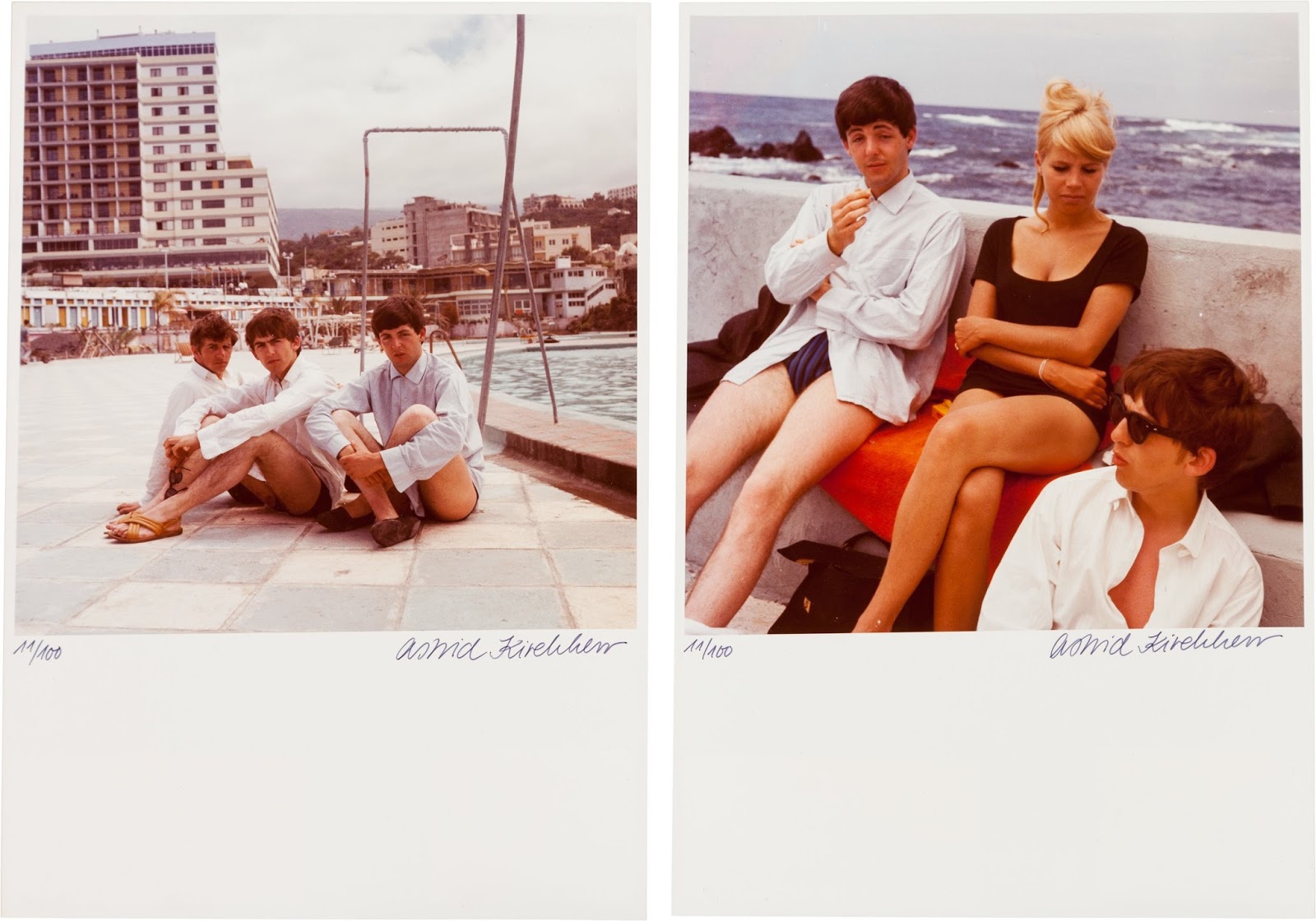 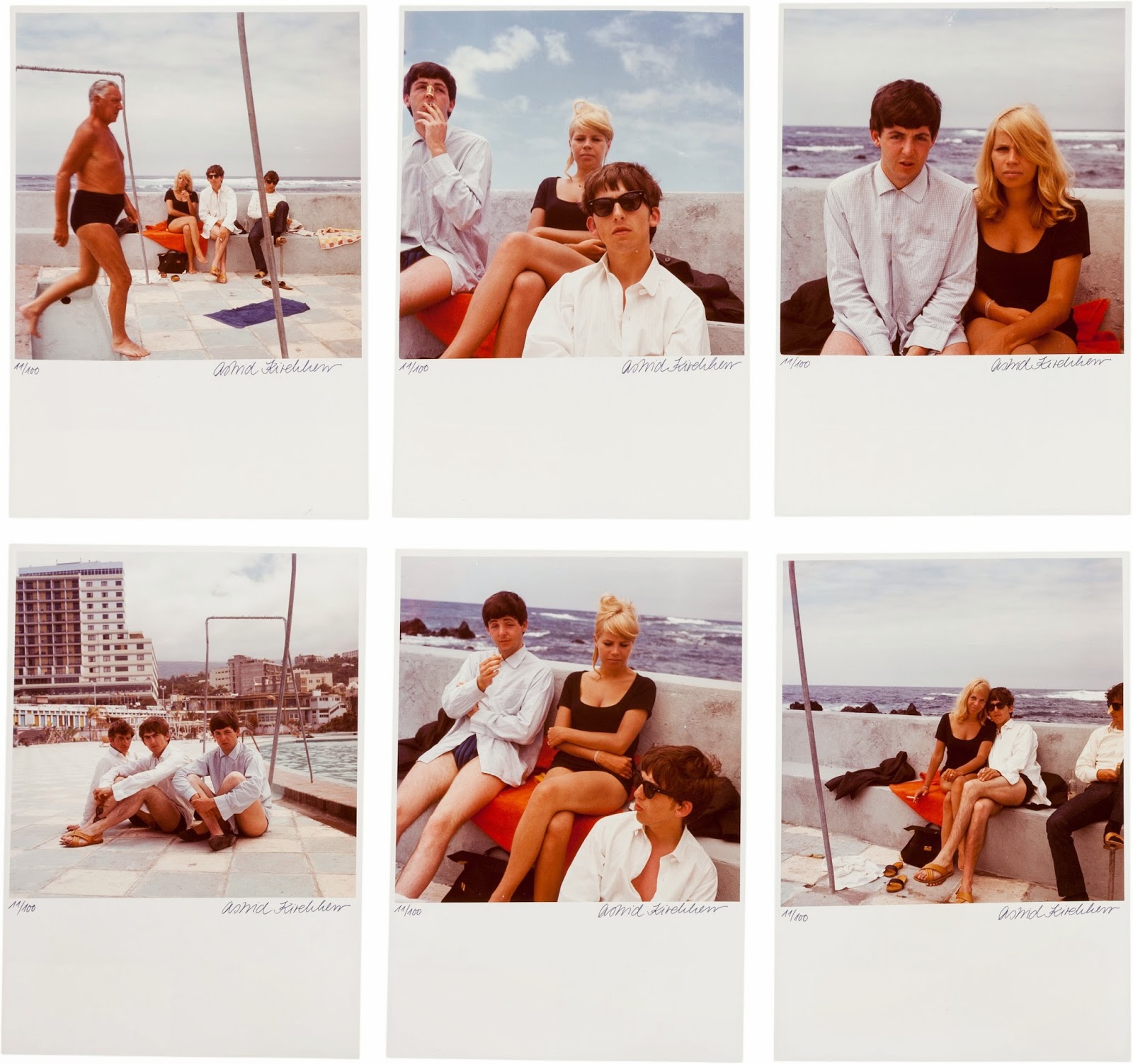 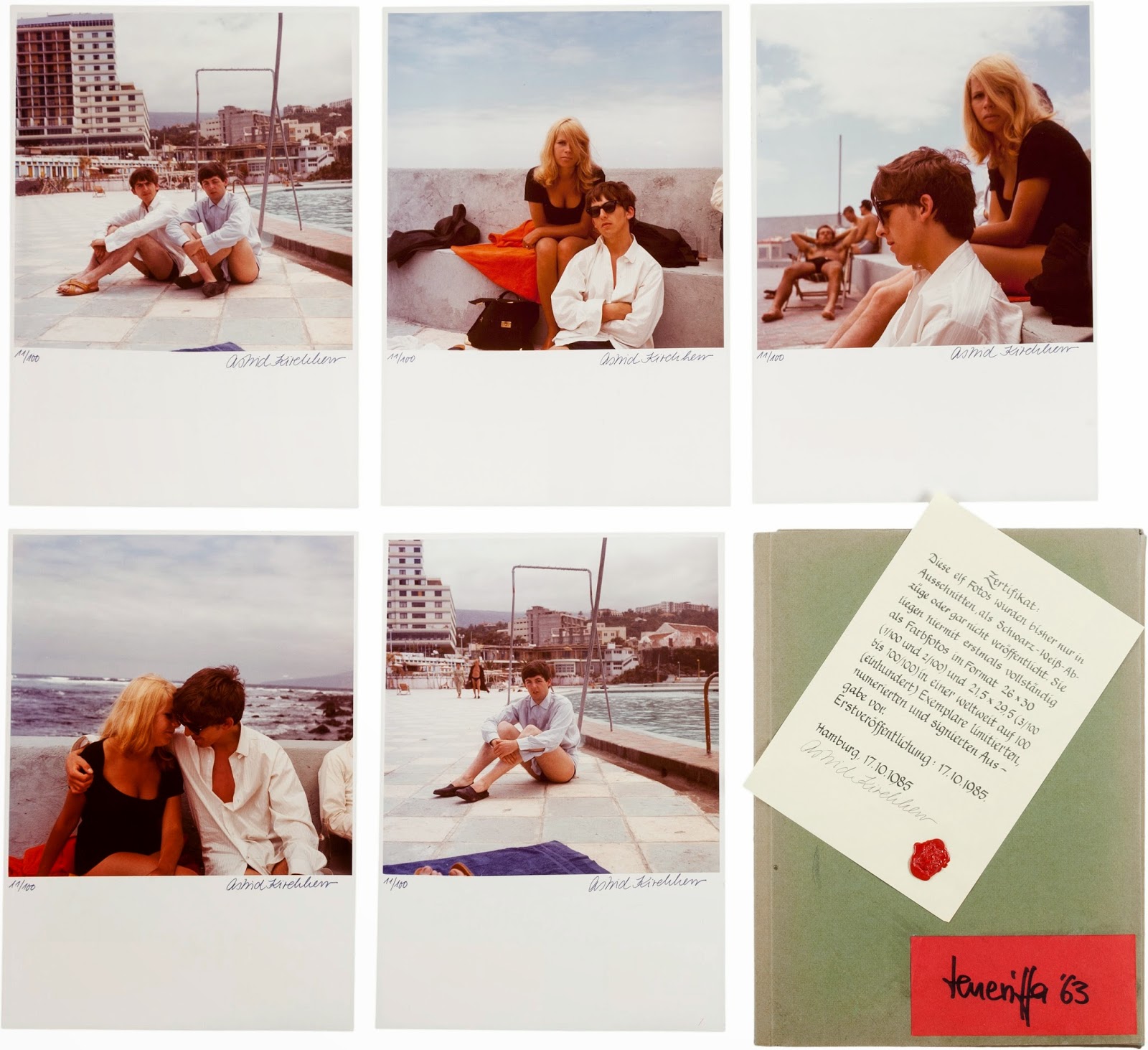 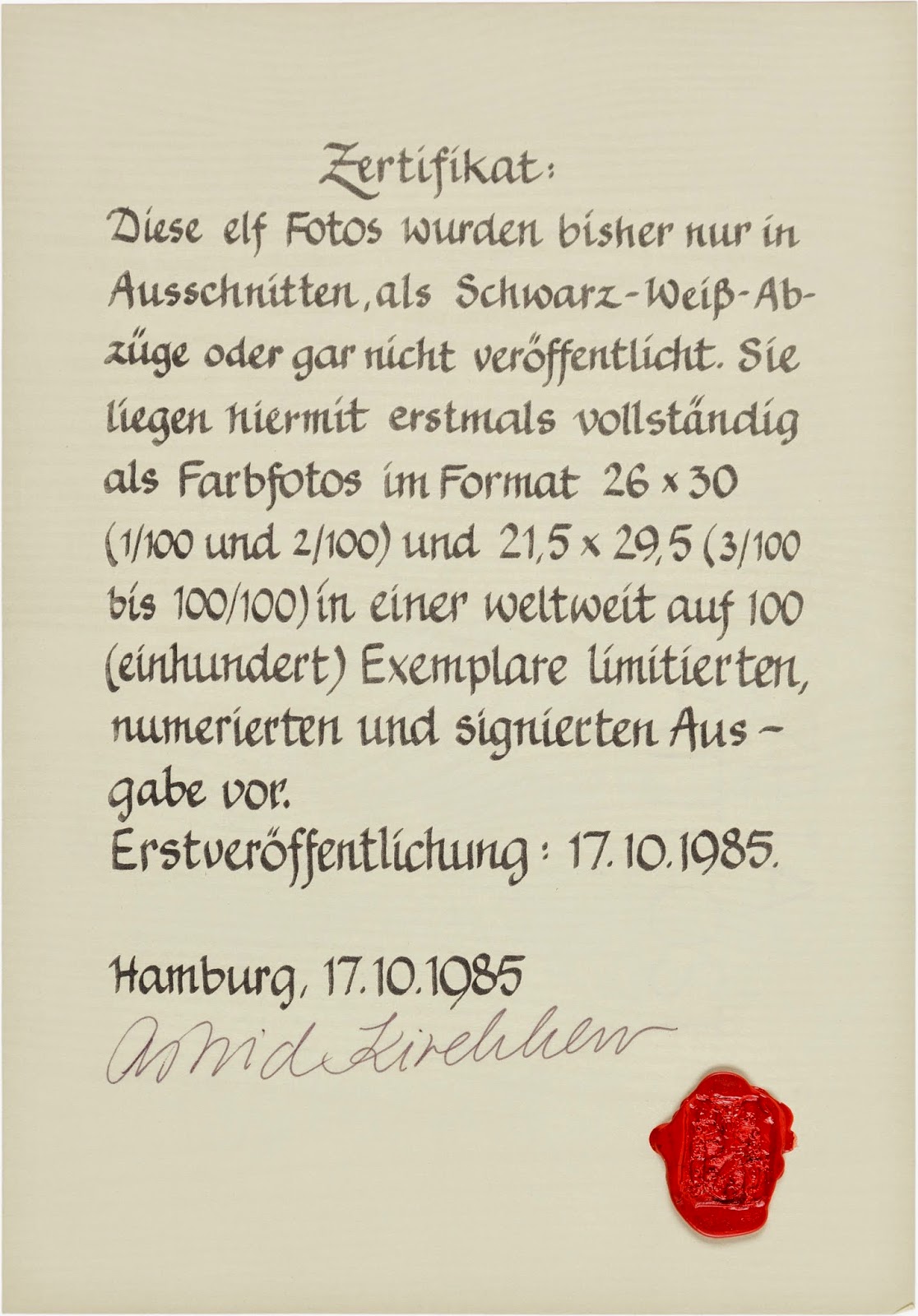 
On August 22 1968 this press package was released promoting Apple artists of the day, including these 45s: the Beatles' "Hey Jude/ Revolution" (Apple 2276, 1968); Mary Hopkin's "Those Were The Days/ Turn, Turn, Turn" (Apple 1801, 1958); and John Foster & Sons LTD. Black Dyke Mills Band's "Thingumybob/ Yellow Submarine" (Apple 1800, 1968). Each record is matched with an 8" x 10" booklet about the artist and with an informational letter from Apple executive Derek Taylor. The pack comes with the original white Apple mailing folder, an extremely rare item that just doesn't turn up. You want more unique? The 45s come with the original Apple dropped thumb tab sleeves, which were only issued with this set. 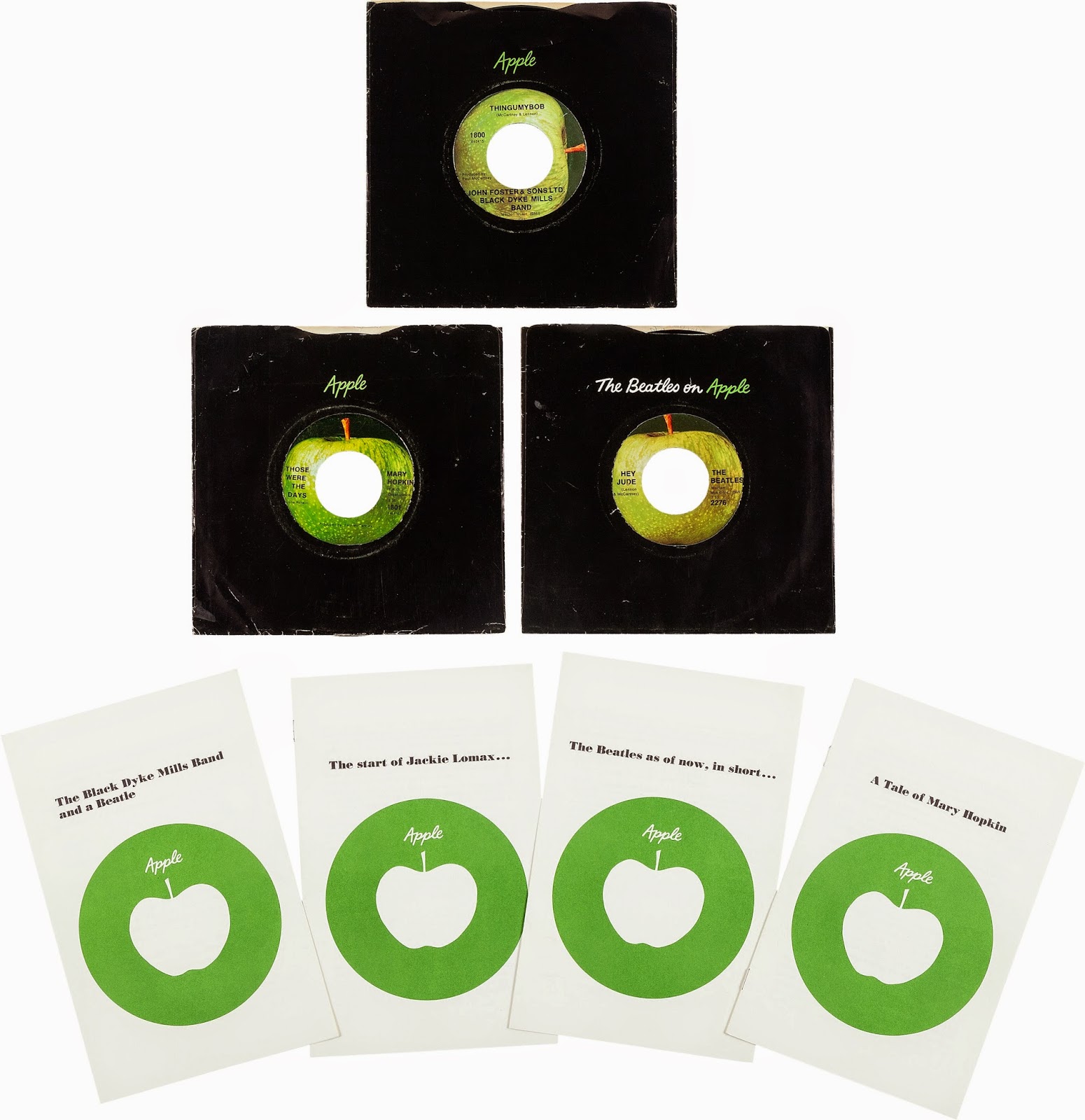 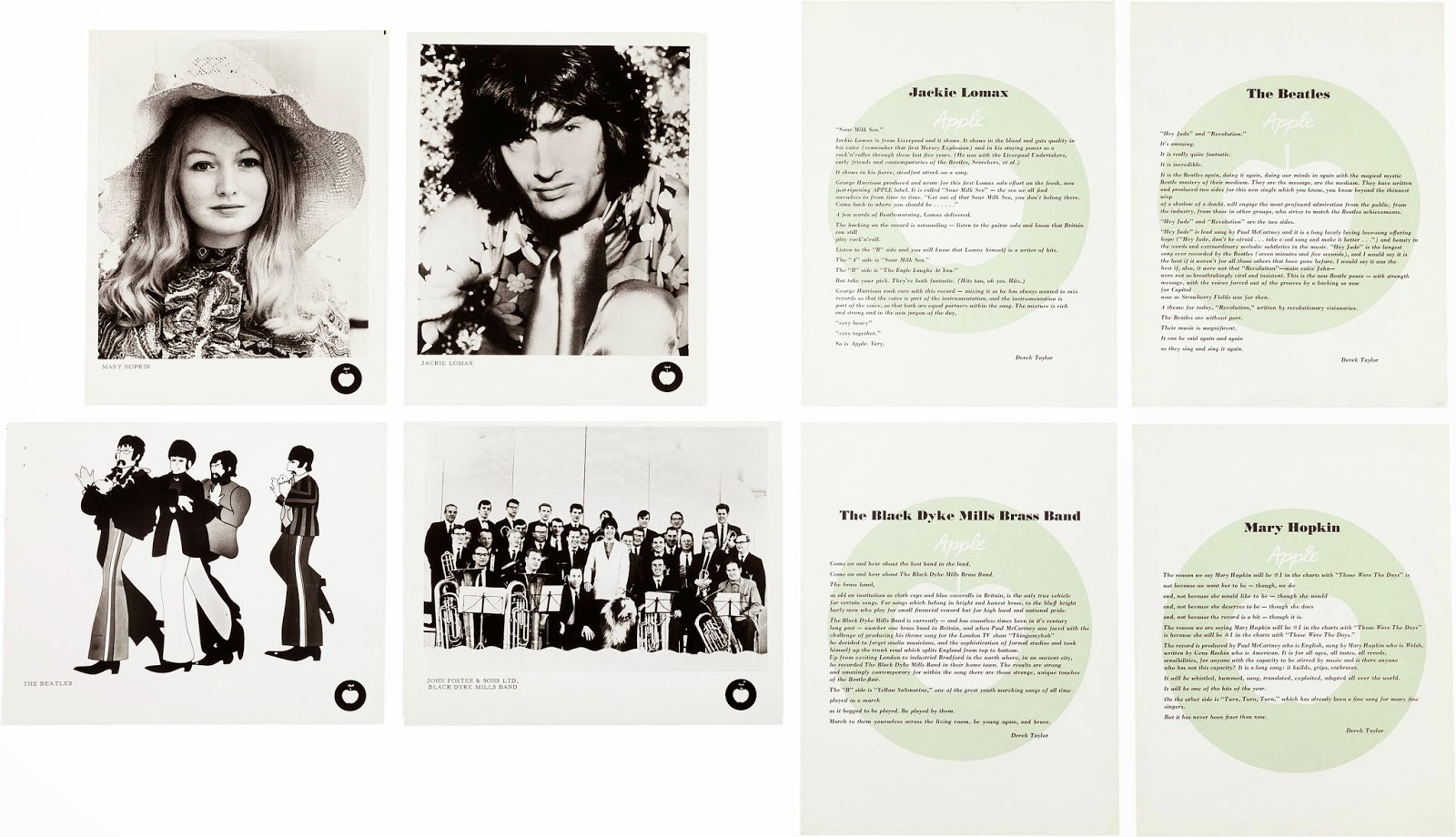 
This extraordinary collection of legal documents and news clippings documents the personal and legal involvement of Ted "Kingsize" Taylor in the recording and subsequent commercial release of a live Beatles performance from 1962. Taylor was the leader of the Liverpool group Kingsize Taylor and the Dominoes, who in the early 1960s played on the same circuit of clubs in both Liverpool and Hamburg as the Beatles. During the Beatles' final visit to Hamburg in December 1962, Taylor captured one of their marathon sets on a portable reel-to-reel tape recorder. A decade later, he and the Beatles original manager Allan Williams began exploring options for the tape, which led to the 1977 release of the LIVE! at the Star-Club recording on Lingasong Records. The Beatles had sought to prevent the release, but at the time could not. Over the years various other legal actions were taken, and in the late 1990s it was ruled that the Beatles were the worldwide owners of the recordings, and they've been effectively off the market since then.

Among the documents here, many reproduced as photocopies: a 1973 receipt on Apple stationery (original) noting the delivery by Taylor of the Hamburg tape for forwarding to George Harrison; the 1975 agreement between Williams, Taylor, and Lingasong Records to release Star-Club; an undated and optimistic (original) handwritten note from Williams to Taylor stating "Dear Ted, Its looking very good Eh! I've booked a world trip out of the UK for one year Allan"; numerous newspaper clippings from the late 70s reporting on the Beatles efforts to stop the release; transcripts of lengthy depositions given by George Harrison and Paul McCartney in 1992 in an effort by Apple Corps to prevent Sony Music Entertainment's release of the performance; and late 1990s transcripts and high court judgements in the case of Harrison and Others v. Lingasong Music Limited.

The lot consists of several hundreds of pages, presented over dozens of individual documents. In mostly Very Good condition. Includes a CD copy and two cassette copies of the Lingasong release, and other ephemera. 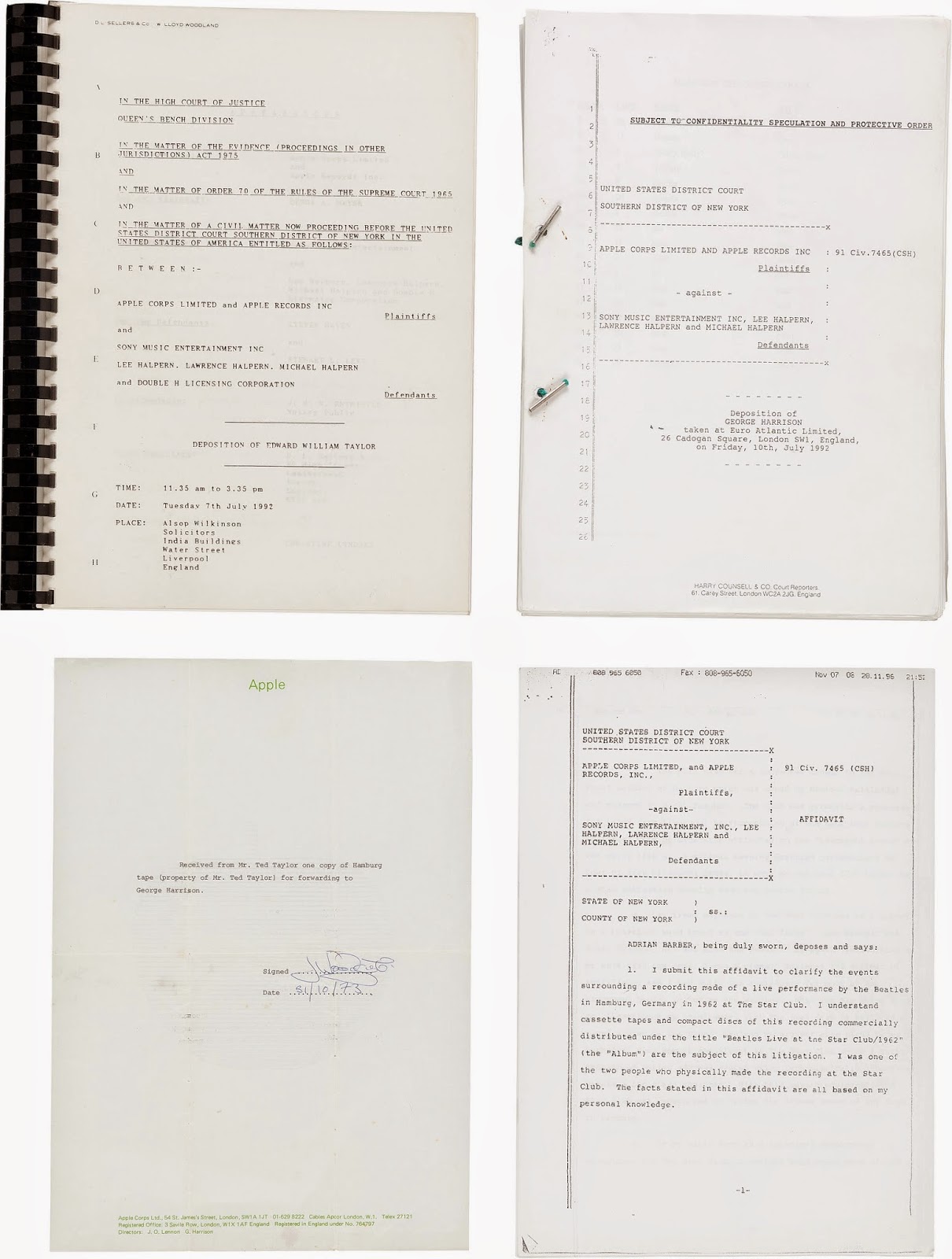 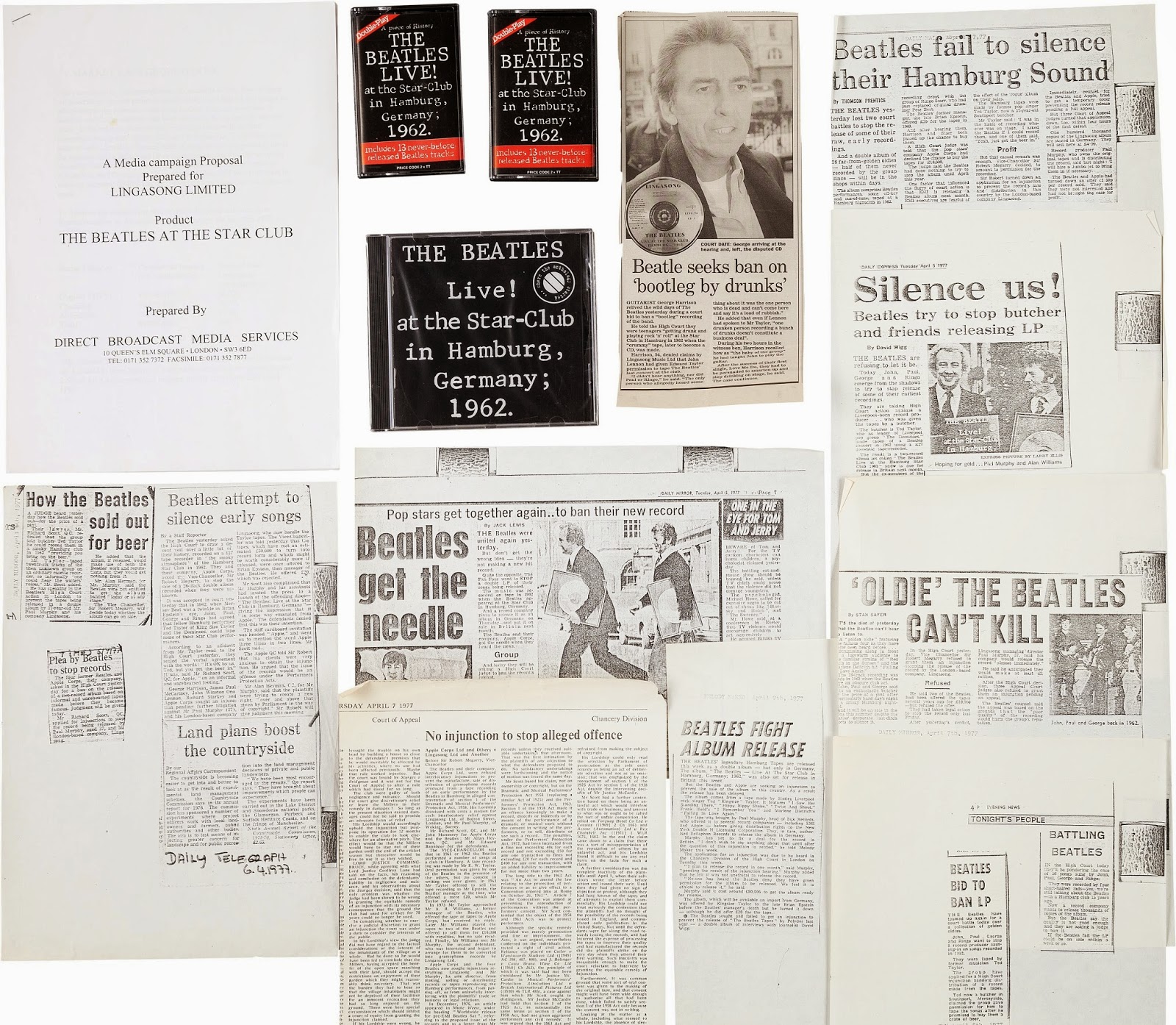 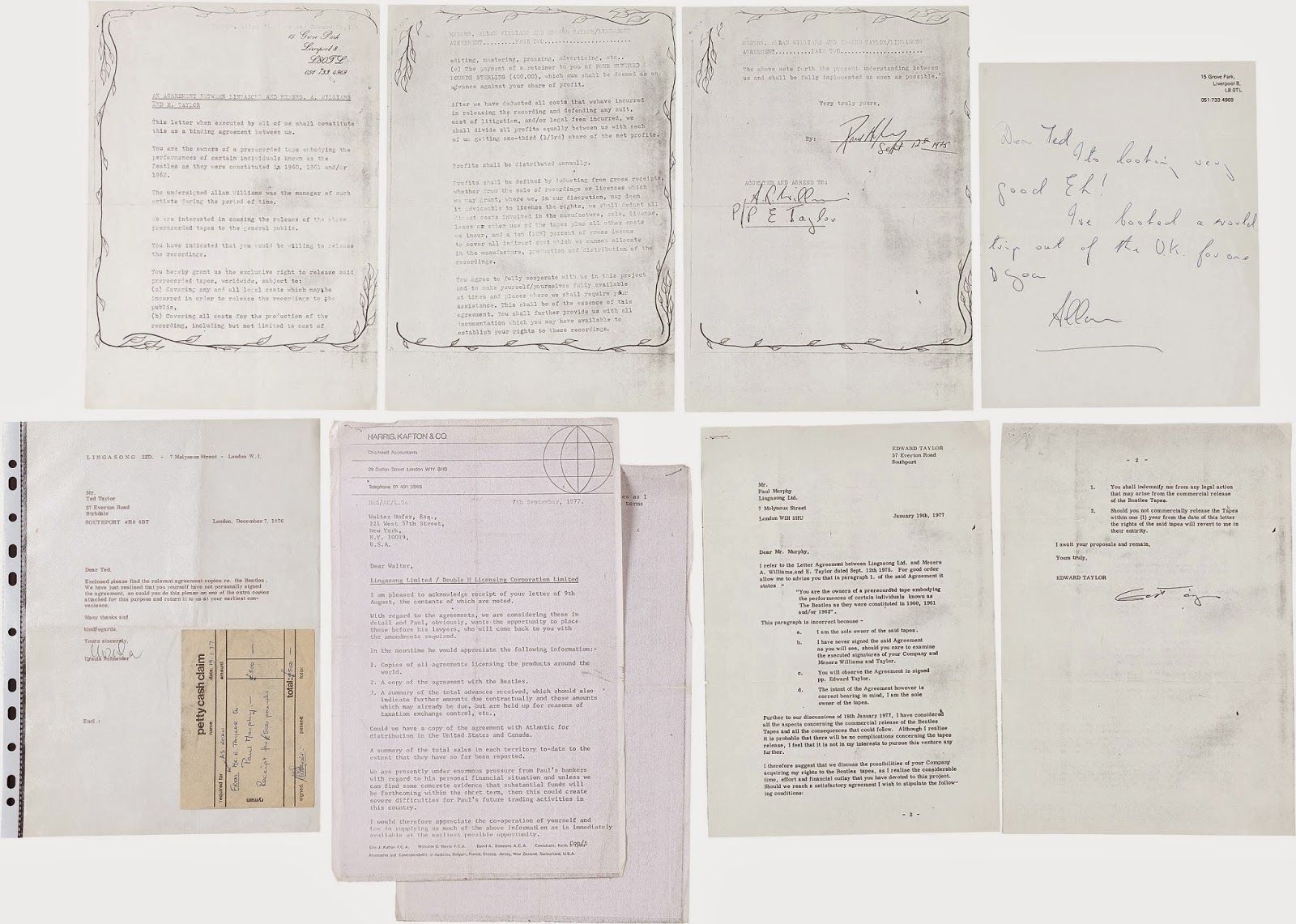 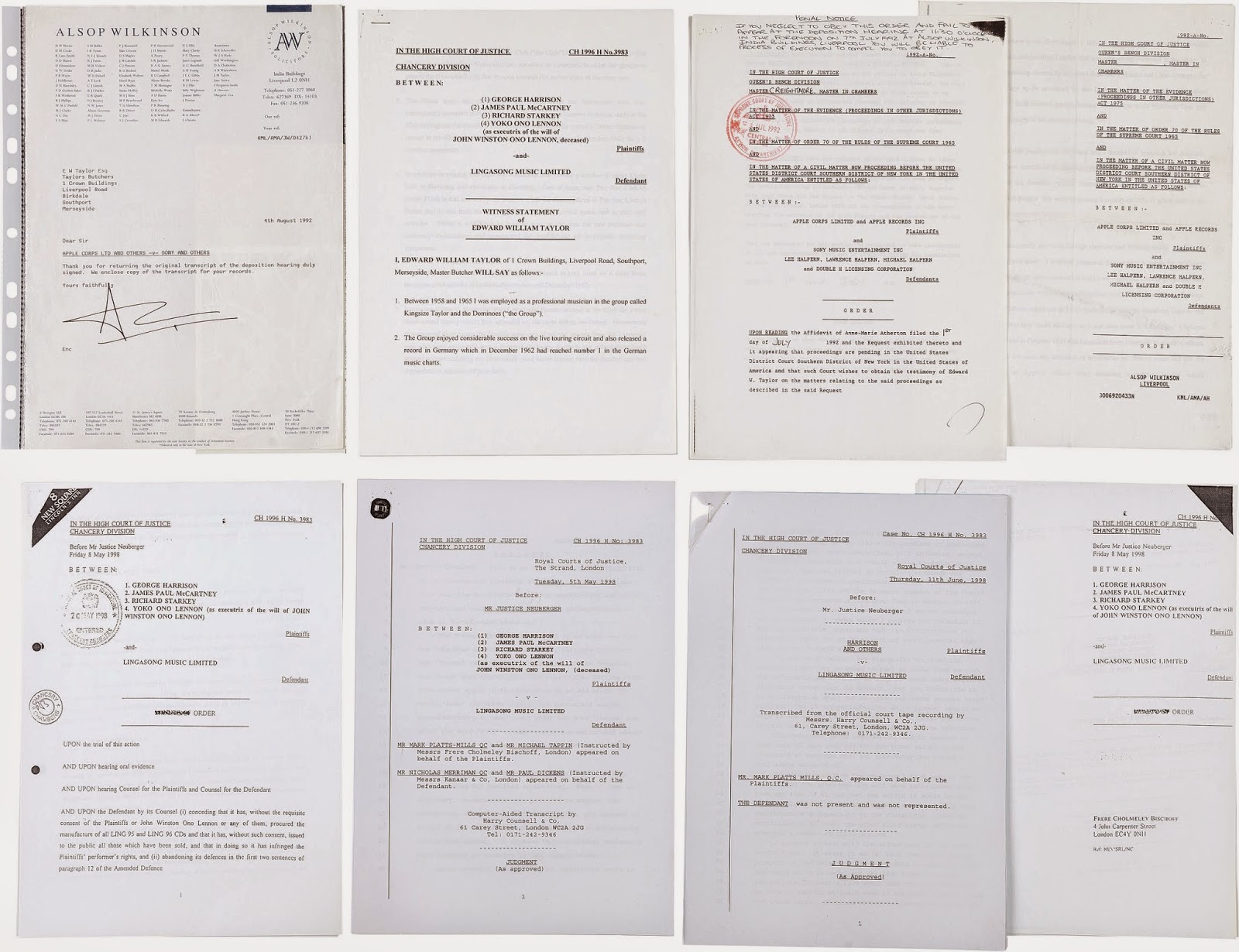