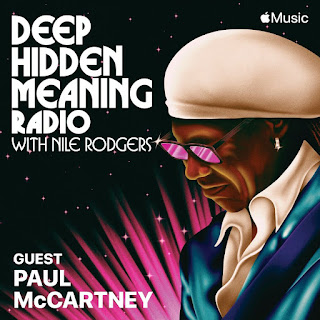 You can hear excerpts of Paul's conversation with Chic's Nile Rodgers now on the American Songwriter site. The complete interview is available free on Apple Music this Saturday,  Jan. 9, at 8 a.m.LA / 11 a.m. NY / 4 p.m. London time at https://music.apple.com/us/curator/1481637462

McCartney: Do you want me to tell you about “Jet?”

McCartney: “I was up in Scotland and it was a nice day, and I was on this little farm up there. So one day I just took my guitar out into the countryside and up this big mountain. And I find this beautiful little spot and I’m just making up a song. And what came to mind was we had a little pony for the kids, it was called Jet. A little black pony. So I thought, “OK, [sings] Jet!” and just shouted that and struck an A chord. “Jet!” So I got a little rhythm going.”

“Then I just started to think of this thing of when Linda and I had first got married, you know, I had her father to deal with. He was a great man, a lovely man, but he definitely was a father figure. He could be a little bit serious, a little bit restrictive, so this whole idea came into my mind, “Jet, your father was a Sergeant Major.” I started going off down that track of [sings] ‘Jet, I can almost remember the funny faces. That time you told him that you were going to be marrying soon.’ And I just made it up.”

“It’s largely fictional. Then it gets to the chorus, I go for some reason – and I really have no idea where this popped from –  I do this ‘Ah, mater.’ And ‘mater’ is Latin for ‘mother.’ I don’t know why I stuck that in. Maybe it’s just a word I liked. It just developed and by the time I came down off that mountain with my guitar I had the song finished.”

“So it’s this crazy little song. Really, if you break it down, it’s about a little black pony and some marital troubles and a Latin mother [laughs] jumbled all into one. Now there’s a case where people can make up their own mind as to what they think that means.”