A new working group is plotting how to make the most of Liverpool's huge Beatles tourism industry - without turning the place into Disneyland. 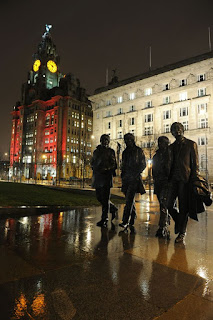 Yoko Ono says for the billionth time that she didn't break up the Beatles. A billion headlines ensue.

The Guardian, meanwhile, has a more detailed Yoko profile.


Even when she started writing more conventional songs, an intriguing idiosyncrasy showed through. Her contributions to 1980’s Double Fantasy are noticeably edgier and more in tune with the new wave era than anything Lennon came up with for the album: Walking On Thin Ice, the song they completed on the day he was murdered, was even more striking, a claustrophobic piece of experimental punk-funk with uncannily prescient lyrics about loss. “It’s so eerie, I mean, I thought of all that before John’s death, and I didn’t know he was going to die, and supposedly John didn’t either, so that happened in a very intricate and strange way.”

A performer in the Cirque Du Soleil's "Beatles Love" in Las Vegas was injured this week in a dress rehearsal of the freshly revamped show.

Ann Paladie, public relations director for Cirque Du Soleil, said a dress rehearsal for the show inside the Mirage hotel-casino on the Las Vegas Strip had to be stopped due to an injury to one of its artists.

The performer was in stable condition and transported to University Medical Center for treatment as part of Cirque's standard safety protocol, Paladie said.

The company did not elaborate on the nature or the cause of the artist's injury.

Allan Rouse, who acted as an archivist and reissue specialist for the Beatles' Apple Records, passed away earlier this week.

“I started off working on film scores at Abbey Road, but got the job of making safety copies of every Beatles tape,” Rouse said. “At that time they’d never been backed up. … Midway through that process, George Martin was making a program about the making of Sgt. Pepper and needed to go over the tapes again, and needed some help. So I did that, and at the end of the process he said I’ll probably be seeing you again, but he didn’t elaborate. He came back to do the Beatles at the BBC and I spent six months remastering that. And then this was followed by another stint where we worked together for a year on the Anthology series. By then, I was becoming the person people turned to when they needed some Beatles work done.”