The Beatles "Yellow Submarine" by cartoonist Bill Morrison is out Aug. 7. Pre-order it now from Amazon. 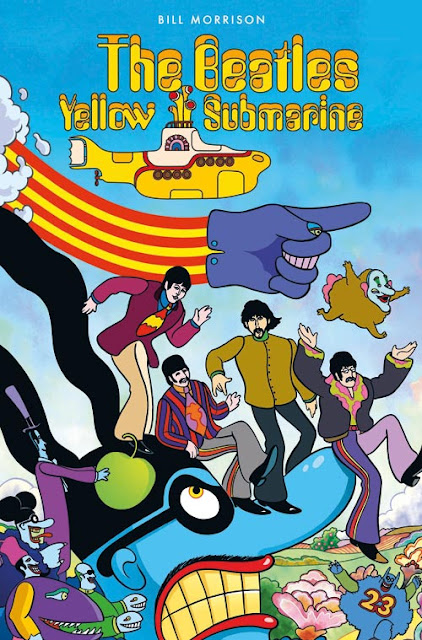 Cartoonist Bill Morrison, the new editor of Mad Magazine, started a graphic novel of the Beatles' "Yellow Submarine" back in 1997, when the film was on the cusp of it's 30th anniversary. Now, 20 years later, he's finished the job.

The completed, 128-page adaptation is set for publication as a hardcover this summer by Titan Comics. Here's  a short promotional interview in which Morrison discusses the project.

Titan Comics: Tell us about your first contact with the Beatles' music.

Bill Morrison: When I was about five, the first record album that I owned was a record of Alvin and the Chipmunks singing The Beatles’ hits. Then, like everyone else in America, I saw The Beatles on TV on The Ed Sullivan Show, and we all went nuts. We knew it was a big deal. I remember, growing up, having Beatles music on in the house all the time. Between my brother and my two older sisters, we had the whole catalog. It was probably in the 70s that I saw Yellow Submarine on television for the first time.

Titan Comics: What did you enjoy about Yellow Submarine when you first saw it?

Bill Morrison: I think the design aspect of the characters and the look of the whole movie. Growing up, when I was about 10 in the early 70s, I really became a fan of (U.S. pop artist) Peter Max. I know he had nothing to do with the film, but there was definitely a similarity in style. I was really taken by that look.

When I first saw Yellow Submarine, I was really taken by the way it flowed and the design of everything.

Titan Comics: What gave you the idea to adapt Yellow Submarine into a comic?

Bill Morrison: When the film was nearing its 30th anniversary in 97 or 98, I was given the opportunity to create an adaptation for Dark Horse Comics. I was really excited and I jumped at the chance. Originally, it was going to be a 48-page adaptation. I did an initial cover and 25 pages but then had to stop as the deal fell through. But now I’m finally able to pick it up again.

Titan Comics: How did you approach adapting the film into a graphic novel?

Bill Morrison: I needed to take advantage of the graphic medium that it’s being presented in. I started asking myself, “what do comic books and print have that they can’t really do in a film? I hit on the idea of really making each page look like a poster — like psychedelic blacklight posters that I used to have all over my walls in the 70s. I thought I could make these pages graphically stimulating. So I started designing the pages with that in mind — with that graphic poster sensibility — and I got really excited about it. People who have seen the pages — fans of the original movie — have really liked it and thought “he’s doing something different with it.”

Titan Comics: How do you think the Yellow Submarine film has aged over the years?

Bill Morrison: It’s definitely a film of its time but it does hold up. You can watch it and it doesn’t feel dated — especially if you have a nice crisp print of it. The colors are vibrant, the music’s great, the animation is wonderful. It definitely holds up really well.
I’m watching it over and over again for the graphic novel adaptation and it’s just fun — it doesn’t get old. There’s always so much to look at. I think it’s brilliant. 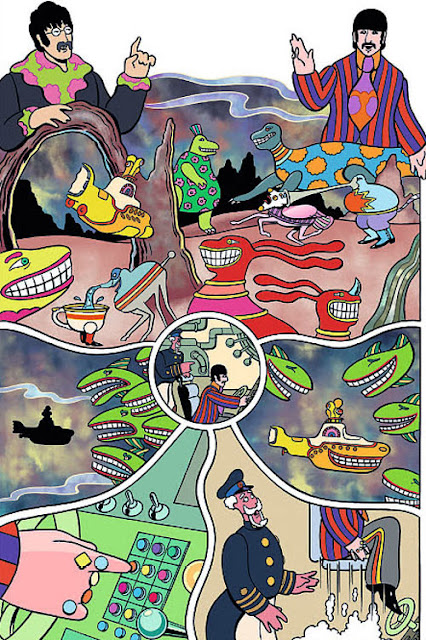