Jurgen Vollmer, one the Beatles' artsy Hamburg friends, shot the photo of John used on the cover of his 1975 Rock'n'Roll album. Here's a "thank you" John sent him after the album's release. 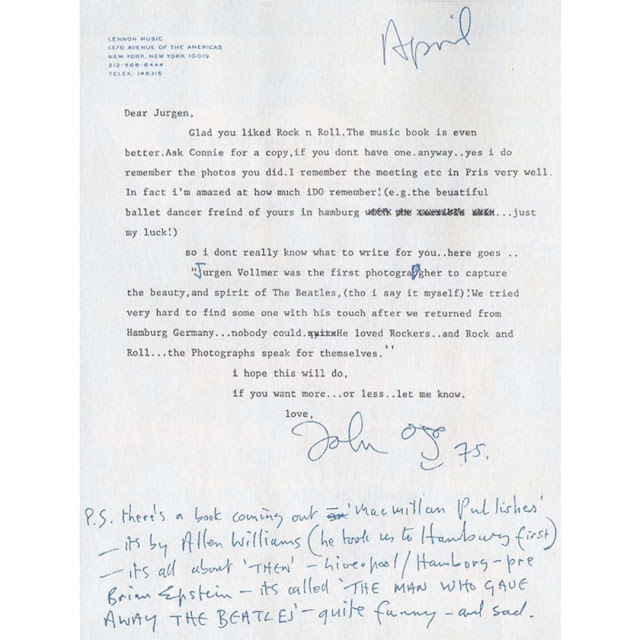 LETTER TO JÜRGEN VOLLMER, 1975⠀
Dear Jurgen,⠀
Glad you liked Rock n Roll. The music book is even better. Ask Connie for a copy. If you don’t have one. Anyway… yes I do remember the photos you did. I remember the meeting etc in Paris very well. In fact I’m amazed at how much I DO remember! (e.g. the beautiful ballet dancer friend of yours in hamburg [crossed out] just my luck!)⠀
⠀
So I don’t really know what to write for you … here goes …⠀
⠀
‘Jurgen Vollmer was the first photographer to capture the beauty, and spirit of The Beatles, (tho I say it myself)! We tried very hard to find someone with his touch after we returned from Hamburg Germany … nobody could. He loved Rockers … and Rock and Roll … the photographs speak for themselves.’⠀
⠀
I hope this will do,⠀
If you want more … or less … let me know ⠀
Love,⠀
John '75⠀
⠀
PS there’s a book coming out – ‘Macmillan Publishers’ – it's by Allan Williams (he took us to Hamburg first) – it’s all about ‘THEN’ – Liverpool/Hamburg – pre Brian Epstein – its called ‘THE MAN WHO GAVE AWAY THE BEATLES’ – quite funny – and sad. 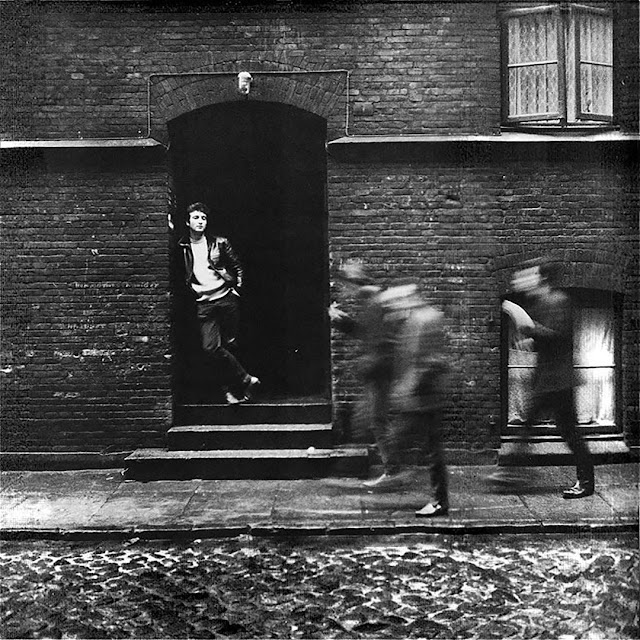 On the 40th anniversary of John Lennon's Rock'n'Roll covers LP, Goldmine magazine catches up with Jürgen Vollmer, the Hamburg pal who supplied the cover shot.

Vollmer took the photo of Lennon leaning in a doorway at Jagerpassage 1, Wohlwillstrasse 2 in Hamburg in 1962.


“Before I even started taking any pictures, I said to John, ‘You just lean there and look arrogant, like you always do,’” Vollmer recalled with a laugh. “And I wanted the other three out of focus.”

The other three in the shot were Paul McCartney, George Harrison and the group's then-bassist Stu Sutcliffe.

Year's later, Lennon's girlfriend called Vollmer out of the blue, asking if John could use the photo on the cover of his new LP. Vollmer said yes, but earned only $750 for the shot. 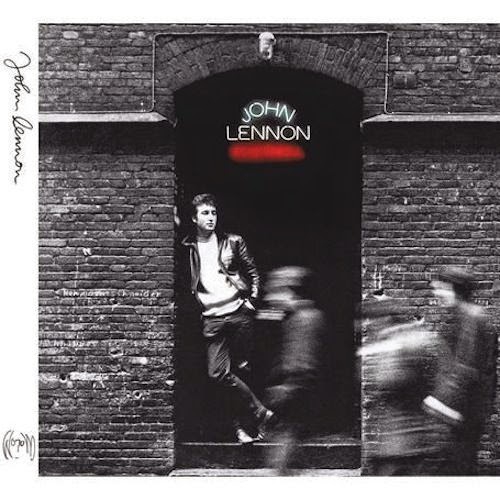