Ken Dodd, who died at age 90, was an institution in England, but is probably best-known to American Beatles fans for the TV clip shared below. 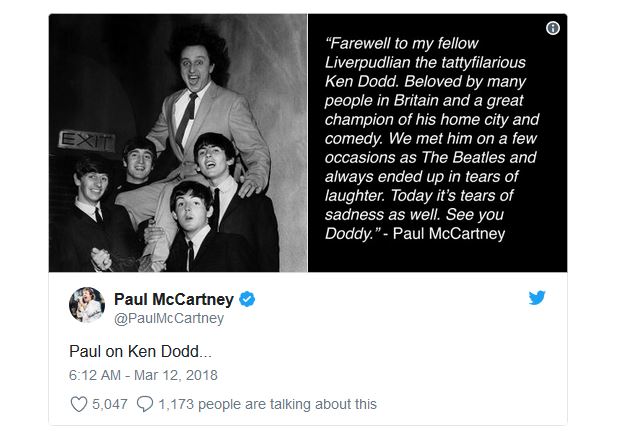 
Dodd, knighted last year, was named Greatest Merseysider of All Time in 2003, an accolade that moved him to say:  “It was voted for by my fellow citizens in a city that has always been, and always will be, my home. I am filled with happiness. I shall raise several glasses of tickle tonic to the greatest place in the world.”

He was still touring last year, his set combining comedy, magic and even music. Dodd was a successful musician in the 1960s, scoring the best-selling single of 1965 (‘Tears’), which became one of the UK’s top-selling tracks of the entire decade. The top five best-selling singles of the 1960s were released, of course, by The Beatles.