British author Robert Webb has just published a mini-biography of John Lennon as part of the History Press' PocketGIANT series, which also includes volumes Jesus, Napoleon and Ghandi, among others.

Here, he discusses the challenges of capturing Lennon's life in just 125 pages. 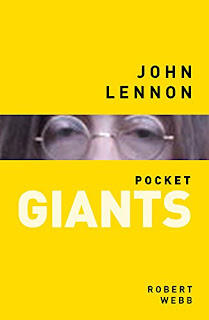 How was John Lennon selected as a subject for the pocket GIANTS series - it appears he is the only musician?

Yes, I think apart from Verdi, Lennon is the only musical figure in the pocket GIANTS series so far. It’s a lively series comprising short, concise biographies of historical figures from all periods and across all disciplines. I proposed Lennon for the series as I consider him one of the most iconic and influential figures in popular culture – a true giant of the twentieth century. Also because, unlike Sinatra, Elvis etc., he was also active beyond music, fashion and popular media, primarily as a peace campaigner.
How did you come to write the book for the series?

I have written on music and popular culture as a freelance journalist and author for thirty years or so, and have been listening to Lennon and the Beatles since the Sixties. As I explain, he’s always fascinated me as a flawed genius and someone who was attracted by both the popularism of rock and roll and the artistic potential of the avant-garde, which of course he was able to explore with Yoko. A lot of his music and artistic endeavours has been an attempt to weld the two – remember, "Revolution 9" is reckoned to be the most widely circulated avant-garde artefact. Sometimes his experiments worked, sometimes not, but as I say in the book – you always get the feeling he means it. He bore his heart on his sleeve, and that’s irresistible in any musician.

It was a challenge, I'm sure, to detail John's life - before, during and after - in such a short number of pages was a major challenge. How did you manage it? What did you focus on?

I think this is the only concise paperback biography of Lennon available – a contrast to the 500-page biographies that have appeared over the years, as excellent as some of them are. The brief wasn’t to write a glowing portrait of the man, but rather to take a step back and be critical where needed. Lennon’s life was relatively short, but of course he packed a lot in and distilling it all down into 125 pages was a challenge – it was a case of what to leave out, rather than scrabbling around for details to include, whilst at the same time ensuring I covered all the milestones in his life and the events and people who helped shape it the most. I also include a timeline, which for space reasons was even more difficult to assemble!

Although his fractured childhood was important to the telling of his story, the focus had to be his life in the Sixties and Seventies, his work as a musician and his calls for peace, which made him a dangerous radical according to the FBI. As a campaigner I believe he was a visionary, but he was also at times naïve, which I think he later recognised himself. His personal life is well documented but I was also interested to explore his backstage relationships with the other Beatles, during and after, as well as with Cynthia, Yoko and May Pang. What comes across I think is a creative genius who struggled to navigate his way through the pressures of fame and to face up to his shortcomings as a husband and father – until Sean was born, when suddenly he got it together!

Books, magazines, and the Internet especially, are rife with Lennon quotes – frequently unsourced and often wrong. My book is not an academic work as such – it’s a far from dry read I hope – but I did want to provide sources for all the quotations I used, as far as possible. I was able to track down lots of magazine and radio interviews – some fairly obscure – conducted with Lennon and those around him, and draw on those, rather than relying just on secondary sources. Aunt Mimi, especially, was particularly revealing in the few interviews she did about the nephew behind the fame!

Who do you think is the audience for a book like this? What do you hope readers take away from it?

Remember that although the Beatles’ and Lennon’s records are constantly on the radio and amongst the best-known in pop, many younger people are discovering them for the first time and are curious about the people behind those records. The book is for anyone who has an interest in the man, or loves his music but wants to know more – but doesn’t want to tackle one of the longer biographies on the market. Although it will hopefully provide a great summary of the man for any fan, it’s a great pocket book for anyone who’s just curious about who exactly John Lennon’s was. And maybe there will be a few things in there that even the seasoned fan may not know!

What is John's legacy? Do you think his influence on music and culture remains intact, or has it faded with the years?

Oh, his legacy is pretty intact, I think. You can hear his influences in so much music over the last couple of decades. Radiohead claimed they listened to Lennon and the Beatles while they were recording Ok Computer. David Bowie remained a huge fan to the end. Everyone from Oasis to Green Day to Melissa Etheridge have expressed their love of Lennon. Not so long ago, Madonna hailed him as “a real rebel” and “a real poet.” I’m sure his music continues to inspire younger bands and musicians.

Do you have any other Beatles-related projects on the horizon?

I have a couple of projects in the pipeline, which are sort of Beatles related. I’ll reveal more nearer the time!

Robert's book is published by The History Press; available at all good bookshops and from Trafalgar Square Publishing www.ipgbook.com.