How ridiculous are Quincy Jones' comments about the Beatles? 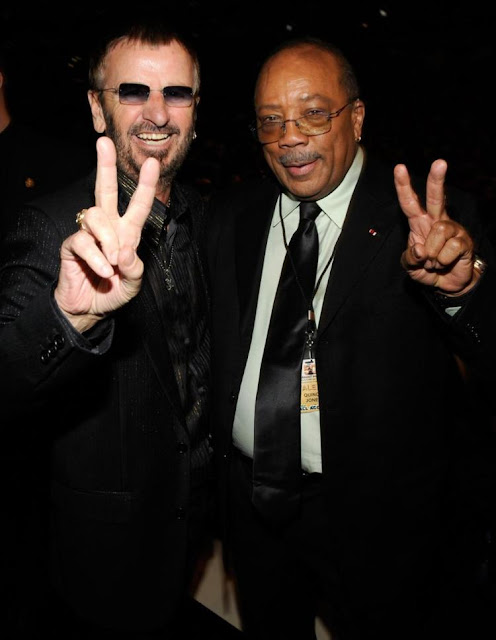 Making the rounds this week are some unkind remarks Quincy Jones made about the Beatles in an interview with Vulture. To wit:


What’d you think when you first heard rock music?
Rock ain’t nothing but a white version of rhythm and blues, motherfucker. You know, I met Paul McCartney when he was 21.

What were your first impressions of the Beatles?
That they were the worst musicians in the world. They were no-playing motherfuckers. Paul was the worst bass player I ever heard. And Ringo? Don’t even talk about it. I remember once we were in the studio with George Martin, and Ringo had taken three hours for a four-bar thing he was trying to fix on a song. He couldn’t get it. We said, “Mate, why don’t you get some lager and lime, some shepherd’s pie, and take an hour-and-a-half and relax a little bit.” So he did, and we called Ronnie Verrell, a jazz drummer. Ronnie came in for 15 minutes and tore it up. Ringo comes back and says, “George, can you play it back for me one more time?” So George did, and Ringo says, “That didn’t sound so bad.” And I said, “Yeah, motherfucker because it ain’t you.” Great guy, though.

Strong words. But how true are they?

For starters, I'm unaware of Paul mentioning that he'd met Quincy Jones in 1963, when Paul was 21. But Jones has mentioned this before:

George Martin and I go all the way back. We met before the Beatles and Rolling Stones came to America in 1964 because I had taken Lesley Gore over to England when she was number 1. I’d stay at his house near Oxford, and we’d go to a trout restaurant. Food, music, women, how you like to party—that’s what makes the greatest friendship, doesn’t it?

I met Paul McCartney back then and Mick Jagger, too, and we’d all talked about how well they knew American culture. In fact, I even made a bet with Paul that the Beatles wouldn’t happen in America. That was stupid.

It's possible that Jones met Paul during this time. "It's My Party" was on the EMI-distributed Mercury label and hit #9 (not #1) on the British charts in June 1963. Perhaps, Jones did meet George Martin and also Paul sometime in the summer of 1963, when the Beatles were well-known in Britain but virtually unknown in America. 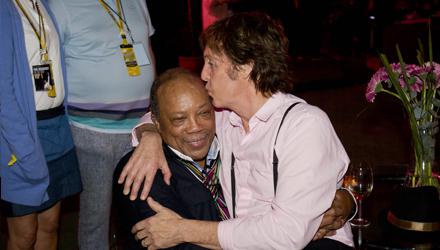 In regard to Paul's bass-playing. By no stretch is he the worst bassist in the world. In fact, many rank him among the best, especially when talking about pop/rock players. He's inventive, melodic and rock-solid. But Jones comes from the jazz world and has worked with many bassists who are technically much better than Paul. Could they have contributed what Paul did to the Beatles' music or his solo songs? No. But, on the other hand, Paul couldn't match what Ron Carter, Ray Brown or Jaco Pastorious played on jazz recordings.

Ringo's drumming is much like Paul's bass-playing. He's really good at what he does, serving the song, playing imaginatively and never losing the beat. The Beatles' music wouldn't have been the same without his contributions. Nope, he's not Max Roach or Art Blakey, but neither of those players would've been right for the Beatles' music.

What session recording session is Jones talking about, and was Ringo's playing replaced by that of Ronnie Verrell? The only known session on which Jones worked with Ringo and George Martin was on "Love is a Many-Splendored Thing" on Ringo's Sentimental Journey album.

On this album, Ringo was featured as a vocalist, singing mostly over big band arrangements of various pop and jazz standards. Noted arrangers, including Elmer Bernstein, Oliver Nelson and Jones, were asked to pen the instrumental backings for each track. Paul McCartney and the Beatles' Hamburg friend bassist Klaus Voormann also contributed arrangements for the album.

Jones initially recorded his arrangement of the song using a  27-piece orchestra in Los Angeles on Dec. 26, 1969. But this version was later re-made in London's Olympic Sound Studios in February 1970 using a 16-piece group that included electric bass, drums and conga and, eventually, an organ overdub played by Billy Preston. This session information comes from the trustworthy Beatles Bible site, but I'm unsure of the original sourcing.

Anyway, I suppose it's possible that Ringo played drums on this February re-make, but it's hard to know, because there's nothing at all complex or distinguished about the drum parts. It's basically someone keeping time in a moderate 4/4 tempo. There are no fills and nothing flashy. It's a drum part Ringo easily could've handled, or any other drummer, for that matter. There's no way to know, of course, but my feeling is that Ringo wouldn't have bothered drumming on a big session like this where anonymous studio musicians were hired to provide the backing track. And anonymous is exactly how it sounds. For all of Jones' ability as a great arranger, this one is bland as can be.

There's a long trend of people attempting to diminish the Beatles' accomplishments by assailing their abilities as musicians. Yes, none of them were/are virtuosos. But so what? You'll notice very few people attack the group's ability to write and arrange pop songs or innovate in the recording studio. That's because, when it comes to the finished product of a pop song or album, the Beatles' are unmatched. Trash talk them all you like, they've still recorded more great songs than you, whether you're Quincy Jones or anyone else.

"The songs Paul chose for Kisses on the Bottom are
songs I've heard and loved since I was a kid. I sat with Paul
backstage at the first concert of his recent tour and had the
privilege of listening to the entire record. These are some of the
best songs ever written, and it takes a very special talent to bring
them to light. Paul didn't bring 1/8th notes with him to these songs;
he knows how to swing like the old school or Sinatra used to say,
"he's in the pocket." There is simply no artist today who
has the credibility, grace, and depth of character that Paul has. Our
49-year-relationship goes back to before The Beatles came to America
and I love that Paul has taken the time to do this album. I've heard a
lot of records covering these songs, but none of them have the
authenticity that Paul's has."

That sounds like a publicist wrote it, so maybe that's why Jones sounds so gracious. If I have to choose between standards albums by Beatles, though, I'll go with Ringo's.

Bashing the Beatles is just one of the things Jones has done in two different interviews that appeared this week. He said all kinds of outrageous stuff about other people, too, which has us all questioning "why" and "are you ok?" Sadly, the only legacy he's really diminished by all this dirt-dishing is his own. 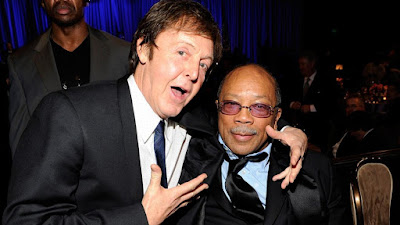