The famed choreographer Mark Morris discusses his Beatles-themed show, along with previews and an interview with jazz musician Ethan Iverson, formerly of the Bad Plus, who composed he score.

Watch: Excerpts from "Pepperland' by the Mark Morris Dance Group

Famed choreographer Mark Morris and composer Ethan Iverson (formerly of the Bad Plus) have created a touring dance show focused on the music of "Sgt. Pepper." You can read more about it here.

Here are a couple of excerpts:

Singer Johnny Hallyday, often called the "French Elvis," died this week at age 74. He met the Beatles early in their career and performed covers of several of their tunes, including "Girl" and "She's a Woman."

In 1964, Hallyday told Fabulous magazine: "I know The Beatles. I was with them the other night. John — he is so funny — gave me an address in London where I can buy boots like the ones he and the boys wear. You can't get them here [in Paris].” 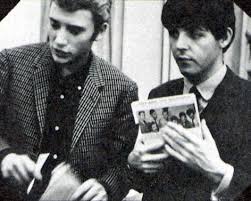 Here's a look at "Pepperland," a ballet by famed choreographer Mark Morris that uses the music of the Beatles. The score, which I'd love to hear, features arrangements by jazz pianist Ethan Iverson of the Bad Plus.

A Paul McCartney fan was arrested and removed from the ex-Beatles' concert in Melbourne this week because he started dancing on his seat.


The Paul McCartney fan also said he was left bruised by the altercation and was locked up for several hours, causing him to miss the gig he had shelled out big bucks for.

Michael appeared emotional as he described his recollection of the experience.

'It was the worst experience of my life because I was so helpless,' he explained.

...However, Victoria Police have since denied Michael was arrested simply for dancing.

The police also claimed other patrons made complaints about Michael's disruptive behaviour.

A choir comprised of patients at a British facility for people with dementia have recorded a version of Paul McCartney's "We All Stand Together" with Paul's approval. The song is included on a new benefit compilation album, Stand Together, credited to Choirs with Purpose." It's available here.

Former Beatles drummer Pete Best will play himself in a new comedy play set to the take the stage soon in Liverpool.

"Lennon's Banjo"...focuses on...which is considered to be the holy grail of pop memorabilia.

The instrument has been missing for six decades and it is now worth millions to the person that discovers it.

Set in present day Liverpool, the play is based on Rob and Helen A Jones's novel 'Julia’s Banjo.'

Pete said: “I read the novel...some years ago and thought it was a great mix of fact and fiction with regards to the Beatles and the elusive banjo.

“It made me smile; a really enjoyable read.

“So, when speaking to Rob Fennah about the book becoming a stage play, I said in passing, ‘I should play me!’

“And low and behold, here I am doing a few of the performances."

Here's a fun story from an Australian reporter nervous about interviewing Paul McCartney. Turns out he's a big teddy bear.

He was delightful and interesting. He has lovely kind eyes and a gentle way of speaking. I was so happy to see that I was going to walk away with my admiration of him enhanced.

"Sir Paul," I said at the end of the interview.

"I've been very fortunate in my career that I've had the chance to interview world leaders, like Aung San Syu Kii and the Dalai Lama, every celebrity you can think of, Elton John, Patti Smith, but I've never interviewed somebody of whom I'm a bigger fan than you.

-----
Dangerous Minds has a write up on Paul McCartney's "Unforgettable," the, um, forgettable compilation tape he assembled for his fellow Beatles back in 1965.

"I would sit around all day, creating little tapes. I did one once called Unforgettable and used the Unforgettable Nat King Cole “Is what you are ...” as the intro. Then did a sort of “Hello, hello ...” like a radio show. I had a demo done by Dick James of that, just for the other guys because it was really a kind of stoned thing. That was really the truth of it."