Singer Peggy Lee (1920-2002) would be celebrating her 100th birthday today and Paul noted the centenary on Twitter.

As Paul mentions in his tribute, the Beatles recorded "Till There Was You," a hit for Lee from "The Music Man." But he doesn't mention that he later wrote his own tune for Lee: "Let's Love," which she recorded in 1974.

Here's Paul's Twitter tribute followed by Lee's version of "Let's Love" and then Paul's original demo, which appeared on the Venus and Mars Deluxe Edition in 2014. 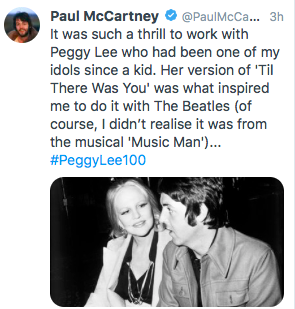 Email ThisBlogThis!Share to TwitterShare to FacebookShare to Pinterest
Labels: Let's Love, Peggy Lee, Till There Was You
Older Posts Home
Subscribe to: Posts (Atom)