Ultra Rare "Beatle Bus" Atlanta Transit System Promotional Sign, August 18, 1965. It's difficult to image the Atlanta Transit System getting into the spirit of the Beatles appearance at Atlanta Stadium on August 18, 1965, but this 22.75" x 9.5" stiff cardboard sign with a rather unflattering illustration of Ringo begs to differ. The sign remains in remarkable condition with light uniform toning to the white background, minor creasing at corners, and a few trivial scattered stains. Fine condition. From the Connie and Dennis Dailey Monumental Beatles Collection.

Email ThisBlogThis!Share to TwitterShare to FacebookShare to Pinterest
Labels: Atlanta

Unlike most shows on their summer 1965 tour of America, the Beatles could actually hear themselves play when they performed in the newly constructed Atlanta Stadium on Aug. 18.

The show featured a then-new, but now universal concept: On stage monitor speakers that allowed the group to hear their own sound directly, rather than what was coming out of the amps and speakers facing the crowd.

Both the band and its manager, Brian Epstein, remarked favorably about the sound after the Beatles' performance.

According to a new article in the Atlanta Journal-Constitution:


Epstein sent the engineers at Baker Audio a thank you note later, saying the sound was “Excellent. Without question proved the most effective of all during our U.S. tour 1965.”

F.B. “Duke” Mewborn of Baker Audio said he used four Altec 1570 tube amplifiers, generating about 500 watts in power, or slightly less than the power in Mewborn’s home stereo today. (When Paul McCartney performs nowadays he uses something like a 300,000-watt system.)

The Beatles offered Mewborn a position as the sound man for the rest of their tour, but Mewborn declined. According to Keith Hicks, Baker’s current president, Mewborn “basically said he didn’t see much future in four guys with long hair.”


The story also features some interesting details about the Vibrations, a local surf music combo, that ended up performing at the show, along with the Beatles' regular opening acts for the tour, which included King Curtis and Cannibal and the Headhunters.


The Vibrations showed up early at the stadium, proudly wearing their collarless jackets and hauling their new Vox Super Beatle amps, provided by the music store.

Epstein told them to beat it. Then, fate intervened. John Lennon’s Vox organ was somehow damaged during the trip from Toronto, and there was only one other Vox organ in Atlanta. It was at Thomas Organ. The Vibrations sent a runner up to the Buckhead music shop to fetch back a working instrument.

Lennon used the borrowed Vox organ and Epstein let the Vibrations open the show. Spencer Kirkpatrick, later to form the influential Atlanta band Hydra, was the junior member of the group, and the lead guitarist. Standing on that stage, in front of 34,000 people, the 14-year-old Kirkpatrick experienced every emotion known to man, from terror to elation.

The Vibrations played “Pipeline,” “Walk Don’t Run” and even an instrumental version of the Beatles tune “This Boy.” Then they listened to the rest of the music from the dugout. 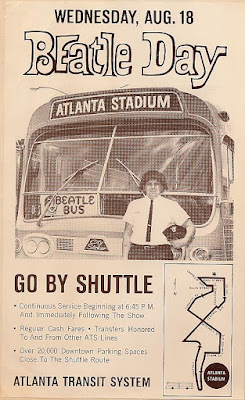