This week marks the release of George Harrison's Apple Years, a box set collecting all the studio albums he issued on the Beatles' own record label.

Inside are the classic All Things Must Pass and strong Living in the Material World, along with the less beloved Dark Horse and Extra Texture, and two downright oddballs: Wonderwall Music and Electronic Sound.

These last two are Harrison's first releases under his own name, but neither is the conventional solo album you might expect. Instead of Harrison singing pop songs, both albums are mainly instrumental.

Wonderwall is the soundtrack to a surreal 1968 film and features a mix of Indian classical music and instrumental rock from Liverpool's Remo Four and various others, including Eric Clapton and Ringo Starr.

Electronic Sound, meanwhile, is two sides of noodling around on the then-groundbreaking Moog synthesizer. Only the most devoted Harrison fan could love it, and few of them do. Mainly because there's the major sticking point of whether it's even George's music at all.

The consensus, years after the fact, is that it's at least half not.

Electronic Sound, from 1969, only has two "tunes" on it, one on each side of the LP. And electronic music pioneer Bernie Krause insists that side 2, "No Time Or Space" is all him, and that it's not a finished composition at all, just a recording of Krause and an associate demonstrating the Moog to Harrison during a recording session for Apple artist Jackie Lomax.


In a lawsuit filed after the album's release, Krause claimed this demonstration was recorded without his knowledge and issued without his permission.

Here is how Krause recalls things in his memoir, "Into a Wild Sanctuary: A Life in Music and Natural Sound":


[Harrison] said, "I want to play something for you that I did on synthesizer. Apple will release it in the next few months. It's the first electronic piece that I did with a little help from my cats." He hit the "play" button on the tape recorder.

At first I didn't recognize the material. However, little by little I became increasingly uncomfortable, knowing that I had heard this performance before.

After a few more minutes I realized that the recording was taken from the Lomax demo session I had played for Harrison only a few months earlier. A bit flustered, I finally rallied the courage to say "George, this is my music – the same stuff I played while demonstrating the Moog at the Lomax session in LA. Why is it on this tape and why are you representing it as yours?" "Don't worry," he responded with assurance, "I've edited it and if it sells, I'll send you a couple of quid."

"Wait a minute, George, you never asked me if you could use this material. It belongs to Paul Beaver and me and we need to talk about it." At which point he got red in the face, veins began to stand out along his neck, and he got pissed. Even Beatles don’t like to get caught. Beatles are not used to being told “No.”

"You're coming on like you're Jimi Hendrix," he responded, his voice rising in pitch and volume. "When Ravi Shankar comes to my house, he's humble." Then, as if not to be undone and seeing that I wasn’t impressed with his defense, he screamed his most famous line, "Trust me, I'm a Beatle!"

...The album, "Electronic Music," by George Harrison, was released some months later. But not before I had it recalled and ordered my name taken off the cover. I didn't have the money or juice to sue him.

...Rather then reprinting the album cover, Apple simply had my name silvered over. If you can find one of the old issues of the album, hold it in the right light and you can still faintly see my name – spelled incorrectly, of course. Although I did get credit on the inside jacket, along with his cats, I never did receive a single 'quid.' Also, the son-of-a-bitch never did invite me back to his house so I could show him my "I'm-as-humble-as-Ravi-Shankar" routine that I've been practicing ever since. 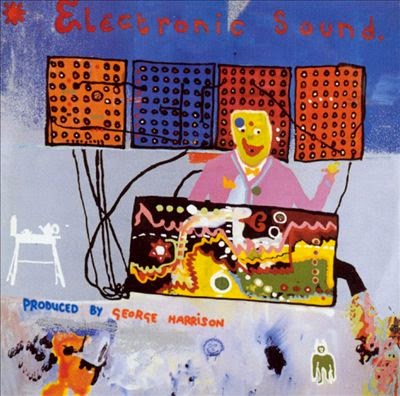 The new edition of the album, available separately and in the Apple Years box, provides this credit for side 2: "Recorded in California; with the assistance of Bernie Krause – November 1968."

Harrison reportedly did perform the album's first side, "Under the Mersey Wall," and painted the album's colorful cover, which features the credit "produced by George Harrison."

For his part, George pretty much disowned the album, dismissing it as "rubbish" and not saying much more about it.

Yet, it's know been reissued a couple of times on CD, now, and is being presented as part of his body of work.

It's unfortunate that Harrison's apparent appropriation of Krause's work has given it such an unpleasant air. Not that it's much fun to listen to, anyway.
at September 26, 2014 No comments: