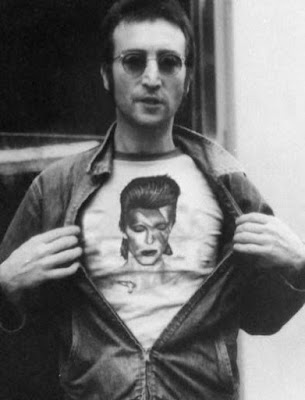 David Bowie producer/collaborator shares his memories about a nervous David Bowie meeting John Lennon for the first time in a new BBC interview, The Guardian reports.

Visconti, who produced 11 of Bowie’s studio albums, tells the story of how the pair met in a New York hotel room, ahead of their collaborations on Bowie’s 1975 song Fame and his cover of the Lennon-penned Beatles song Across the Universe.

“He was terrified of meeting John Lennon,” says Visconti, who was asked by Bowie to accompany him and “buffer the situation”. He added:

"About one in the morning I knocked on the door and for about the next two hours, John Lennon and David weren’t speaking to each other. Instead, David was sitting on the floor with an art pad and a charcoal and he was sketching things and he was completely ignoring Lennon. So, after about two hours of that, he [John] finally said to David, ‘Rip that pad in half and give me a few sheets. I want to draw you.’ So David said, ‘Oh, that’s a good idea’, and he finally opened up. So John started making caricatures of David, and David started doing the same of John and they kept swapping them and then they started laughing and that broke the ice."

Visconti says the pair’s “great friendship” was settled from then on. A week later, Bowie called Lennon to invite him to play on the Across the Universe cover; following the recording, a jam they worked up together became Fame, co-written with guitarist Carlos Alomar.