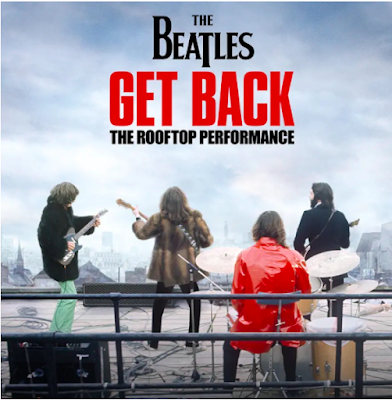 The complete audio from The Beatles' famed "rooftop" concert is now available to hearing on streaming services.

The full performance, disappointingly/ridiculously, wasn't included on last year's Let it Be Super Deluxe set and, in Peter Jackson's "The Beatles: Get Back" film, it was interrupted throughout by "man on the street" interviews with people hearing the music below. So, this is the first opportunity, aside from bootlegs, to hear the entire performance uninterrupted. Hopefully, we'll see vinyl and CD releases of this soon, too.

Giles Martin, who produced the Let it Be box, told Rolling Stone:

“We wanted to put it on the box set,” Giles Martin tells Rolling Stone in an exclusive interview. “But it just took up too much real estate. It’s 40 minutes, so it didn’t make any sense. But the response to Get Back has been so extraordinary.”

“I always thought the rooftop concert is better to be seen and listened to, rather than just listened to, [but] there was such an overwhelming request: ‘Why don’t we have this?’ That’s why we did it. I think this is more of a historical document for fans. I’ve made it so fans can listen to everything I have, really. I cut off a bit at the end, which is basically just wind noise, and that’s it. I mixed the whole thing from start to finish in its entirety.”

Here are details on the performances' streaming debut form the official news release:

On 30 January, 1969, The Beatles famously staged their final live performance on the rooftop of their Apple Corps headquarters in London’s Savile Row. This Sunday’s 53rd anniversary will be celebrated with an exciting slate of special releases, events and announcements, with The Beatles leading the charge.

For the first time, the complete audio for the band’s legendary rooftop performance has been mixed in stereo and Dolby Atmos by Giles Martin and Sam Okell. Apple Corps Ltd./Capitol/UMe/Universal Music Canada, the country’s leading music company will debut The Beatles: Get Back-The Rooftop Performance for global streaming Friday, 28 January, at 5am GMT.

Fans around the world have been exploring The Beatles’ January 1969 sessions and rooftop performance with last fall’s celebrated release of the band’s remixed, expanded Let It Be Special Edition (Apple Corps Ltd./Capitol/UMe), Peter Jackson’s “The Beatles: Get Back” docuseries (Disney/Apple Corps Ltd./WingNut), and the collectible hardcover book also titled The Beatles: Get Back (Apple Corps Ltd./Callaway). The raw sources explored for the new projects have revealed that a more joyous, benevolent spirit imbued the sessions than was conveyed in the 1970 Let It Be film’s 80 minutes, while also shining a new, warmer light on the Let It Be album.

In addition to the streaming release for The Beatles: Get Back-The Rooftop Performance, the anniversary celebration for The Beatles’ electrifying rooftop performance will continue with several more exciting announcements, tributes, and events:

Today, the Rock & Roll Hall of Fame announces a groundbreaking featured exhibit, titled The Beatles: Get Back to Let It Be, set to open on 18 March, 2022 and run through March 2023. An immersive complement to Peter Jackson’s “Get Back” docuseries, the multimedia exhibit will welcome fans to step into The Beatles’ January 1969 rehearsals, sessions, and witness the band’s final rooftop performance, surrounded by large-scale projections and superior sound. The scene is thrillingly set with original instruments, clothing, handwritten lyrics, and other unique items, including several on loan directly from Beatles principals. Special events to be hosted by the Rock & Roll Hall of Fame during the exhibit’s run, including interviews, film screenings, panels, and more will be announced throughout the year.

On Friday, 28 January, Norah Jones will release two rooftop tribute performance videos of Beatles songs from the Let It Be album, recently filmed with her band on the rooftop of New York’s Empire State Building. The two performances, “I’ve Got A Feeling” and “Let It Be,” will debut on Norah Jones’ YouTube Channel tomorrow at 9am PST / 12pm EST / 5pm GMT.

This Saturday, 29 January, The Beatles LOVE by Cirque du Soleil will debut a rooftop performance tribute video for “Get Back” (LOVE Version), featuring cast members from the acclaimed stage production, now in its 15th year of wowing audiences at The Mirage Las Vegas. The performance video will debut on Cirque du Soleil’s YouTube Channel at 6am PST / 9am EST / 2pm GMT. A behind-the-scenes/making-of video for the cast’s rooftop tribute performance will debut an hour later on the channel at 7am PST / 10am EST / 3pm GMT.

This Sunday, 30 January, the 53rd anniversary of The Beatles’ rooftop performance, Disney/Apple Corps Ltd./WingNut will present a special screening event exclusively at IMAX theaters in the US and UK of “The Beatles: Get Back-The Rooftop Concert.” The 60-minute feature presents The Beatles’ complete rooftop performance following a brief introduction. The special event screenings will begin with an exclusive filmmaker Q&A at 12pm PST / 3pm EST / 8pm GMT. The concert, which features in its entirety in the Disney+ original docuseries “The Beatles: Get Back,” is optimized for IMAX screens, digitally remastered into the image and sound quality of The IMAX Experience® with proprietary IMAX DMR® (Digital Remastering) technology. Tickets for the Exclusive IMAX Event Screening and Filmmaker Q&A are on sale at: tickets.imax.com.

Email ThisBlogThis!Share to TwitterShare to FacebookShare to Pinterest
Labels: Let it Be (album), Let It Be (film), rooftop concert, The Beatles Get Back (Peter Jackson film)

London police officer Ray Dagg's uncomfortable arrival at Apple HQ in response of noise complaints from The Beatles' rooftop show is one of the highlights of Peter Jackson's "The Beatles: Get Back" documentary.

Here he is giving his side of the story. 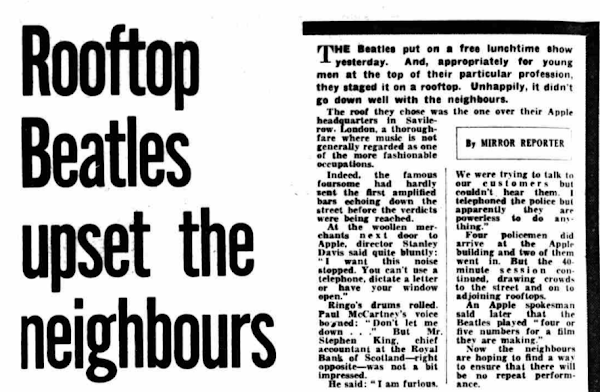 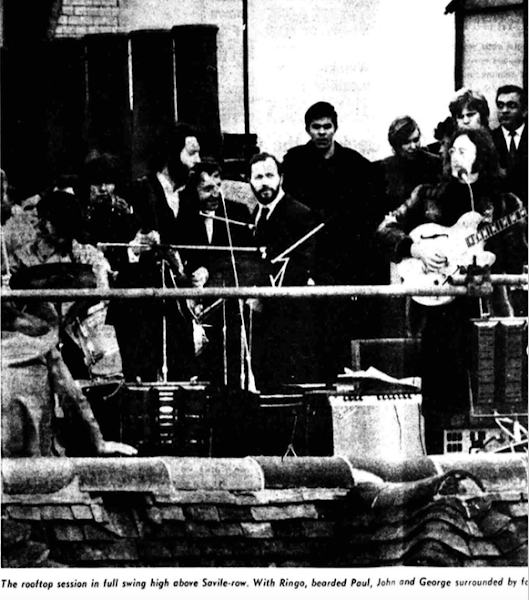