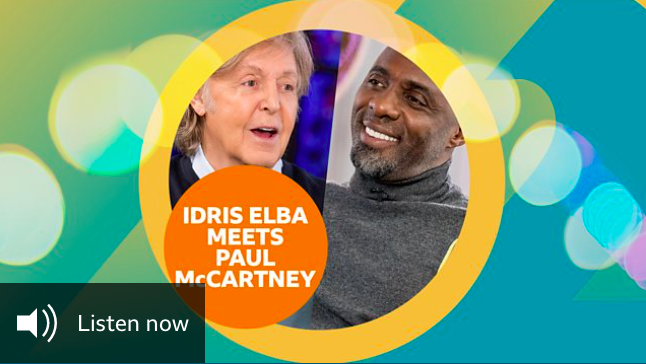 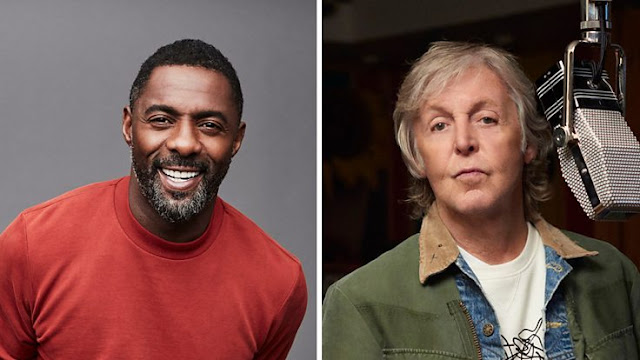 A new program announced by the BBC today:

BBC One and BBC Music are proud to announce Idris Elba meets Paul McCartney, a world exclusive show featuring music legend Paul McCartney in conversation with one of the most popular British actors of his generation, Idris Elba, to be broadcast on BBC One and BBC iPlayer in December, and on BBC Radio 2 and BBC Sounds.

This 60-minute entertainment special, to be recorded in London in the coming weeks, will see Idris interview Paul about his peerless career as the most successful musician and composer in pop music history, which began when he wrote his first song at the age of 14. The show will span Paul’s incredible history-making journey right up to the present day, as he continues to influence new generations, including Paul’s solo material and collaborations.

Paul will talk about his writing process which has produced some of the best loved and most performed songs ever. Idris will seek to find out what inspires Paul to continue to innovate creatively, on the eve of the release of his 26th post-Beatles album McCartney III, the third album in a trilogy of classics featuring Paul playing every instrument and writing and recording every song. Paul launched his solo career in 1970 with the release of McCartney.

Idris is a Golden Globe winning and multi Emmy nominated actor, producer, director, and musician who is the first male actor to receive dual Screen Actors Guild awards in one evening. Elba recently received the Bafta Special Award in recognition of his exceptional career and commitment to championing diversity and new talent in the industry. He can next be seen in Concrete Cowboy, The Suicide Squad and The Harder They Fall and is currently in production on George Miller’s Three Thousand Years Of Longing with Tilda Swilton. Idris is best known to BBC One viewers as DCI John Luther in Luther, the psychological crime drama which debuted in 2010. During the five series, Idris has been awarded with a Critic’s Choice television award, Golden Globe award and Screen Actors Guild award for his performance as John Luther, as well as four nominations for outstanding Lead Actor in a Miniseries or Movie at the Primetime Emmy awards.

Paul has sold over 100 million solo singles and over 700 million albums, generating over 1 billion worldwide record sales whilst winning over 70 major global awards - including 18 Grammys and 8 Brit awards. In 1990, Paul set the world record for largest concert attendance ever in Brazil 184,000 people and since the turn of the century alone Paul has played almost 500 concerts around the world.

Idris says: “When I was asked if I wanted to speak to Paul McCartney, after I realised it wasn’t a joke, I immediately said yes… who wouldn’t?! I am a massive fan of Paul’s! His work has inspired and driven me as a musician, and once I get through the shock of sharing the stage with him, I’m excited to talk about his music and craft. What an honour! Looking forward to sitting with you Paul.”

Paul says: “I’m looking forward to sitting down to a chat with the mighty Idris!”

Kate Phillips, Acting Controller, BBC One, says: “Paul McCartney has undoubtedly created some of the UK’s best loved songs, songs which are known throughout the world, so I’m thrilled that he’ll lift the lid on how he continues to create lyrics and music that will forever stand the test of time. The must see combination of Paul in conversation with one of our best loved actors and super fan, Idris Elba, as well as an incredible live performance from the Cavern, are the perfect Christmas presents for BBC audiences."

The original Cavern Club in Liverpool was where The Beatles played nearly 300 times between 1961-63. Over 50 years later in July 2018, Paul played a secret gig at the legendary venue, performing a 28-song set to 250 lucky gig-goers. Paul and his band performed songs from the 60s to (his then new album) Egypt Station, which was released 54 years after The Beatles had claimed their first hit Number One on the Billboard Album Charts. BBC One will broadcast this very special performance in December, with viewers being able to enjoy blistering performances of songs including I Saw Her Standing There, Lady Madonna, Band On The Run and Come On To Me.