This week's saddest news for Beatles fans was the death of Sir George Martin at age 90.

Without him, who knows what might have become of the Beatles. Not only did he sign them to a record deal after they'd been rejected by every label head in Britain, he allowed them to record their own tunes and, later, encouraged and aided them in their groundbreaking studio experimentation, helping to create and pioneer new approaches to recording and making music.

Tributes to Martin have been numerous this week.

Ringo Starr tweeted: "God bless George Martin peace and love to Judy and his family love Ringo and Barbara. George will be missed." and "Thank you for all your love and kindness George peace and love."

While Martin's son, Giles, said:  "RIP dad. I love you. I'm so proud to have been your son. I'll miss you more than words can say. Thank you for the all times we had together."

And Sean Ono Lennon posted: "R.I.P. George Martin. I'm so gutted I don't have many words. Thinking of Judy and Giles and family. Love Always, Sean."

And Paul McCartney wrote an extensive tribute on his website:


I'm so sad to hear the news of the passing of dear George Martin. I have so many wonderful memories of this great man that will be with me forever. He was a true gentleman and like a second father to me. He guided the career of The Beatles with such skill and good humour that he became a true friend to me and my family. If anyone earned the title of the fifth Beatle it was George. From the day that he gave The Beatles our first recording contract, to the last time I saw him, he was the most generous, intelligent and musical person I've ever had the pleasure to know.

It's hard to choose favourite memories of my time with George, there are so many but one that comes to mind was the time I brought the song 'Yesterday' to a recording session and the guys in the band suggested that I sang it solo and accompany myself on guitar. After I had done this George Martin said to me, "Paul I have an idea of putting a string quartet on the record." I said, "Oh no George, we are a rock and roll band and I don't think it's a good idea." With the gentle bedside manner of a great producer he said to me, "Let us try it and if it doesn't work we won't use it and we'll go with your solo version." I agreed to this and went round to his house the next day to work on the arrangement.

He took my chords that I showed him and spread the notes out across the piano, putting the cello in the low octave and the first violin in a high octave and gave me my first lesson in how strings were voiced for a quartet. When we recorded the string quartet at Abbey Road, it was so thrilling to know his idea was so correct that I went round telling people about it for weeks. His idea obviously worked because the song subsequently became one of the most recorded songs ever with versions by Frank Sinatra, Elvis Presley, Ray Charles, Marvin Gaye and thousands more.

This is just one of the many memories I have of George who went on to help me with arrangements on 'Eleanor Rigby', 'Live and Let Die' and many other songs of mine.

I am proud to have known such a fine gentleman with such a keen sense of humour, who had the ability to poke fun at himself. Even when he was Knighted by the Queen there was never the slightest trace of snobbery about him.

My family and I, to whom he was a dear friend, will miss him greatly and send our love to his wife Judy and their kids Giles and Lucy, and the grandkids.

The world has lost a truly great man who left an indelible mark on my soul and the history of British music.

God bless you George and all who sail in you!

One odd but touching tribute to George Martin came from his near namesake, "Game of Thrones" author George R.R. Martin. After assuring fans that he was still alive, the fantasy author wrote on his blog:

"He will be missed. I never met Sir George (I did meet Paul McCartney once, for about a minute, while waiting for the valet to bring my rental car up at the Four Seasons in Beverly Hills), but like many millions of others, I loved the Beatles, and Martin's contribution to their music is worthy of recognition and honor."

A Christmas thank you letter that 11-year-old John Lennon sent to his Aunt Harriett in 1951 is going up for auction. In the letter, John writes:


“Dear Harrie Thankyou for the book that you sent to me for Christmas and for the towel with my name on it, And I think it is the best towel I’ve ever seen.

“The book that you sent to me is a very interesting one. I am at the bottom of page 18 at the moment. The story is famous Ships its all about a man called Captain kidd the pirate.

“Thankyou for the red jumper that you sent to me.

“I hope you have a happy new year. Love from John x” 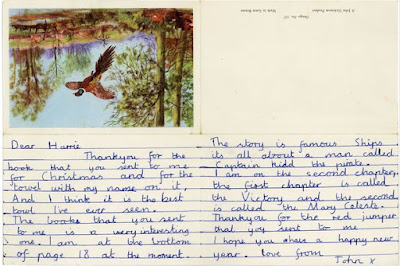 A study published in the Journal of Advanced Nursing says the lyrics of the Beatles' "When I'm Sixty-Four" could cause health-damaging self-esteem issues for older people.

The song lyrics “when I get older, losing my hair, many years from now, will you still be sending me a Valentine, birthday greeting, bottle of wine”, associate old age with being “unlovable.”