Beatles historian in video conversation with the World in Your Ear podcast.


World authority on the Beatles joins us for a Word In Your Attic, talking about the facts you can glean from even the most ancient, blurriest picture, how he discovered the derivation of the riff John Lennon used to employ to lift their spirits in the olden days and trying to be patient when we ask when we can expect volume 2. Furthermore he offers you the chance to win an almost unique baseball cap celebrating this old gag if you can provide a comparable example.

Abbey Road and the Swan Song Myth: The Beatles didn't plan it as their last LP, but it was 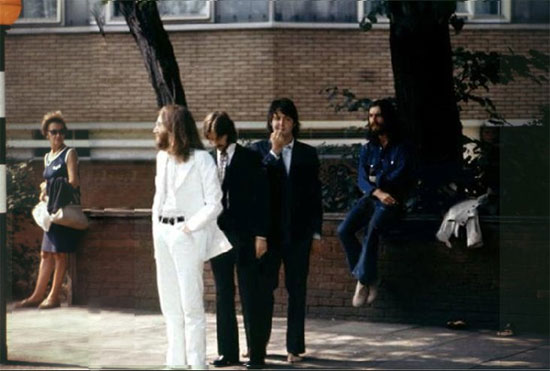 The Guardian today talks to Beatles historian Mark Lewisohn about a meeting tape from Sept. 8, 1969, that includes John, Paul and George discussing plans to record an album after Abbey Road, which ended up being the group's final LP.

The meeting discussion focuses on songwriting, and the right of each Beatle to contribute songs equally (or, relatively equally in Ringo's case) to their LPs. George, especially, was frustrated that he'd been relegated to only one or two songs per album.


...we hear John suggesting that each of them should bring in songs as candidates for the single. He also proposes a new formula for assembling their next album: four songs apiece from Paul, George and himself, and two from Ringo – “If he wants them.” John refers to “the Lennon-and-McCartney myth”, clearly indicating that the authorship of their songs, hitherto presented to the public as a sacrosanct partnership, should at last be individually credited.

Then Paul – sounding, shall we say, relaxed – responds to the news that George now has equal standing as a composer with John and himself by muttering something mildly provocative. “I thought until this album that George’s songs weren’t that good,” he says, which is a pretty double-edged compliment since the earlier compositions he’s implicitly disparaging include Taxman and While My Guitar Gently Weeps. There’s a nettled rejoinder from George: “That’s a matter of taste. All down the line, people have liked my songs.”

John reacts by telling Paul that nobody else in the group “dug” his Maxwell’s Silver Hammer, a song they’ve just recorded for Abbey Road, and that it might be a good idea if he gave songs of that kind – which, John suggests, he probably didn’t even dig himself – to outside artists in whom he had an interest, such as Mary Hopkin, the Welsh folk singer. “I recorded it,” a drowsy Paul says, “because I liked it.”

While there's a common notion that the Beatles planned Abbey Road as their swan song, the tape indicates otherwise.

But it's not the only evidence showing this is true.

Abbey Road, in 1969, wasn't marketed as the final Beatles album and the group didn't describe it as such in interviews during the time. So far as the public knew - and perhaps so far as the band itself knew - the Beatles would likely record again.

Still, there was a growing sense among the group that its days were numbered. The idea that the Beatles might break up was in the back of all their minds, and had been discussed repeatedly during the Get Back/Let it Be sessions, as in this exchange from Jan. 7, 1969:


George: We should have a divorce.

Paul: Well, I said that at the last meeting. But it's getting near it.

John: Who’d have the children?

Discussing Abbey Road years later, George Harrison said: "I didn't know at the time that it was the last Beatles record that we would make. But it felt as if we were reaching the end of the line."

Interestingly, the end of the line came very shortly after the Sept. 8 discussion about the next LP.

The same day as saying publicly that he wished to record again with the Beatles, John departed for Toronto to perform at the Rock and Roll Revival festival with a hastily assembled version of the Plastic Ono Band that included Klaus Voormann, Eric Clapton and Alan White.

On the way, he reportedly told Allen Klein that he was leaving the Beatles. In the midst of re-negotiating the band's recording contract at the time, Klein told John that he understood, but to keep quiet about his plans.

At a Sept. 20 group meeting, however, as Paul brainstormed future plans for the group, John expressed his own wish for a "divorce" and announced that he was leaving the group. Five days later he was in the studio with Klaus, Clapton and Ringo, recording "Cold Turkey" for solo release.

The experience of performing with the other musicians, and the other Beatles' rejection of recording "Cold Turkey" as a single, likely prompted John's decision to quit. Going solo, he wouldn't have to fight for space for his songs on Beatles' albums. He could choose for himself what songs to release as singles. Above all, he could escape the increasingly tense group atmosphere each member of the band was feeling. He was more interested in creating music and art with Yoko at this stage, anyway. The Beatles had run their course.

Ringo briefly quit the band during the "White Album" sessions. George walked out during the making of Let it Be. But it took John's announcement that he was leaving to finally end the band.

It was only in later years that the idea of Abbey Road as a deliberately planned final album took hold, with even producer George Martin framing it as such in the Beatles' Anthology:


“Let it Be was such an unhappy record (even though there are some great songs on it) that I really believed that was the end of The Beatles, and I assumed that I would never work with them again.  I thought, 'What a shame to end like this.'  So I was quite surprised when Paul rang me up and said, 'We're going to make another record – would you like to produce it?'  My immediate answer was:  'Only if you let me produce it the way we used to.'  He said, 'We will, we want to.' - 'John included?' - Yes, honestly.'  So I said, 'Well, if you really want to, let's do it. Let's get together again...(but) If I have to go back and accept a lot of instructions which I don't like I won't do it...'  It was a very happy record.  I guess it was happy because everybody thought it was going to be the last.”

And, while it may not have been planned as such, Abbey Road certain works as a last album. "You Never Give Me Your Money" references the band's financial squabbles and disagreement over Klein's management. It also expresses loss - the ending of a dream - but also new possibilities:

And the aptly named "The End," with it's simple lyric, is the perfect summation of the Beatles' career and musical philosophy:

September 2019 marks the golden anniversary of the Beatles' multi-platinum album Abbey Road - the last work they recorded before their seismic breakup. Released in September 1969, it was the end of both the Sixties and the biggest and greatest band of all time.

To explore this anniversary, the world's leading Beatles historian, Mark Lewisohn - whose highly-acclaimed Tune In is the first part of the band's definitive biography - will embark on a 21-date UK tour with his newly-created Abbey Road show HORNSEY ROAD.

This two-hour live theatre presentation - full of surprises, delights, humour and excitement - will be a swift and smart illustrated history of our forever national-heroes the Beatles and their biggest album Abbey Road, providing a unique insight into the band who changed the course of culture and whose influence is still substantial.

HORNSEY ROAD illuminates Abbey Road from every angle, telling the stories behind the songs and the lives of its four creators, John Lennon, Paul McCartney, George Harrison and Ringo Starr - the youngest of them just 26, the eldest 29 at the time it was made. The show will explore the many momentous events that occurred during its recording, when the Beatles were creatively together inside the studio but falling apart outside. This was the year of their breakup, and the album was made at a time of turmoil in their personal and business lives, when two of them were newly married and the band lost business assets and couldn't agree on future direction.

Mark Lewisohn has the world's best archive of Beatles materials, harvested over 40+ years of unrivalled deep access to public and private collections. On stage he will be talking audiences through a stunning array of strong and relevant content, with rare music, photos, films and collectable artefacts.

Mark comments: "HORNSEY ROAD is all about Abbey Road, the people who made it and the time in which they did it. This artistic triumph was created at a hectic junction in the Beatles' lives, and I'm going to be revealing the rich history, refreshing the remarkable stories behind its making, and bringing it all back by sight, sound and smell. I'll be delivering an original and surprising look at this collection of great songs, superbly recorded by the Beatles and their producer George Martin fifty summers ago, and packaged in that highly-imitated cover art of the four of them on the zebra crossing in north London. I'll be explaining the album's making in the context of the 1969 contemporary music scene, and depicting the four Beatles as friends, bandmates and artistic individuals at the peak of their creative powers, crowning the many precedent-setting events of their previous six years together with this glorious parting shot."

The favourite Beatles album of many, praised by the Daily Telegraph as "lush, rich, smooth, epic, emotional and utterly gorgeous", Abbey Road wasn't just another triumphant chapter in the Beatles' unparalleled time together, it was their best-selling and last-created work, regularly voted high among the greatest albums of all time. Still now, half a century on, it remains a remarkable collection of tracks, ripe for the deep celebratory dive that HORNSEY ROAD will deliver.
at May 29, 2019 No comments:


After watching a performance of John Lennon 'In His Own Write' at the V&A in November 2016, Beatles historian Mark Lewisohn kindly shared some fascinating insights into the work at a post show Q&A with the shows creator Jonathan Glew.

For more information on the theatrical production of 'In His Own Write,' please visit: www.baldynoggin.com / www.jonathanglew.com

Email ThisBlogThis!Share to TwitterShare to FacebookShare to Pinterest
Labels: In His Own Write, Mark Lewisohn

Amazon is listing Mark Lewisohn's highly recommended Beatles biography "Tune In: The Beatles - All These Years Vol. 1" in paperback, due out May 15, 2015.

This looks to be an edition of the one-volume version of Mark's extensive biography of the band's early years. It's a great book, but I encourage those who are deeply serious about Beatles' history to get the full-meal-deal, Mark's expanded, two-book version, which is only available in hardcover. It's spendy, but worth it.