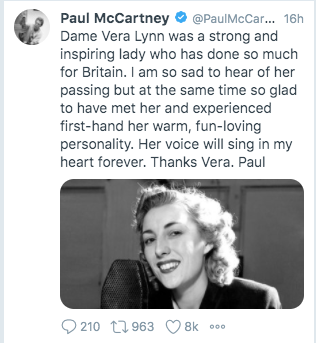 And here is Lynn singing The Beatles' "White Album" lullaby, "Good Night," followed by her cover of "The Fool on the Hill." The two songs appeared on a single she released in 1969.

And, after that, hear Lynn sing "Don't Your Remember When," which features Ringo Starr on tambourine.

Email ThisBlogThis!Share to TwitterShare to FacebookShare to Pinterest
Labels: Don't You Remember When, Goodnight, The Fool on the Hill, Vera Lynn
Older Posts Home
Subscribe to: Posts (Atom)