Many Beatles fans know the group briefly flirted with the idea of making a film of J.R.R. Tolkien's "Lord of the Rings" back in the Sixties. But what if they really had? A new comic musical explores what might have been.

Over the course of an hour Paul, John, George, and Ringo use music inspired by their greatest hits to perform their own not-so-accurate adaptation of Frodo's adventure; complete with hobbits, wizards, Native Americans, fighting, singing and dancing-all against the plottings of the nefarious Yoko Ono, who wants nothing more than to break up the band and take her "precious" John Lennon for her own.

Donovan, the guy who taught the Beatles to fingerpick, will perform several John Lennon and Beatles tunes during an upcoming tribute show.

Kim and Yoko: Posted this week on Yoko's Twitter: 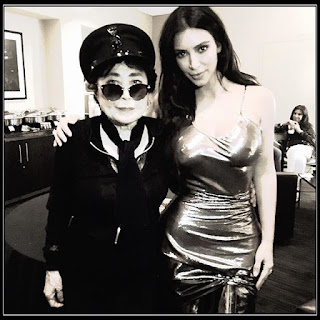 -----
The Secretly Canadian plans to reissue 11 albums by Yoko Ono, including those originally issued on the Beatles' Apple label, starting this November, Steve Marinucci reports.


The first three albums, Unfinished Music, No. 1: Two Virgins, Unfinished Virgins, No. 2: Life With the Lions, and Yoko Ono: Plastic Ono Band will kick off the series Nov. 11 and more will follow next year.