The Beatles and the Ed Sullivan Myth 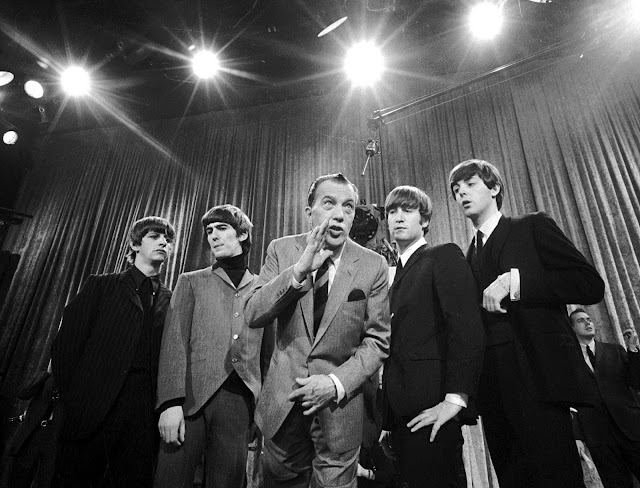 
Ed Sullivan, the story goes, booked the Beatles on his show sight unseen after witnessing Beatlemania firsthand at London Airport on Oct. 31, 1963.

Fans of the group that day shut down traffic to the airport, delaying Prime Minister Sir Alec Douglas-Home's limousine as he made his way to catch a flight to Scotland, and crowding an observation platform in hopes of catching a glimpse of their idols as they returned home from a brief tour of Sweden.

Told that the fuss was all due to the Fab Four, Sullivan famously replied, "What the hell are the Beatles?"

It's a fun story that appears in numerous Beatles books and all over the Web. It'll likely be retold numerous times today, too, on the 55th anniversary of the Beatles' famous first appearance on Sullivan's TV show.

But it's not true.

Firstly, it's highly unlikely that Ed Sullivan was at London Airport on that day - many who would know say he wasn't. Secondly, by Halloween 1963, Ed Sullivan knew damn well who the Beatles were.

Sullivan enjoyed telling the airport story - and it varied in the telling - and giving himself credit for "discovering" the Beatles on America's behalf. But he's also on record saying that he learned about the band not by witnessing Beatlemania firsthand, but by reading about the phenomenon in the newspaper.

This is most likely due to news clippings sent to Sullivan by Peter Prichard, a Londoner employed by legendary British showbiz impresario Lew Grade, who also worked as a European talent scout for the Sullivan show.

According to Sullivan's producer, Bob Precht, "if it hadn't been for Peter Prichard, the Beatles never would have appeared on Ed Sullivan."

It was Prichard's job to to keep a lookout for interesting acts to send Sullivan's way. And, in the fall 1963,there was no bigger act in England than the Beatles.

By Halloween, the group had charted two top British singles ("Please Please Me" and "From Me to You") and a top British album, secured their own BBC radio show ("Pop Go The Beatles") and appeared to a massive TV audience on "Sunday Night at the London Palladium," which was essentially England's version of the Sullivan show.

In author James McGuire's  2006 book "Impresario: The Life and Times of Ed Sullivan," Prichard called the London Airport incident "a great press story" that was likely the invention of a Sullivan publicity agent. And he recounts his efforts to get Sullivan interested in the band by sending him news clippings about the Beatles' rise to fame.
The trouble was finding an "angle" to get the group on the show. Up to that point, Capitol Records in the U.S. had refused to release any of the band's recordings, figuring they wouldn't sell, and the early Beatles releases on Swan and Vee-Jay didn't have adequate promotion to threaten the American charts. Why put these British nobodies on TV when there were plenty of American performers to choose from, Sullivan figured.

Associate producer of the Sullivan show Vince Calandra said the program's talent coordinator Jack Babb did check out a couple of Beatles concerts in England during the summer of 1963, but just "didn't get it."

Calendra also said "it makes no sense" that Sullivan would've been at London Airport in October 1963. Sullivan did spend considerable time in Europe during his summers, and was in England in September, but by October the fall TV season was well underway and it's very unlikely he would've been traveling abroad.

The TV listings for the Sullivan program for the Sundays preceding and following Halloween indicate that those episodes used at least some taped material, but it's unclear whether they were entirely taped, or if they were presented live, with Sullivan in New York. Sullivan regularly introduced taped footage of various celebrities and novelty acts during his live shows. (Thanks to Mitchell at It's About TV for the info).

Also, as McGuire notes in his book, Sullivan's twice weekly show business column in the New York Daily News indicates that he was in New York during the last week of October and makes no mention of a trip overseas. Generally, Sullivan liked providing his readers with details of his travels.

Finally, although he liked regaling people with the airport story, Sullivan is on record more than once  saying that he learned of Beatlemania by reading about it, not by seeing it in the flesh.

In a Saturday Evening Post profile published in April 1968, Sullivan says he'd "read in the newspapers that the Queen's plane had been delayed in takeoff because London was aswarm with youngsters awaiting the arrival of a vocal group - virtually unknown in this country - called the Beatles."

The detail about the Queen in this account is different (and inaccurate), but there's no mention of Sullivan being at the airport.

In a December 1964 letter to Lew Grade, published in McGuire's book, Sullivan jumbles more facts, but  makes no mention of being at the airport:

"In late September 1963 when we were taping acts in London, I locked up the Beatles, sight unseen, because London papers gave tremendous Page 1 coverage to the fact that both the Queen's flight and the newly elected Prime Minister Douglas-Home's plane to Scotland had been delayed in takeoffs for three hours. The reason: the airport runways had been completely engulfed by thousands of youngsters assembled at the airport to cheer the unknown Beatles."

Again, the Queen is mentioned, and the episode is placed in September, not October (when there was no hubbub at the airport regarding the Beatles), but Sullivan makes clear that he learned about the band via newspaper articles.

It was yet more news coverage that provided Sullivan with the right angle to book the Beatles. Shortly after the band's news-making performance on the Palladium show, the group was booked to appear on another TV broadcast, the annual "Royal Variety Performance" on Nov. 4.

The novelty of four mop-topped rock'n'rollers performing to Princess Margaret and the Queen Mother (Queen Elizabeth, pregnant with Prince Edward, stayed home) attracted media attention in the States and convinced Sullivan that, hit record or not, the Beatles were worth booking on his show.

A week later, Beatles manager Brian Epstein was in New York, arranging a deal for the Beatles to appear on three consecutive episodes of Sullivan's show (the first two live, the third taped).

"I Want to Hold Your Hand"

Shortly after Sullivan booked the Beatles, imported copies of the Beatles' latest British single, "I Want to Hold Your Hand" started getting regional airplay in the U.S., and Capitol opted to issue it - ultimately bumping up the release date by two weeks due to the song's popularity and launching a well-funded promotional campaign to support it.

The other prominent Beatles myth related to the Sullivan show is that the group refused to visit America until it had Number 1 record in the U.S. But the band was booked to visit New York more than a month before "I Want to Hold Your Hand" was released in the U.S., and the song didn't top the Billboard charts until Feb. 1, just over a week before the Beatles' first Sullivan appearance.

American teens fell in love with the Beatles' sound upon first hearing. But the Sullivan show, which allowed fans to see the group in action, sealed the deal. No matter how it actually came about, the Beatles' appearance on "The Ed Sullivan Show" on Feb. 9, 1964, secured their place as stars on both sides of the Atlantic.