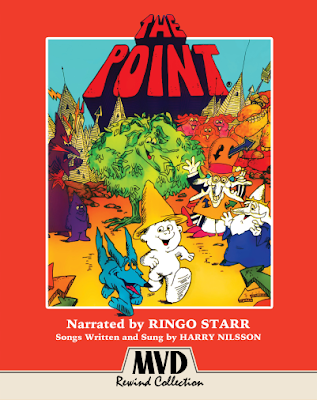 Years before he narrated the adventures of Thomas the Tank Engine, Ringo Starr told the story of Harry Nilsson's "The Point."

Now, a restored version of the 1971 animated film, which originally aired as a TV special on ABC, is set for release on Blu-ray Feb. 11. You can order it from Amazon now.

Here are details from MVD, which is releasing the film:

EXPERIENCE THE ULTIMATE EDITION OF THE TIMELESS ANIMATED MASTERPIECE!

Directed and animated by Academy Award® Winner* FRED WOLF (Free To Be…You & Me, The Flintstones), with story and songs written by Grammy Award® Winner** HARRY NILSSON and narration by RINGO STARR, THE POINT is a timeless enchanting fable for the whole family to enjoy!

Years ago there was a place called The Land of the Point, because everything in The Land of the Point had one – the barns, the houses, the cars, everything – even the people. Everyone, that is, except Oblio (Mike Lookinland, The Brady Bunch), who was born round-headed. Since he had no point, Oblio – along with his trusty dog, Arrow – was banished to the Pointless Forest. Join them to see what wonders await these two intrepid travelers as they make their way on their amazing, song-filled journey of discovery!

Due to the unknown whereabouts of some of the negative elements, the point was scanned in 2K from a 16mm release print. While performing shot-by-shot color-grading to reduce fade and improve consistency, it became apparent that the condition of the elements made a complete restoration unfeasible. As such, while thousands of individual pieces of image damage were removed entirely, some slight imperfections appear intermittently in the film.


MVD also noted it did not gain permission to include versions of the film narrated by Dustin Hoffman, Alan Thick or Alan Barzman, just the Ringo version. Nilsson narrated the story himself on his original The Point! album, released in late 1970.
at October 02, 2019 No comments: