One of my favorite Beatles interviews was performed by Harold B. Kelley, a Paris-based reporter for the U.S. Armed Forces Network, on Jan. 24, 1964.

The AFN, then as now, broadcasts to American service people worldwide.

The Beatles were in the midst of a three-week run of performances at the Paris Olympia, watching "I Want to Hold Your Hand" climb the U.S. charts and anticipating their upcoming trip to the States to appear on "The Ed Sullivan Show."

"I Want to Hold Your Hand" would hit the number 1 spot on the Billboard chart on Feb. 1, and the band would appear on the Sullivan show for the first time on Feb. 9.

Because of the timing, the Beatles are still relatively unfamiliar to American audiences, and the interview conveys their humor, personalities and history up until this point. A few weeks later, they'd be a household name in America, but not quite yet.

This 2004 article captures some of Kelley's recollections about the interview: 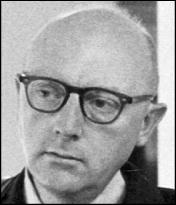 "I had been following their progress by reading the Herald-Tribune, Paris edition," says Kelley, his eyes sparkling behind large owl-glass lenses as he retells the tale of his (literally) 15 minutes of fame. "They hadn't been to America yet. They had just come back from a Scandinavian tour.

"I scooped Ed Sullivan," Kelley says. "I had called their agent to ask for an interview. He told me, 'Look, you can come over, but I think they're going to pull your leg. You won't get much from them.' Well, they ended up surprising both the agent and me by being quite sincere."

... "Frankfurt, Germany, was the headquarters for our network," Kelley explains. "Following the interview, I sent the tape by mail to our headquarters. It was received by a guy in charge of special events, Eddie Pennypecker was his name I think. He had never heard of the Beatles . So, he took the tape and just put it up on a shelf."

Eight days went by and Hal Kelley's Beatles tape had not yet aired. "I called a friend of mine who was an AFN program director, and said, 'You know, these guys are going to be on the Ed Sullivan Show in a few days. Don't you want to use it?'" AFN aired the Beatles interview the next night.


And here's a transcript of highlights from the interview. You can listen to a recording here.


Harold Kelley: This afternoon … we’re visiting with four young men and if I just mentioned their first names such as Paul and George and Ringo and John I doubt if you’d know of whom we’re speaking. But if I said we’re here this afternoon with the Beatles and we were in England I think we’d get a great big rousing “hurrah!” Wouldn’t we boys? 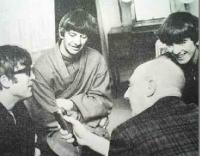 Paul: (chuckling) Oh yeah …
Kelley: Now, within the past year you have mushroomed tremendously … what was the click? What [triggered] this great rage for the Beatles?
Paul: I think it was the Palladium show, you know the television show in England and then following hot in the footsteps we had the Royal Variety Command Performance for the Queen Mother, you know and it sort of all came up from there really. The national newspapers got a hold of it … a lot of columnists and things got onto it and started calling it Beatlemania.
Kelley: Ok, let’s ask a question here with George Harrison. George, what is the status of rock’n’roll here in England today? Is that what you call your music?
George: Not really. We don’t really like to call it anything but the critics, the people who write about it, they have to call it something. They didn’t want to say it was rock’n’roll because rock’s supposed to have gone out five years ago and so they decided it wasn’t really rhythm and blues so they decided to call it the “Liverpool Sound,” which is stupid, really, because as far as we were concerned it was the same as the rock from five years ago.
Kelley: Well, can you describe the Liverpool Sound?
George: Oh, it’s more like the old rock. Everything’s a bit louder. More bass and bass drum and everybody sort of sings loud and shouts loud and that’s it!
Kelley: Well, let’s ask Ringo here – now you’re the drummer, we caught your act at the Olympia the other evening, how long have you been beating those skins?
Ringo: Oh, about five years now. I’ve been with the boys about eighteen months now but with other groups before that. But that’s five years.
Kelley: Since you boys have gained your current popularity have there been many other organizations trying to imitate you or perhaps take the thunder away from you? Let’s ask John Lennon this.
John: Well, I suppose a couple of people have jumped on the railway carriage (laughter), I mean the bandwagon, but it doesn’t really matter, you know, because it’s flattery and it sort of promotes the whole idea of us if we’re away and have left a few other little Beatles going to remind people of us.
Kelley: Well Paul, let’s go back to you for moment. When anyone ever sees your pictures the first thing that strikes them is naturally your hair-do.
(one of the Beatles, not clear who, says “hair don’t!”)
Kelley: (laughing) Or hair don’t. Some people have written as though you were having the sheepdog or perhaps an early Caesar. What do you call it and how come you cut it that way?
Paul: Well, to us it’s just a natural thing. We came out of the swimming baths one day and you know how your hair kind of flops about when you come out of the swimming baths? Well it stayed that way, you see, and nobody bothered to comb it. And it sort of stayed in the style. So we never called it anything until the papers got hold of it and they called it the “Beatles Style” so I suppose we can go along with them now.
Kelley: And you boys really haven’t had much of a chance to see Paris, have you?
Paul: No. Not really.
George: Not really, no.
Kelley: What do you think of it so far?
George: It’s nice. Quite nice, you know.
Kelley: How about the French girls compared to the British girls? John?
John: Well, I’m married so I didn’t notice them.
Kelley: Oh, well back to Paul then.
Paul: Oh, I think they’re great.
Kelley: You’re single then?
Paul: Yeah. I think French girls are fabulous.
George: We’ve seen more French boys than French girls and we can’t really tell.
Kelley: Well, perhaps when you get to the “Ed Sullivan Show” there will be more girls for you.