John Lennon's personal, signed copy of the Beatles' "butcher cover" of the U.S. Yesterday and Today LP is up for bid via Heritage Auctions.

Lennon traded the record with a collector for a tape copy of the early Beatles' bootleg Yellow Matter Custard, which featured a batch of the band's BBC recordings. I'd say John lost in the exchange!

Beatles - John Lennon's Personal Stereo "Butcher Cover" Prototype with His Original Artwork on the Blank Back and Signatures of Lennon, Paul McCartney, and Ringo Starr on the Front. The Rarest Beatle Record in the World. The term "world class" is probably a bit over-used in describing collectibles. Labeling this unique, rare, and desirable Beatles item as "World Class" is not hyperbole. If anything, it does not do it justice. Offered here is the Yesterday And Today Stereo Prototype "Butcher Cover" that was owned by John Lennon and even displayed on the wall of his Dakota apartment until the point where he had an assistant take it down and deliver it to the Record Plant where he signed it in blue ink: "To Dave from/ John Lennon/ Dec 7th 71". The recipient was Dave Morrell, a Beatles fan and bootleg collector who was in the studio showing John some of his memorabilia and bootleg material. The Butcher was given in essentially a trade for a reel-to-reel tape of the Yellow Matter Custard bootleg that Lennon desired. Lennon filled the blank back of the cover with an original piece of art in black ink. It fills the cover and depicts a man with a shovel and his dog, both posed in front of a setting sun. Interestingly, he incorporated various tears, stains, and flaws into the picture.

So far, we have a rare album cover owned and displayed by Beatle John Lennon with his autograph on the front and a piece of his original art on the back. That is enough to make it "world class." Agreed? Well, the original owner Dave Morrell managed to obtain later two additional Beatle autographs: a bold black felt tip signature "Ringo Starr" and a blue ink signature "Paul McCartney", each across their respective images. "Icing on the cake" to coin a phrase. Included with this lot is a signed Letter of Authenticity from noted Beatle autograph expert Frank Caiazzo (text below). Also includes letters of authenticity from both Gary Hein and Perry Cox (see online description at HA.com for full letters). In Gary Hein's words: ""There is no Beatles album in the world that compares with this one, in my professional opinion, in terms of both Rarity and Value." We don't feel the need to emphasize further the importance of this piece to the Beatle collector, or the Art collector, or the Pop Culture collector, or the Record collector. Don't let this one pass you by! The rarest Beatle record in the world. From the Stan Panenka Beatles Vinyl Collection.

Text of Letter of Authenticity from Frank Caiazzo dated July 18, 2005:

"To Whom It May Concern,

"The purpose of this letter is to serve as authentication of the signature and artwork of John Lennon, as well as the signatures of Paul McCartney and Ringo Starr. This is contained on an exceptionally rare blank back stereo 'butcher cover' for The Beatles 1966 LP release 'Yesterday And Today,' which was John Lennon's personal copy. All three have signed very nicely on the front cover. The blank back cover contains an amazing piece of art work, done entirely by Lennon, in which he incorporates tears, holes and stains into the actual art itself. This item was originally obtained in late 1971 by Dave Morrell, a bootleg collector who wound up befriending John and giving him a bootleg record. To show his appreciation, John gave Mr. Morrell his personal butcher and signed with a bubble coming out of his mouth, 'To Dave' and also dated December 7, 1971. The signatures of McCartney and Starr were obtained at later dates, in person by Dave Morrell himself. Needless to say, this is an amazing signed Beatles item, and the extra Lennon artwork and the fact that this was his personal LP cover, combine to make this a world class Beatles collectible.

"I hereby guarantee the authenticity of the aforementioned Beatles 'Yesterday And Today' album cover which has been signed and drawn on by John Lennon, and additionally signed Paul McCartney and Ringo Starr. This guarantee is without time limit." 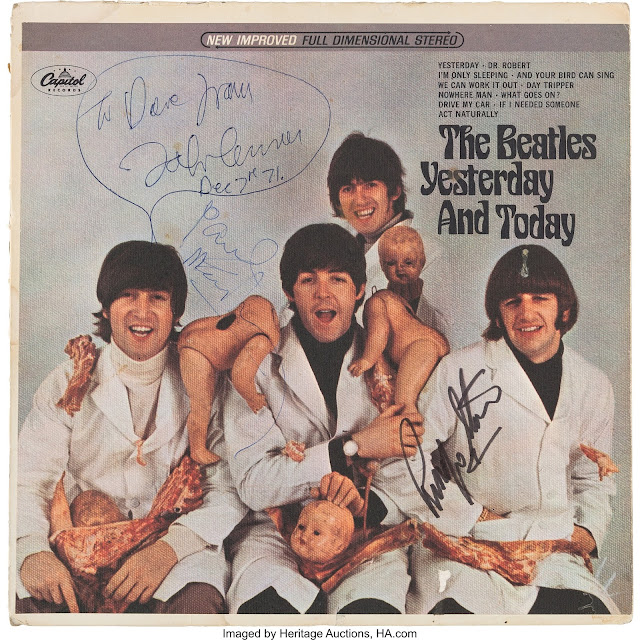 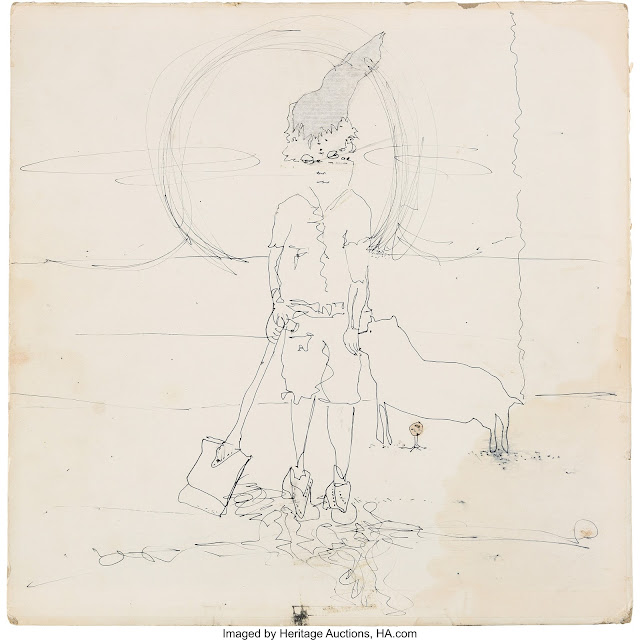 The so-called "Holy Grail" Beatles record - a 78-r.p.m. acetate Brian Epstein had made of some of the band's Decca recordings - sold for £77,500 at auction this week. 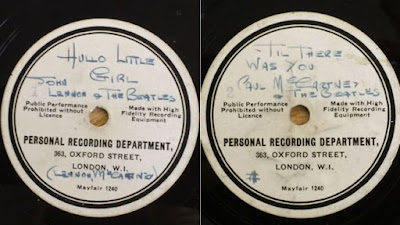 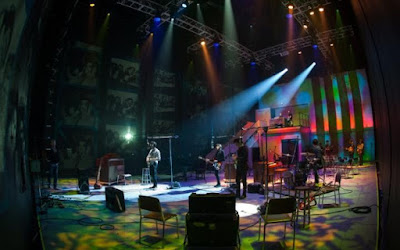 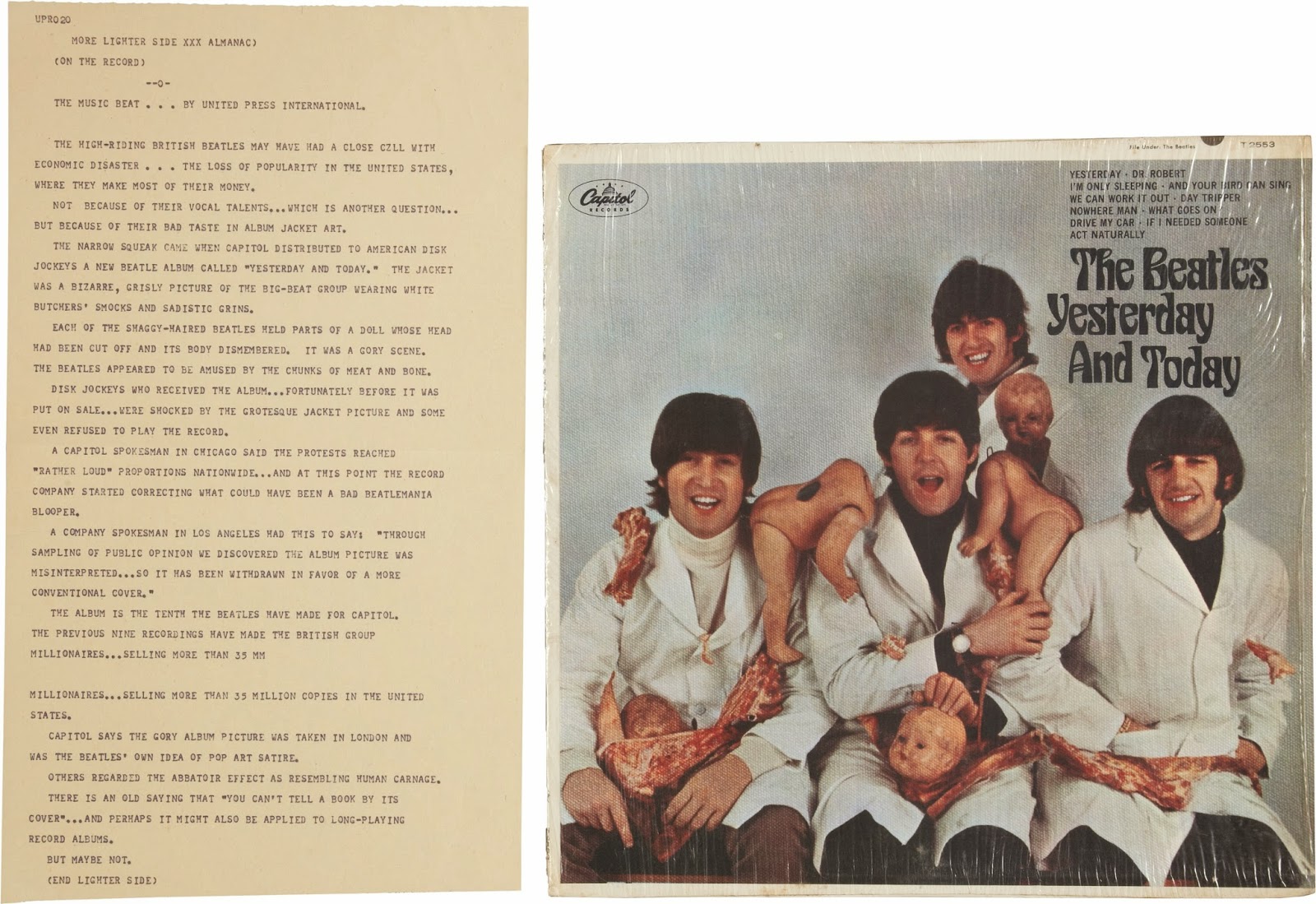