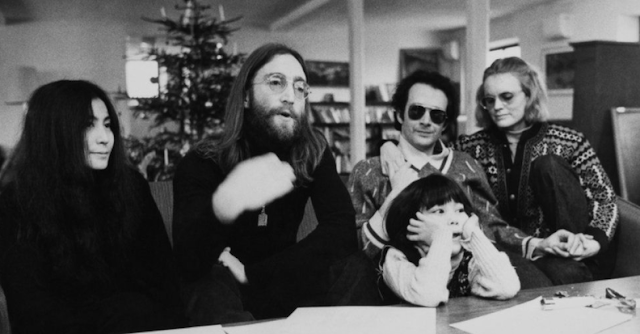 The BBC has a long story about a 33-minute tape, now up for auction, featuring an interview and some music by John Lennon and Yoko Ono recorded during their trip to Denmark in 1969.

A group of teen fans managed to meet the couple when they learned John and Yoko were staying in Thy, in the northwest of Denmark, visiting Yoko's daughter Kyoko, who was living with Yoko's former husband, Anthony Cox, and his wife, Melinda.

John and Yoko granted a small press conference with reporters once the news got out they were in Thy, and the fans were invited to attend, too.

Armed with a borrowed cassette recorder and microphone,  Karsten Hoejen taped the encounter, while his friend Jesper Jungersen took photographs.

"John asked me, 'where do you come from? A radio station?'. 'No, from a school magazine,' I said," recalls Mr Hoejen.

The meeting was "very cosy" and "relaxed". Lennon and Ono sat on a sofa, together with Kyoko, Anthony and Melinda Cox.

....At one point the couple joined in a Danish tradition and danced around a Christmas tree.

Then the former Beatle played guitar and sang the hit Give Peace A Chance.

The duo also performed a short tune called Radio Peace. It was written as a theme song for a radio station, Mr Hoejen tells the BBC.

"The radio station was never opened and the song was never released," he adds. "To our knowledge the only place where this song exists is on our tape."