The Liverpool Echo has reported the death of Pete Shotton at age 75.

Shotton attended Dovedale Infants School and Quarry Bank Grammar School with John Lennon and was an original member of the Quarrymen, playing washboard.

He fell out of the band once Paul McCartney came on board and group transitioned from skiffle to rock'n'roll. Lennon famously announced Shotton's "firing" during a drunken argument in which he smashed the washboard over Shotton's head. The two remained friends for the rest of Lennon's life, however.

Shotton operated a grocery store owned by Lennon and George Harrison on Hayling Island and stayed in close contact with the Beatles, managing their Apple Boutique and serving as the first managing director of Apple Corps.

John Lennon first confided his love of Yoko Ono to Shotton, and Shotton was present during several Beatles recording and songwriting sessions, reportedly contributing lyrics to "Eleanor Rigby" and "I Am the Walrus." He recounted his times spent around Lennon and the band in "John Lennon: In My Life," a memoir written with author Nicholas Schaffner.

You can watch a TV interview with Shotton here. 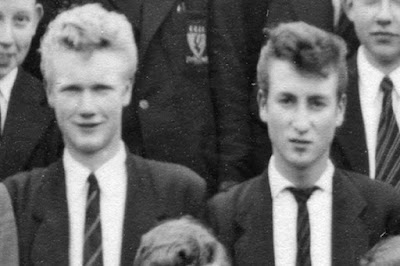 Shotton was John Lennon's best friend while growing up in Liverpool. Here's a TV interview from 1984.