An oral history of the Beatles' first American concert

It's interesting that we seem to celebrate the Beatles' first American visit each year now. I thought, sure, there would be 50th anniversary coverage in 2014. Yet, this week, I see numerous stories about the Beatles' arrival at JFK, their appearance on "The Ed Sullivan Show" and their Washington, D.C. concert.

The Washington Post, today, has a nice one, featuring numerous folks discussing the Fabs' performance in the Washington Coliseum, on Feb. 11, 1964.

Linda Binns Liles, train passenger on Feb. 11, 1964: My family was riding back [to Richmond], and we happened to be in the only car that got to see the Beatles. They walked through and gave autographs. I was like, “Well, I got two of their autographs; I think I need all four.” I was 9 years old, not a crazy teenager — when we stopped at stations, there were teenagers jumping up and down, trying to look in the windows — so I was able to get back there. I introduced myself to Ringo Starr and promptly sat down and started talking with him. “You went to New York for the first time? So did I.” We had a normal conversation. I was sure he was interested in my fourth-grade teacher as much as I was interested in what he was doing. Paul McCartney, who had me calling him Uncle Paul, asked me if I was coming to their D.C. concert, and I was like, “No, I’ve got to go to school tomorrow.” I was perfectly serious. 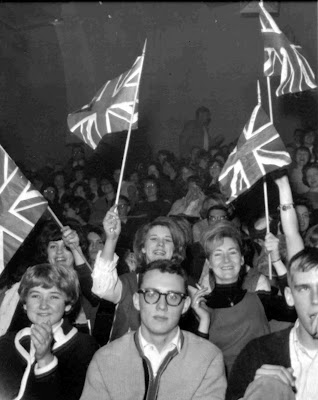