A "new" old photo of the young Beatles discovered - UPDATED


A previously unpublished photo of a young John Lennon, Paul McCartney and George Harrison has surfaced in a purchase by British music memorabilia firm Tracks Ltd., The Irish News reports.

The fuzzy photo shows the young Quarrymen in mid-song, likely playing in a Liverpool home.


Tracks director Paul Wane said: “Having seen thousands upon thousands of Beatles photos in my career, I was amazed to stumble quite randomly upon this shot of the Quarrymen amongst a collection of photos that I bought recently.”

Beatles historian and author Mark Lewisohn said: “It’s late 1959, somewhere in Liverpool, and history shines in every dimly-lit detail. Schoolboys Paul McCartney and George Harrison, 17 and 16, are rock and rolling together with art-school student John Lennon, 19."

Former Beatles drummer Pete Best confirms the photo was taken in his home: 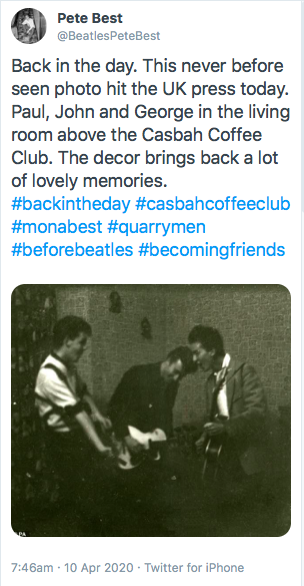