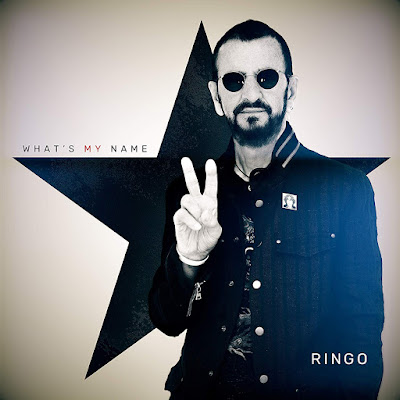 We know his name. But the question here isn't what, but "why?"

For example,  why the terrible opening track, "Gotta Get Up to Get Down," co-penned with Joe Walsh, who cringingly old man raps/rants about social media and makes Ringo sound like a guest on his own LP?

Or why the terrible (terrible!) "new wave" cover of "Money"?

And why, for the love that's all that's holy, why the Autotuned lead vocal and school recital-style string arrangement on the cover version of John Lennon's "Grow Old With Me"?

This last tune should be the album's centerpiece. It's a beautiful song. My wife and I had it played at our wedding. And Ringo, if you took off the Autotune, sounds wonderful singing it. It even has Paul McCartney playing a beautiful bassline. It should be a lovely tribute to John. But the processing on Ringo's voice, and the fact that you can barely hear Paul's backing vocals at all are a disappointment. And the string quartet arrangement is so basic and bad. I wish they'd instead used the sophisticated, sympathetic and lush orchestration George Martin created for John's recording of the song on the 1998 John Lennon Anthology. Ringo's cover of the song should've been a handwritten love letter, but sounds instead like a Hallmark card.

What's left? Not much, seeing as how Ringo doesn't release more than 10 tracks per album these days. (Is there a format that falls between EP and LP?)

There's "It's Not Love that You Want," which has a great melody and hearkens back to something off Time Takes Time (Ringo's last truly excellent album) or his association with Mark Hudson (which also produced some nice stuff). But the lyrics are dumb. The thesis is, "it's not love that you want, it's love that you need." Deep. But at least the phrase sounds like it's coming off a bumpersticker, not a t-shirt, like "Life is Good," later on the album. And, still later, there's "Send Love, Spread Peace." Another bumpersticker.

That last one also has a really nice melody. Ringo is great at 'em and I'm glad he enjoys writing tunes. But the lyrics. I love his devotion to his positive "peace and love" message. But if you took those words out of his songwriting vocabulary, there'd be nothing left. The lyrics to most of the songs here are completely interchangeable, and unoriginal. Ringo should dig deeper, find a new angle, or prod his songwriting collaborators to do so.

"Better Days," contributed by Sam Hollander might as well have lyrics from Ringo. It's the same formula: "We all face adversity, we can overcome it, peace and love is the answer."

The most "different" tune on the album is "Magic," which has a 70s AOR swagger to it and a throwback guitar solo, by co-writer Steve Lukather, to match. It sounds pretty good, but the melody stretches beyond Ringo's range at points and, again, the lyrics are half-baked.

"Thank God for Music" is another cliche put to music. The Beach Boys did the same sentiment much better several years back with "That's Why God Made the Radio."

And the album's title track, which comes last, is just sort of embarrassing, lacking all the charm of Ringo's self-referencing and self-deprecating "I'm the Greatest," provided to him by John all those years ago. With its chant of "What's My Name?" "Ringo!", this sounds like it's intended to be played live, but it likely won't be, or at least not much. Despite putting out new albums at a steady pace, Ringo rarely performs any of their contents in concert. Another reason to ponder: Why make new records, then?

The cover of "Grow Old With Me" has secured this LP with lots of media attention and many good reviews. But that's the nature of hype - it's generally empty and often used to promote things that aren't worthy. The truth is, this is a much weaker album that its predecessor, Give More Love from 2017, which was one of Ringo's best in years. That one has a nice title track (yes, more peace and love, but still), the countrified "So Wrong for So Long," and a couple of nice bonus tracks: An updated demo or "Back Off Boogaloo" and a very nice and different take on "Don't Pass Me By."

At nearly 80, Ringo needn't record any more albums at all, but I hope he does. His voice is still warm and lovable. When he has something decent to sing, he sounds fantastic. His drumming is still delightful and distinctive as hell. He's capable of something great, but it's going to take a deeper level of commitment to songcraft and a producer who's not afraid to push. The fact that this entry is disappointing is, in a way, a good thing. We expect more, and know he's capable of it.
at November 10, 2019