Coming Up: Criterion edition of 1978 Beatlemania comedy "I Wanna Hold Your Hand" 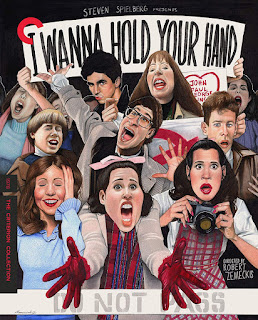 I have fuzzy but fond memories of this one. Granted I haven't seen it in many years, but my recollection is it's a quite funny look back at early U.S. Beatlemania. Looking forward to giving it a fresh viewing.

Out March 26. Pre-order from Amazon now.

On February 9, 1964, the Beatles made their first live appearance on American television on The Ed Sullivan Show, ratcheting up the frenzy of a fanbase whose ecstatic devotion to the band heralded an explosive new wave of youth culture. I Wanna Hold Your Hand looks back to that fateful weekend, following six teenagers, each with their own reasons for wanting to see the Fab Four, from New Jersey to Manhattan on a madcap mission to meet the band and score tickets to the show. With this rollicking first feature, director Robert Zemeckis and cowriter Bob Gale established themselves as a filmmaking team par excellence, adept at mining America’s cultural memory for comedy and adventure with a winning mixture of sweet nostalgia and playful irreverence.