Beatles break-up papers, with handwritten notes from John Lennon, up for auction 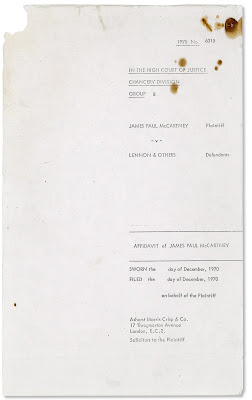 Info from Christie's. Are those blood stains on the document?!! Or maybe just cigarette burns.

The Beginning of the End: Paul McCartney's 1970 affidavit initiating his lawsuit to break up the Beatles, with John Lennon's handwritten annotations throughout countering McCartney's allegations. A historic and remarkable document that marks the official action to dissolve the partnership that had dominated popular music since 1964. On New Year's Eve 1970, McCartney took the fateful step after years of acrimony and creative differences--many of which are outlined in a series of 25 points in the present affidavit that confronted Lennon at the close of the year.

McCartney lists several main reasons that he had been "driven" to apply for formal dissolution. Firstly the Beatles had "long since ceased to perform as a group". Additionally, he deeply objected to the other three Beatles’ preference to retain the services of manager Allen Klein, whom McCartney deeply distrusted. He also contended that remaining within the Beatles was a threat to his creative freedom. Finally, he charged that no accounts had ever been prepared for the partnership since its inception.

McCartney then offers detail to support his claims, with quite a few provoking comments by Lennon in the margins. McCartney lamented the band's decision to cease touring: “Whilst we had been touring the relationship between us was very close." To this Lennon counters: "many fights on tour about leadership." As the Beatles settled into life as a studio band, they began to drift apart creatively. "Musical differences became more marked," and by the time the band recorded Abbey Road " Lennon was no longer interested "in the performance of songs which he had not written himself." Lennon countered in the left margin: "Paul was guilty of this for years". When, according to McCartney, Lennon finally expressed his wish for "a divorce", he explained, according to McCartney, that "in effect" the band had come full circle, because the band photograph to be used in Get Back so closely resembled their first album. "Never happened" exclaimed Lennon.

One of the final straws for McCartney was the issue of the timing of the release of his solo album, McCartney. Apple had sought to delay the release, an action that McCartney viewed as a threat to his creative freedom. To this charge, Lennon responded that the band "resented the high handed way in which his record 'suddenly' appeared, and demanding release dates with no consideration whatever for other Apple Products." McCartney also disliked Phil Spector's work on Let it Be, and claimed he was not consulted--something that "had never happened before". Lennon countered that it "used to happen in [the] early days". And above all, McCartney deeply distrusted Alan Klein, whom he had attempted to give "the benefit of the considerable doubt I had about him, whilst making it clear that I did not want him as a manager." But as events unfolded, he became increasingly distrustful of Klein, especially "his tendency to sow discord between us individually, by playing one of the other; his untruthfulness; and his unscrupulous efforts to hold himself out as my manager".

Between April and August there were no meetings of the band. In the latter month, McCartney wrote to Lennon "suggesting that we should 'let each other out of the trap'." According to McCartney, Lennon replied by enclosing a photograph of himself and Yoko Ono with a balloon caption asking "'How and Why?'." McCartney responded, "'How by signing a paper with says we hereby dissolve our partnership. Why because there is no partnership'." According to McCartney, Lennon's sent a card in reply, saying that if McCartney could secure the assent of the others, he would consider it. Beside the paragraph Lennon quipped: "I expect something[?] a little less 'poetic' considering his advisors had been explaining it to him for 2 yrs." McCartney then accused Lennon of making agreements pertaining to their joint publishing venture without his consent, to which Lennon countered, "no one can even get in touch with him [McCartney]."

McCartney's suit, which asked the court dissolve the partnership, "to order that partnership accounts be taken and to appoint a receiver in the interim." That "interim" would continue until 1975 as extended litigation was needed to unwind their official association. An important document marking the end of the short, yet prolific career of the most influential group in the history of popular music.
at June 08, 2018