History: The Beatles-Hollies dustup over "If Needed Someone" 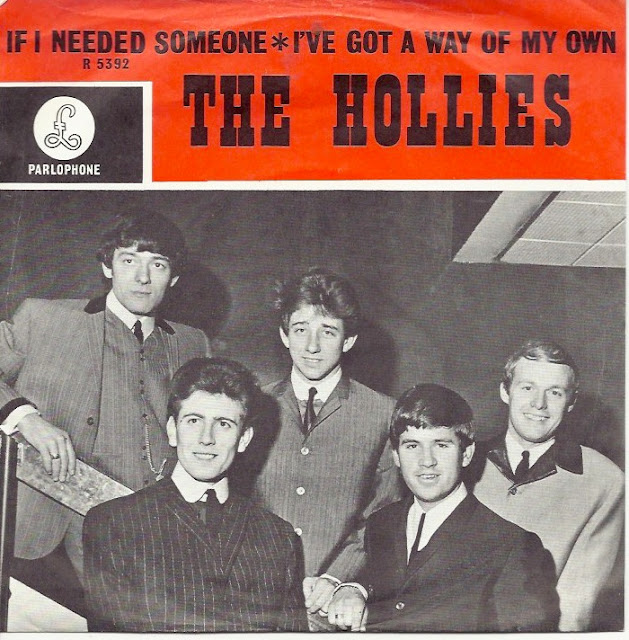 It's generally an honor when another artist covers one of your songs, but not in the case of George Harrison and the Hollies.

In late 1965, the Manchester harmony merchants released their version of George's "If I Needed Someone" as a single. George didn't like it and said so, most notably in a New Musical Express article published on Dec. 15. The Hollie's Graham Nash, in the same story, lashed back at George. You can read the exchange in the article excerpt below.

The Hollies' single was released on Dec. 3, 1965, the same day as the George-sung version came out on Rubber Soul. Maybe this was part of George's irritation.

Here, a version of his song was out as a single, while his own rendition was tucked away near the end of side 2 of the Beatles' newest LP, hidden amongst great new tunes by John and Paul. In America, Capitol didn't even include the song on its version of Rubber Soul, holding it until 1966's Yesterday and Today album.

The Hollies' version, meanwhile, hit number 20 on the charts - not a great showing by the group's standards, but not bad. The group reportedly first heard George's tune on a demo provided to their producer Ron Richards by his Parlophone colleague George Martin.

Said George, in my feature "On Tour With The Beatles": "I think the Hollies' version of my song 'If I Needed Someone' is rubbish. They've spoilt it.

"The Hollies are all right musically, but the way they do their records they sound like session men who've just got together in a studio without ever seeing each other before."

Graham Nash: "Not only do these comments disappoint and hurt us... but we are sick and tired of everything the Beatles say or do being taken as law.

"I'll tell you this much: we did this song against a lot of people's advice. We just felt that after nine records we could afford to do something like this without being accused of jumping on the Beatles' bandwagon. We thought it a good song. And still do.

"Rubbish. We don't profess to be a soul, r-and-b type group, and we never have. My opinion of the Beatles as a group hasn't changed. I still think they're great, and I'm not going to say anything stupid like, 'I'll burn all their records in my collection,' or 'I'll never buy a Beatles record again.'

"The thing that hurt us the most was George Harrison's knock at us as musicians. And I would like to ask this: if we have made such a disgusting mess of his brainchild song, will he give all the royalties from our record to charity?

"So the Beatles are the biggest group in the world, and George Harrison and the rest of them are entitled to their opinions, but when things like this are said they really must believe their own publicity.

"One thing: I'm b—— sure I don't want 'If I Needed Someone' released in America as our next disc. 'Look Through Any Window' is our biggest seller over there at the moment, and we're naturally looking for a follow-up. Normally, this would be it. But not now. It's a matter of principle.

"About that crack about us sounding like session men — I suppose he means we don't have any 'soul' in our discs.

"No. I like their music. But knocking comments like the one about us are a load of ——"

Email ThisBlogThis!Share to TwitterShare to FacebookShare to Pinterest
Labels: Hollies, If I Needed Someone