Mystery photos from the Beatles' last concert go on display

The Reclaimed Room in San Francisco next month will display a series of Beatles photos shot by a mystery photographer at the band's final live performance.

The images come from a contact sheet discovered by collector/musician David Seabury at a garage sale (why doesn't this ever happen to me?) in 1986. Nobody knows how took the photos or printed the contact sheet.

The sheet sat forgotten in Seabury's collection of photos and posters until he noticed years later how the patterned shirts the Beatles were wearing in the photos matched those seen in professional photographer Jim Marshall's images of the band's final performance at San Francisco's Candlestick Park in August 1966.

Seabury launched a Kickstarter project to get the images from the contact sheet enlarged and printed so they can be exhibited at the Reclaimed Room starting Aug. 29 - 50 years to the day of the Candlestick Park show.


“We have no other purpose other than to share these with the world and maybe root out the photographer,” Seabury told the San Francisco Gate. “We’d love to know who took these pictures. There’s no profit motive. I do this for fun. I’ve played in a lot of rock ’n’ roll bands and I don’t make a dime.”

Seabury, who also makes photographs, thinks these were taken by a talented amateur who’d gained access to the ball field where the Beatles, isolated from the screaming mob in the stands, arrived and departed by armored car. The images were taken with a half-frame 35mm camera, Seabury explains, which the pros didn’t use.

“They’re not all in great focus, but they’re beautiful shots,” he adds. “Their faces are so expressive. Nobody knew this was going to be the Beatles’ last concert. They’re still having fun, but I see a little weariness. If you read accounts of that tour, you know how messed up it was. The previous gigs had been hellish. I kind of see the road-weariness in their faces.” 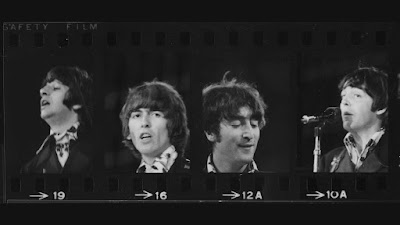