on February 05, 2016
A snapshot of George Harrison supposedly shot on his 21st birthday is going up for auction. This story says the photo was shot in Los Angeles, but the Beatles were not in that city on Feb. 25, 1964 (the date of George's 21st), but in London recording songs for A Hard Day's Night. 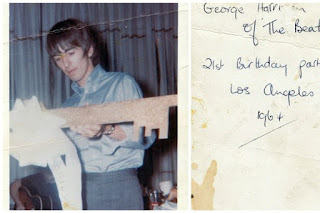 -----
Adele producer Greg Kurstin is reportedly working on the next Paul McCartney album.


A music insider revealed: “Paul loved what Greg did with Adele and knows he can add something special to his record.

“He is really embracing the pop direction of his last album and wants to continue in that vein with his new stuff.

“It’s a huge coup as Greg is without doubt the most sought-after producer at the moment.

“He was going to produce Paul’s full album but is going to work on a couple of tracks first and they will take it from there.”

Work has begun to transform the site of Liverpool's Walton Hospital - birthplace of Paul McCartney - into a community of affordable homes.

The Village Voice has an interview with former Ringo Starr collaborator Mark Hudson.


“When these artists get distraught, it’s big distraught,” Hudson said. One time, he remembers, Ringo came into the studio feeling bad about his drumming. As a response, Hudson wrote "Instant Amnesia," and its propulsive John Bonham-beat prompted Ringo back to the kit. "It moved him into something new, even though he'd done it thousands of times."

Interviewed for the BBC's Desert Island Disks, Bill Gates said the Beatles' "The Two of Us" is one of the songs he'd bring along, because it reminds him of his relationship with Steve Jobs.