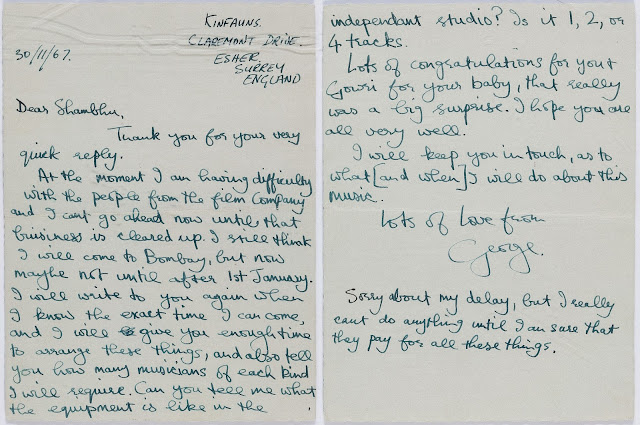 Shambhu Das assisted Ravi Shankar in teaching George Harrison the sitar beginning in 1966. When Harrison was given the commission to compose the soundtrack to the film Wonderwall, he envisioned the project as a way of introducing the West to his beloved Indian music. He contacted Das to help perform, recruit musicians, and aid in the recording of his songs during potential sessions in Bombay.

Recording had begun on November 22 at Abbey Road Studios, continued during several days in December and January, before moving to Bombay in January.

This letter brings Das up to date about his plans for these Indian sessions saying that he was "...having difficulty with the people from the film company...".

These were budgetary problems; the entire budget for the soundtrack was £600 against a final cost of £15,000 with George making up the difference out of his own pocket. He then lets Das know that he would "...tell you how many musicians of each kind I will require." This was done in a telegram dated December 29, 1967.

Harrison then inquires about the equipment: "Can you tell me what the equipment is like in the independent studio? Is it 1, 2, or 4 tracks." It turned out to be a mono recorder converted to two tracks and was hand-delivered on a train from Calcutta to Bombay.

He then congratulates Das on the birth of his baby and closes the letter with an apology about the delay, citing money problems: "Sorry about my delay, but I really cant do anything until I am sure that they pay for all these things." George did end up flying to Bombay after the first of January and the sessions took place from January 9th through 14th. Finishing touches were done back at Abbey Road in January and February, just before George and John flew to India with their wives to take part in Maharishi Mahesh Yogi's Transcendental Meditation course.

Thank you for your very quick reply.

At the moment I am having difficulty with the people from the film company and I cant go ahead now until that business is cleared up. I still think I will come to Bombay, but now not until after 1st January. I will write you again when I know the exact time I can come, and I will give you enough time to arrange these things, and also tell you how many musicians of each kind I will require. Can you tell me what the equipment is like in the independent studio? Is it 1, 2, or 4 tracks.

Lots of congratulations for you & Gowri for your baby, that really was a big surprise. I hope you are all very well.

I will keep you in touch, as to what (and when) I will do about this music.

Lots of Love from

Sorry about my delay, but I really cant do anything until I am sure that they pay for all these things.
at February 13, 2016