The Cavern Club is paying for statues of all four Beatles to be displayed on Liverpool's waterfront.

Here's a CGI rendition. So far, the statues of John and George are the only ones completed. The figures stand 8-feet tall: 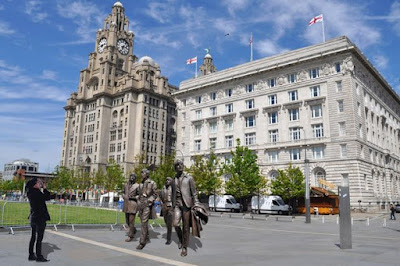 According to the Liverpool Echo the statues were the brainchild of Chris Butler of Castle Fine Arts foundry.


“A statue that needs no title, no explanation, no instruments, no gimmicks. Simply... a moment that changed the world," he said.

“A monument to a moment, when the world was truly shaken. And it started here in Liverpool.”

It's hoped that the statues will be installed by Christmas to mark the 50th anniversary of the band's final performance in the city, at the Liverpool Empire, on Dec. 5, 1965.
at August 26, 2015