McCartney drawings on auction in Liverpool

Some rare drawings by Paul McCartney, apparently from his Beatles days, will be auctioned off Aug. 29 in Liverpool.

According to the Beatles Examiner:

The sketches were discovered by the vendor in an attic, he said, and they include include Beatlesque faces drawn in ink. Each sheet also has writing by Paul McCartney on the reverse.

"This is an amazing find," said Stephen Bailey from the Liverpool Beatles Shop. "People usually think of John as the artistic Beatles but these drawings show Paul's talent for capturing an image in a quick sketch."

Also up for auction, as we reported a while back, is a weather vane from Woolton's St. Peter's Church, where Paul McCartney first saw John Lennon perform with the Quarrymen. 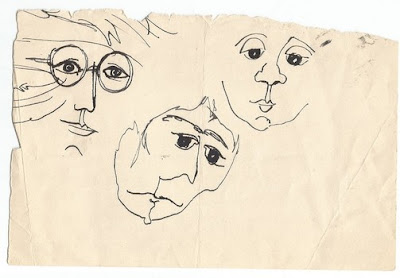