Zapple was a spoken word off-shoot of the Beatles' Apple Records label, operated by Paul McCartney's friend and biographer Barry Miles. The title is set for release in March 2016. 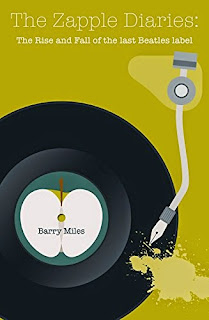 Created by Zapple label manager, Barry Miles, the acclaimed author who set up and planned the “list” in cooperation with the Beatles, and written in an engaging “diary” style, this book lets the reader gains unique insights into the lives and working methods of leading literary and counterculture figures of the era—Charles Olson, Allen Ginsberg, Charles Bukowski, Richard Brautigan, the “City Lights” poets, Ken Weaver, Frank Zappa, and many more.

Included are self-contained feature spreads on topics of particular interest to add background detail, and to introduce a change of pace for the reader—for example, on the Chelsea Hotel and its artistic inhabitants, and a feature summarizing Miles’s relentless traveling schedule.

As the author travels to and from the US and Apple HQ in London, the reader learns about the developing tensions within Apple Corps, the developing sourness between the Beatles over the appointment of Allen Klein as Apple Corps’ Business Manager—and the eventual closure of Zapple, and the breakup of the Beatles. The records issued by Zapple reveal the aims and passions of John Lennon and George Harrison as they begin to forge new identities as solo artists.

Packed with great stories—from the Hell’s Angels’ notorious visit to Apple HQ to the goings-on at New York City’s Chelsea Hotel, which became Miles’s main base when traveling to and from the US—this book also features many previously unpublished photos made by the author, plus memorabilia from the author’s archive, now held at the British Library.