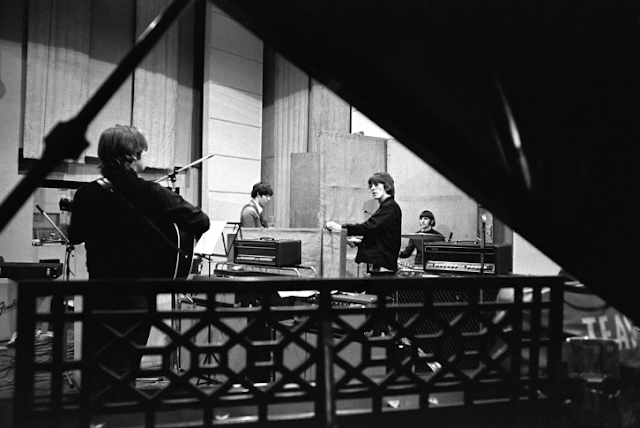 Check out Rolling Stone for an interview with Gile Martin about the new Revolver releases and a rundown of highlights among the outtakes included in the set.

A couple of examples here:

Brace yourself: Everything we thought we knew about “Yellow Submarine” is wrong. The whole world agrees on the standard origin story — a Paul ditty whipped up fast as an Uncle Ringo kiddie chant, something John grimly tolerated. But don’t be shocked if you catch yourself shedding a tear hearing John sing it. The chorus was Paul, but the verses started out as John in his sad confessional mode, with folkie guitar picking. He sings, “In the place where I was born/No one cared, no one cared/And the name that I was born/No one cared, no one cared.” The demo, on his home tape recorder, is a heart-wrenching childhood memory ballad, halfway between “Julia” and “Strawberry Fields Forever.”

“I had no idea until I started going through the outtakes,” Martin says. “This was a Lennon-McCartney thing. I said to Paul, ‘I always thought this was a song that you wrote and gave to Ringo and that John was like, ‘Oh, bloody “Yellow Submarine.”‘ Not at all. That’s like a Woody Guthrie song. But it’s beautiful in a way, where you realize that there’s so much depth behind it.” But still, what a drag to imagine a world without the Ringo version. “When you listen to the outtakes, even knowing the beauty of that John version, you know why Ringo ended up singing it,” Martin says. “And it was acutely, let’s face it, the right decision to make.”

George Martin rehearses the classical musicians for “Eleanor Rigby,” translating between them and Paul. They ask Paul whether to use vibrato on the strings, but Paul defers to Mr. Martin, who decides the vibrato would add the wrong touch of sweetness. “Let’s do it without, then,” he says. “So you only hear the vibrato when you’ve got something to say.” What a perfect proverb of his production philosophy, in one line. Martin always avoided adding anything pointless — which says a lot about how Revolver turned out as great as it did.