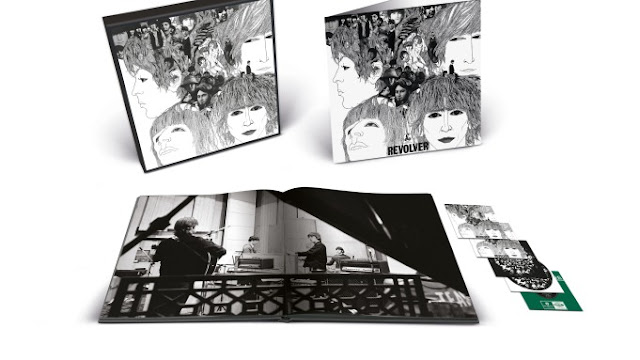 Get all the official details on the new Revolver releases here.

Variety mag interviewed Giles about his work on the new remix and box set releases.

Certainly it’s been talked about why the pre-“Sgt. Pepper” albums could be a problem for remixes. You said in the middle of 2021 that you thought the technology was arriving there, or almost there. It looks fair to say it got there?

Yeah. If it hadn’t got there, we wouldn’t have done it — it’s as simple as that. There’s always pressure, which is great. I mean, the first one we did was “Sgt. Pepper’s.” And as I’ve said before, I wasn’t that keen on doing it, and then I did a few tracks and they sounded interesting or good, and then the Beatles said they liked it, and so we did “Sgt. Pepper.” Then what’s happened is the fans themselves now sort of demand, “When do we get this? When do we get ‘Revolver’?” And there’s also forums going, “Why would you wanna remix ‘Revolver’?” and all those sorts of conversations.

But my hands were tied by the fact that there was no isolation. It was kind of designed for mono. There wasn’t much stereo around in ’66, certainly in the U.K. So on “Taxman,” for instance, everything’s on one side (or the other) — like drums and bass basically on one side, then you have vocals in the middle, and then you have a lead guitar and shaker on the right-hand side. That is exactly what I would (have to) do if I was gonna remix it (without fresh technology); otherwise you end up in mono, and then you’re just remastering.

But we did a lot of work on this for “Get Back.” And luckily, thanks to the pandemic, because it slowed the whole project, a lot more people spent more time in their rooms working on stuff than they would’ve done normally, and Peter’s team started making these breakthroughs. I was working with them. I said, “Look, should we try doing ‘Revolver’?” We started looking at that, and eventually we had all the ingredients so I could mix it. It was as simple as that. That “Taxman” track, which I’m using as a demo, (now) has guitar, bass and drums together; I can take off the guitar, I can take off the bass, and then I can even separate the snare drum and kick drum as well. And they sound like the snare drum and kick drum. There’s no hint of guitar on there (even though they’d been baked together on the master tapes). And I don’t know how it’s done! It’s like I’m giving them a cake and they’re giving me flour, eggs, and milk and some sugar.

Do you have any favorite outtakes among those that have been included?

There’s an outtake of my dad recording the “Eleanor Rigby” string session where he’s talking to the musicians about where they should play with vibrato or no vibrato. And he says to Paul in the control room, “Paul, have a listen to this.” And Paul sort of puts on this slightly posh acts and goes, “What, what?” Because obviously he’s trying to press the string players or whatever. But the surprising thing is not the conversation. The surprising thing is how the string players are fully engaged in the opinion about what they think is better, and the camaraderie they have with my dad, which shouldn’t surprise me. But I always was under the impression that in those days, the string players were a bit stiff and resented playing on this sort of stuff. And just to hear the conversation, where (the string players) say, “You know what, I think we prefer it this way.” And you can hear the difference… I always think it’s amazing when you hear that snapshot of like a 15-minute (exploration) that ends up being a three and a half minute period of time, which is just stamped forever. And we don’t even think that humans are involved at this stage. Do you know what I mean? You think iit just exists.

So there’s a few things like that … and things like “Got to Get You Into My Life,” where they’re doing that with an organ (before the horns entered the picture).