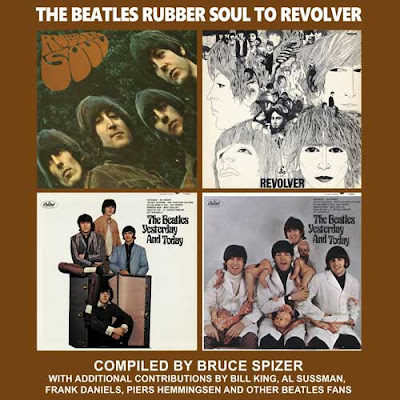 Bruce Spizer is continuing his highly recommended companion book series to Beatles albums. Next up, my two faves: Rubber Soul and Revolver.

498 Productions, LLC is proud to announce that the next installment in Bruce Spizer’s Beatles Album Series shall be The Beatles Rubber Soul to Revolver. As the name implies, the book covers the albums Rubber Soul and Revolver, as well as their associated singles and the Capitol album Yesterday And Today.

Rubber Soul and Revolver set new standards for pop and rock records. These albums presented a maturing and evolving Beatles to the world. As producer George Martin noted, “For the first time, we began to think of albums as art on their own, as complete entities.” This is not to take anything away from the quality of the songs themselves. The 16 tracks recorded during the Rubber Soul sessions are among the group’s finest, with half being included on The Beatles 1962 - 1966 hits collection. With Revolver, the Beatles were looking for more color in their recordings, trying new instruments and techniques. But they were not using studio wizardry to cover weaknesses; they were looking for new sounds to enhance their already brilliant songs.

In addition to the usual chapters on the British, American and Canadian perspectives, the book contains an extensive treatment on the Butcher and Trunk Covers, featuring all of the significant images from the photo sessions and the true story behind the controversial cover. There are also chapters on the recording sessions and album covers, as well as on the news, music and films of the era to place these albums in their proper context. And, of course, fan recollections.

Bruce indicated that nearly all of the chapters have been completed and he is now ready to solicit fan recollections. Due to space limitations, he asks that you do not submit a comprehensive overview of the topics covered in the book, but rather limit your recollections to ONE of the following topics:

Bruce is not looking for an analysis about these great albums and singles, but rather your reactions to first experiencing them. If you were one of the adventurous persons who in 1966 steamed off a trunk cover slick to get to the Butcher image below, he’d love to hear your story. If you peeled a butcher cover back in 1966, please send us a picture of how it turned out along with your story.

He is also looking for photos taken from December 1965 through 1966 of fans and these albums and singles of the era.

DEADLINE FOR SUBMISSION of RECOLLECTIONS: FEBRUARY 15, 2022