Watch: BBC "Antiques Roadshow" Segment on guitar once owned by John and George 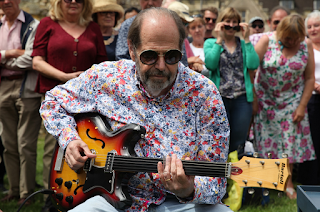 The Beatles featured on the most recent episode of "Antiques Roadshow" in England, when the show appraised a guitar once owned by John Lennon and George Harrison at between £300,000 and £400,000.

The prototype fretless guitar was manufactured by Bartell, a California company, which gave models to Jimi Hendrix and John. John later gave his to George, who gave it to the current owner, a session guitarist identified on the show only as "Ray."

Email ThisBlogThis!Share to TwitterShare to FacebookShare to Pinterest
Labels: Instruments