Continuing our look at how the Beatles Monthly Book covered the creation of Abbey Road.

Yesterday's post detailed George's walkout during the tense rehearsal sessions a Twickenham Film Studio and the band's decision to drop the idea of performing a live concert to be filmed as part of a TV special.

Instead, the rehearsal footage shot at Twickenham, recording sessions filmed at the Beatles' Apple studio and the impromptu performance on the Apple rooftop would be assembled into the "Let it Be" film. But that would take several months to edit and complete. In the meantime, the band had recorded songs they decided to include on a new album, not associated with the TV project. And that would be come Abbey Road.

An article from the May issue of the Beatles Book captures the band's projects in flux: 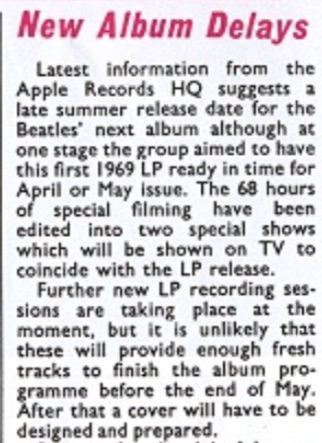 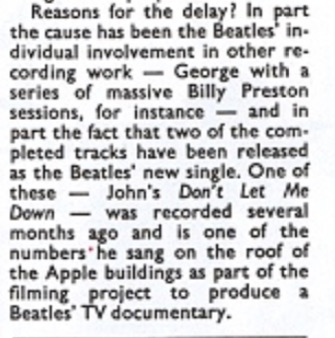 An earlier article, from March, shows how some of the songs played at Twickenham and Apple found their way onto Abbey Road:

In July, the magazine announced a plan to release an album from the TV project the very next month:

But it was announced in the next issue that this album will be delayed so it can be released in conjunction with the planned TV special, which is now a documentary of "the Beatles at work." In the meantime, the band has decided to record an entirely new album and is at work on it at Abbey Road: 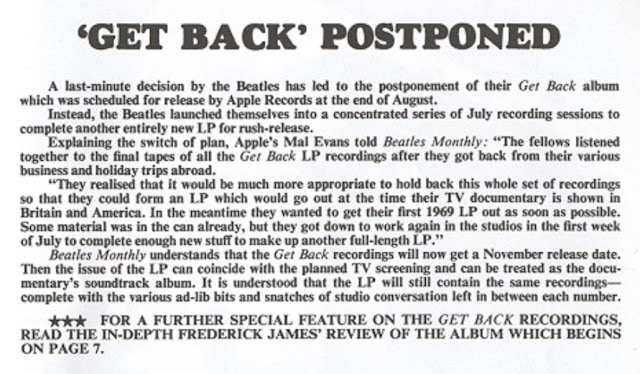 Full details of the Abbey Road album and sessions were published in the September issue. We'll feature clips from that tomorrow—the same day many of us will be listening to the 50th anniversary edition of the Abbey Road LP for the first time.

In the meantime, here's a pic of Yoko and Linda at the Apple sessions: