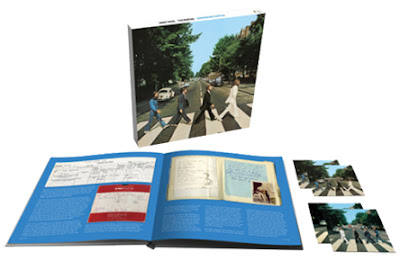 Like many of you, I suppose, I spent my weekend listening to the the Abbey Road anniversary box. And while AR is my least favorite Beatles album (something I hope to write about in an upcoming issue of Beatlefan mag), I really liked it!

I mean, how cool is it that we can now expect sets like this? After years of wondering if Apple would ever acknowledge important anniversaries of the Beatles' album releases, we're now on the verge of being spoiled. The Sgt. Pepper set in 2017 opened the floodgates and set expectations. Last year was "The White Album," this year it's Abbey Road and next year, we're all but guaranteed a Let it Be set - possibly to tie into director Peter Jackson's new documentary film of the sessions.

While I may have a quibble here and there about all of these steps, you won't catch me complaining about them. More Beatles is always better, particularly when it's unheard music, such as the session tapes included in this set and its predecessors. For me, such outtakes are the main draw, and the Abbey Road, though limited to just (just!) two CDs, there are many highlights.

For me these include:
Those are just a few things that stand out. I'm sure I'll appreciate more as I spend more time with the set.

I have to confess I skipped the fourth disk, as I don't have a surround setup. The TV is in the basement and the stereo is in the living room in my house, and I like it that way. But, at some point, I may need to invest in a modest 5.1 setup so I can check this stuff out.

I did give Gile Martin's remix a spin and I enjoyed it. To my ears, it was similar to his "White Album" in that it was almost like a live performance of the album. The vocals seem more "in the room" and there's more separation and presence to the different instruments - less of a blend than in the original mix. To me, it's a different way to hear the album. I don't think of it as Abbey Road. The original mix will remain my go-to. But it's an interesting thing to listen to, which makes me hear the music in a different and new way. One thing I really noticed on the remix was Ringo singing on "Maxwell's Silver Hammer." Much more pronounced. Like I said, interesting, nice to have, but no replacement for the original. I doubt I'll return to the remix much. I've listened to Giles' Sgt. Pepper remix only two or three times and his "White Album" remix only once. Like I said, it's all about the outtakes with me.

The book and overall package are very nice. I didn't dig into the text that much, but the info on the sessions seems well-researched and informative and the photos are excellent. There's not a lot of perspective on what was happening in the world when Abbey Road came out, as was the case in the Sgt. Pepper set, but the book is a good companion to the musical contents featured here.

Quibbles? I guess my only beef with the remix is that it is presented as Abbey Road, not as an alternative version of the original. I would've liked to see the original mix included. The remix is an adjunct to the original, in my opinion, not a replacement.

I'd also love to see Apple release a remastered-from-analog vinyl version of the original mix. I don't see any point in buying vinyl LPs that are sourced from digital.

Also, I would've liked to see more outtakes. These disks, entertaining as they are, are somewhat skimpy and could be more comprehensive. Why not, for example, include all the Abbey Road outtakes that were included on the Anthology compilations? I don't see this as a bad thing. The Abbey Road box should include it all. For example, I think leaving off the all-vocal version of "Because" was silly. Yes, it's on Anthology 3. But it's weird not to have it here, as well, particularly as there was plenty of space on the CDs to accommodate it.

Finally, the last Abbey Road listening I did over the weekend was to my original vinyl copy of the LP - orange-label Capitol, purchased sometime in the mid to late 1970s. And, despite a pop or crackle here, it sounded fantastic.
at September 30, 2019