"Pre-Fab" - The story of Colin Hanton and the Quarrymen - now in production, group to record at Abbey Road 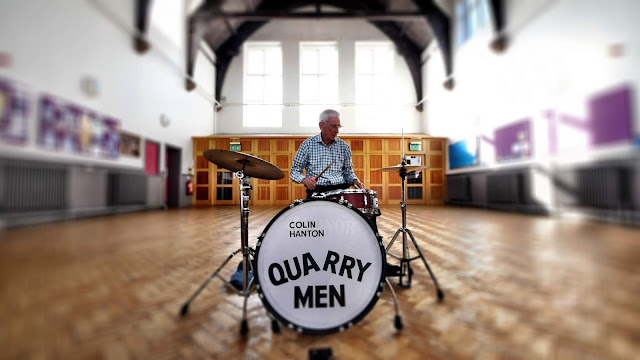 U.S-based motion picture production company Stars North's newest feature-length film, is producing a feature-length film, PRE FAB! which tells the story of Liverpool-born drummer, Colin Hanton, who was an original member of John Lennon's skiffle group, The Quarrymen, which eventually evolved into The Beatles. The film is currently in production and filming is taking place in Liverpool, London, Los Angeles, New York, and Orlando.

"Viewers of the new film will be given the opportunity to experience the beginnings of one of the biggest bands in the world and to understand how Merseybeat developed," said Mark Bentley, Producer of PRE FAB!

On July 8, 2019, the filmmakers are gathering the original surviving members of The Quarrymen band to record at the legendary Abbey Road Studio in London, the footage to be included in the new documentary, PRE FAB! Members involved include Colin Hanton, Chas Newby, Len Garry, and Rod Davis. The band members will be available for interviews at the studio during the day of the recording.

Hanton provides an up-close, personal view of Lennon's formative musical adventures, and the film gives insight into Liverpool's emerging music scene in the '50s, and the birth of 'beat music' in Merseyside.

As a fellow band member of John Lennon, Colin Hanton was an insider and he was alongside Lennon when he made his debut at The Cavern Club. He was present on that fateful day when Lennon met Paul McCartney, and he was there when George Harrison plugged in and made his on-stage debut with Lennon and McCartney in early 1958. Perhaps most fascinating of all, Hanton was in attendance when Lennon, McCartney, and Harrison made their first professional recording—their version of Buddy Holly's "That'll Be The Day." PRE FAB! captures Hanton's memories of those thrilling, history-in-the-making days with frankness and good humor.

Over a period of two years, Hanton related his experiences to Colin Hall, the acclaimed custodian of Lennon's former home in Woolton, Liverpool. In his book, also titled PRE-FAB!, Hall meticulously weaves Hanton's memories together with memories of other members of the band including Lennon, McCartney, and Harrison to provide a vivid, detailed insight into Hanton's musical career with the future superstars and the era's nascent music scene in Liverpool. Viewers will get to catch a glimpse of the creation of the area's skiffle music, the British homemade alternative to America's booming rock 'n' roll industry, and how it turned a boy band into one of the biggest music sensations, celebrated everywhere.

PRE FAB! will take its viewers through a timeline that shows how the band changed from being a group of young boys just playing music for fun to something that influenced and changed the music industry forever. Hanton witnessed Lennon and McCartney share a grand musical vision for the future as their relationship grew and they began writing original songs. For three years, he was part of the beginnings of something that was going to be phenomenally huge. Stars North™ invites viewers to partake of his journey.

Email ThisBlogThis!Share to TwitterShare to FacebookShare to Pinterest
Labels: Quarrymen