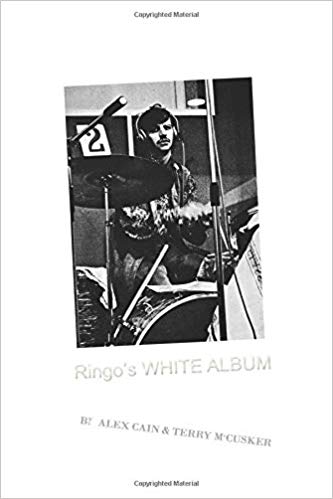 I reviewed Alex Cain and Terry McCusker's excellent book, "Ringo Starr and the Beatles Beat" for Beatlefan magazine several months back and highly recommend it for drummers, musicians or anyone interested in how the Beatles' music was constructed and why it continues to resonate with listeners today.

The pair's newest book is out now, and I'd imagine it's likely of interest to the same crowd.

"Ringo’s White Album" explores Ringo’s contribution to the Beatles’ groundbreaking double L.P. THE BEATLES, commonly known as the White Album. With so many diverse styles and genres, whether it be Rock ’n’ Roll, Blues, prototype Heavy Metal, Country & Western, Dance-Band, Ballads or Folk, Ringo once again proved he was up to the task – and then some. He also got blisters on his fingers.

With song by song analysis, discover how Ringo’s unique drumming style and approach shaped the sound and feel of the White Album. Read how Ringo’s departure from the group was dealt with by John, Paul and George, and how the group dynamic soon returned to EMI’s Abbey Road Studios. The Hey Jude/Revolution single is also covered in detail, with previously unseen photographs of the shooting of the promotional films.

Not included in the standard edition, the Deluxe Edition contains full drum scores of every White Album song (plus Hey Jude/Revolution) that features drums and percussion.

Standard version, featuring –
– Detailed exploration of the Beatles unique and unrivalled use of percussion on the White Album.
– The reasons behind Ringo’s exit from the group.
– The merits of Paul McCartney’s drumming contributions to Back In The U.S.S.R. & Dear Prudence.
– The Hey Jude/Revolution single and promo shoot (with rare, unpublished photos and eye-witness account).
Full colour paperback – 131 pages

Deluxe version as above, expanded to include full drum scores of every White Album song featuring drums and percussion, plus the Hey Jude/Revolution single.
Full colour paperback – 273 pages – 8.5″ x 11”


You can order either version from Amazon now: