Paul McCartney took "Carpool Karaoke" host on a tour of his old stomping grounds this week, much to the surprise of Liverpool residents and Beatles fans.

The Liverpool Echo reported sitings of the pair in Allerton, site of Paul's boyhood home, Penny Lane and the new Beatles sculpture near the city's Pier Head.

UDATE: The Echo also has a story saying Paul performed a surprise gig at Liverpool's Philharmonic Club on Saturday night. 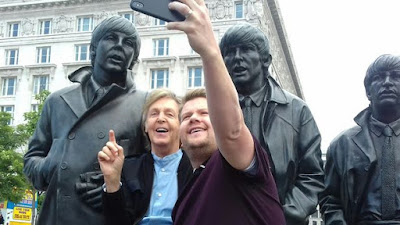 Footage of the visit was captured on video, too.