Robbie McIntosh, former member of the Pretenders and Paul McCartney band member, has a new solo album coming out next month, which pays tribute to guitar legend Chet Atkins.

Speaking about Chet Atkins, McIntosh added: “He was the first guitar hero of modern music. Chet played finger picking style but with incredible precision and because he was also a great drummer and bassist his guitar was like a band on its own – a real six string orchestra.”

The all-instrumental ‘Thanks Chet’ features covers of classics including The Kinks’ ‘You Really Got Me’, The Bee Gees’ ‘Stayin’ Alive’, and Kylie Minogue’s ‘I Can’t Get You Out of My Head’.
It also includes an original piece by Robbie McIntosh entitled ‘Thanks Chet’, which is the instrumental interlude that he brought to Paul McCartney’s 1993 world tour.
More here.

You can purchase the album from Amazon now. 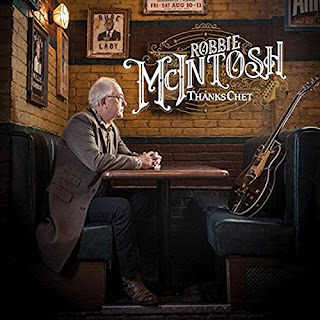 Email ThisBlogThis!Share to TwitterShare to FacebookShare to Pinterest
Labels: Robbie McIntosh, Thanks Chet