Review: Sgt. Pepper by the book(s)

The 50th anniversary  of the Sgt. Pepper album is getting its due, not only with a new remix and lavish box set from the Beatles themselves, but also with a number of new books celebrating the album's impact.

Two of these, released just a few weeks apart, are nearly identical in presentation and scope.

"Sgt. Pepper's Lonely Hearts Club Band: The Album, the Beatles, and the World in 1967" is by Brian Southall, a former EMI press officer and author of a book about Abbey Road Studios, while "Sgt. Pepper at Fifty: The Mood, the Look, the Sound, the Legacy of the Beatles' Great Masterpiece" is a collaboration by three authors: Mike McInnerney, a graphic artist active in the 1960s British underground scene, and longtime music journalists Bill DeMain and Gillian G. Garr. 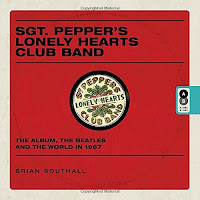 Both books tell the story of the LP, its recording and the wider world in 1967. There's a nice selection of pictures of the Beatles and contemporary images from the time.

Southall takes a broader, more generalist approach, providing a brief overview of the Beatles' entire career and also and a month-by-month look at political and cultural happenings worldwide from the year of Pepper's release. Most of the information is presented as "just the facts," with little analysis of the Beatles' impact on their times and vice versa. The book does include some nice interview material from Jann Haworth, who designed the Sgt. Pepper cover with her then-husband Peter Blake. 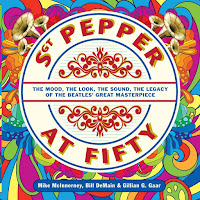 "Sgt. Pepper at 50," meanwhile, takes a somewhat deeper dive and is more British-centric. McInnerney provides a lot of first-hand details and reminiscences from his time amongst London's cutting edge artists and musicians, while Garr provides a fdetailed look at the album and all its songs, plus a section on the LP's last legacy.

There is, of course, a very nice hardcover book included in the Beatles' own Pepper box set, full of rare pictures, musical details and an underground scene chronicle from legendary record producer Joe Boyd. So, whether these additional books are also worth your investment is a question of appetite. How many Pepper books do you want/need? How much do you enjoy the pictures and information they include?

The nice thing is that we have choices like this to make. Even a half century after its release and a tendency to dismiss it as overrated or dated due to its psychedelic Summer of Love associations, Sgt. Pepper is clearly still worthy of celebration, assessment and re-assessment.
at June 02, 2017