August 1963,
in blue ballpoint on six numbered pages of Palace Court Hotel Bournemouth headed stationery, reading, Dear Astrid...I bought you all the records I told you about years ago, and they are still at home covered in dust, so if you have decided where about's you are living lately, then let me know and I will send them to you...Fat Betty has seen all the Happy holiday Photo's, hasn't she? but I haven't, oh no - you won't show them to me will you! Actually if she had not come to England with King Size, then I would still be wondering which part of the world you where in...I bought a Jaguar (car) last month, and I think you would like it. I will send you a photograph of it, with the records as soon as I get back to Liverpool...Could you look through your photographs and find some - or all of the photos that have The Beatles either all together or separately, or that have any of us with other people in them, in fact any photographs at all that may be of interest and then if you felt in a HAPPY ASTRID MOOD, do you think you could either give or lend them to me...You know that Paul and John are going to be very rich soon, when they collect the money they have made by writing all those songs, and I don't think that you would like to see me poor and hungry, so I have decided to make a book. It won't be a DA SADE type book, but a daft story about the BEATLES, with some photographs in it, and then I hope to sell it to all the nice people and then I can buy food with the money...Can't I? I would like to have some pictures that the people haven't already seen in all the other books, so that is why I am asking you. It would be very nice of you, even if the pictures were old at the Indra and Kaiserkeller and Top Ten...I have been ill all week, feeling tired all the time. The doctor gave me a tonic which is like liquid preludin. My balls have been aching too, and banging around on stage! We will be in Paris for three week in January. I will write again with the records cheerio and love from Georgie (your friend who wants the photos), together with two black and white photographs of George's Jaguar car, and a certificate of authenticity signed in 2013 by Astrid, pages 5in x 8in (12.5cm x 20.5cm), photographs 3in x 4in (7.5cm x 10cm)

This was written during The Beatles' six-night residency at the Gaumont Cinema, Bournemouth, 19th-24th August 1963. They were staying at the Palace Court Hotel and sometime during that week George was feeling unwell and was advised to stay in his hotel room. This gave him the time to write this long letter to Astrid. It also saw him write his first song for the Beatles, 'Don't Bother Me', which was recorded for the 'With The Beatles' album. It was also in the hotel that Robert Freeman took the iconic 'shadow' photograph for that forthcoming record cover.

It's remarkable that, just as the group were experiencing the fruits of their burgeoning fame, George had an eye to the future and the possible lack of funds, compared to the money that John and Paul would have made by their songwriting. Hence his idea of producing a book about the group, including photographs that had not already been widely reproduced in various publications for the fans. Of course, his doubts about financial success and longevity proved to be unfounded, following the full onset of Beatlemania! 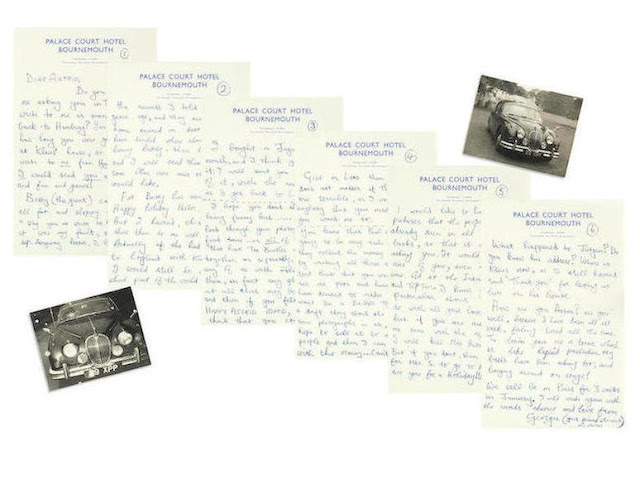