The Harrison family is marking what would be George Harrison's 74th birthday Feb. 24 with the release of a vinyl box set collecting all his albums, a Harrison-branded turntable and a new, expanded version of a his memoir/lyrics collection, "I Me Mine."


All three items are available for pre-order from the official George Harrison site.

The vinyl box set includes all twelve of George’s studio albums with exact replicas of the original release track listing and artwork. Also included in the box set are George’s classic live album Live In Japan (2LP), and two 12” single picture discs of ‘When We Was Fab’ and ‘Got My Mind Set On You’. All the discs are 180-gram heavyweight vinyl and are housed in a high-quality two-piece rigid slipcase box. The original analogue master tapes were used for the new re-masters and were cut at the legendary Capitol studios to ensure exceptional audio quality throughout. The individual albums from the collection will also be available separately, with All Things Must Pass as a limited edition title.
George Harrison – The Vinyl Collection vinyl LP box set contains:
Wonderwall Music (1968) | 1 LP
Electronic Sound (1969) | 1 LP
All Things Must Pass (1970) | 3 LP *limited edition piece
Living In The Material World (1973) | 1 LP
Dark Horse (1974) | 1 LP
Extra Texture (1975) | 1 LP
Thirty Three & 1/3 (1976) | 1LP
George Harrison (1979) | 1 LP
Somewhere in England (1981) | 1 LP
Gone Troppo (1982) | 1 LP
Cloud Nine (1987) | 1 LP
Live In Japan (1992) | 2 LPe
Brainwashed (2002) | 1 LP
12” Picture Disc Singles of ‘When We Was Fab’ and ‘Got My Mind Set On You’ (only available as part of the box set) 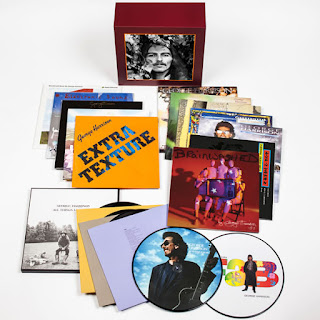 Also available, the perfect companion for the vinyl set is the George Harrison Essential III turntable. This elegant piece is manufactured and designed by Pro-Ject Audio Systems, one of the world’s leading suppliers of record players. The artwork was designed by Studio Number One based on an exclusive 2014 art-print lithograph designed for the Harrisons by Shepard Fairey. This turntable is limited to 2500 worldwide. 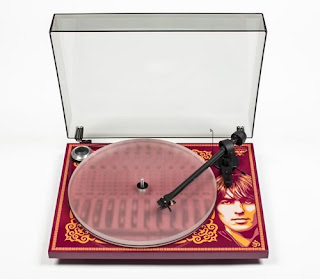 George Harrison’s I Me Mine was originally published by the specialist book publisher, Genesis Publications in 1980. It became the first of many collaborations between George and Genesis founder, Brian Roylance. In conversation with his friend and former Beatles press officer Derek Taylor, and in a first-person commentary that accompanies his songs, Harrison’s own words recount everything from his upbringing in Liverpool, to early Beatlemania, his spirituality and philosophy.  This new extended version of the book now spans the complete length of Harrison’s career in music, told in his words and through 141 songs with hand written lyric sheets faithfully reproduced in full color. Now stretching to 632 pages it features lyrics to more than 50 songs not previously included, as well as new photographs, many unpublished until now. 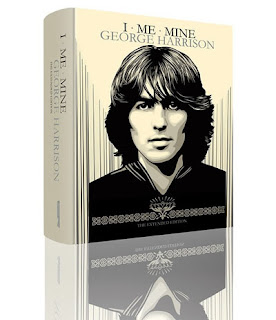